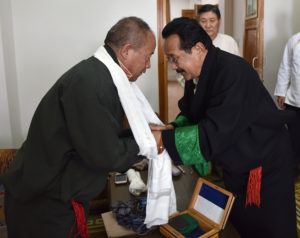 As per the customary procedure, three significant seals were handed over to the new Cabinet secretary. The first seal ‘Kadam Sishey Dickyi’ is given by His Holiness the 7th Dalai Lama and holds a great significance. The other two seals are ‘Sertam’ and ‘Taksam’ followed by signing on the official handover-take over documents, by the former and new cabinet secretary.

In an interview with the former Cabinet secretary about his experience and message for young civil servants, he indicated the significance of preserving the protocols of the Administration and to maintain and follow the rules of the administration. His service of more than 40 years reflects the current state of the CTA.

“It gives me immense pleasure to hand over the work to a capable and deserving candidate,” said Topgyal Tsering Zongkha. He was fortunate to have worked under His Holiness the Dalai Lama while advising young civil servants to work hard with sincerity.

He further talked about the significance of the traditional way of handing and taking over of a designation and urged to keep the tradition alive.

The event was concluded with both former and newly appointed Cabinet Secretary greeting the staffs of Kashag individually. 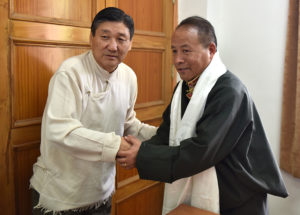 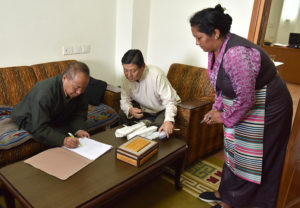 Mr. Tsegyal Chukya Dranyi signing on the official documents in the presence of Mr. Sonam Dagpo, Secretary of DIIR and spokesperson of CTA. Photo/Tenzin Phende/DIIR.