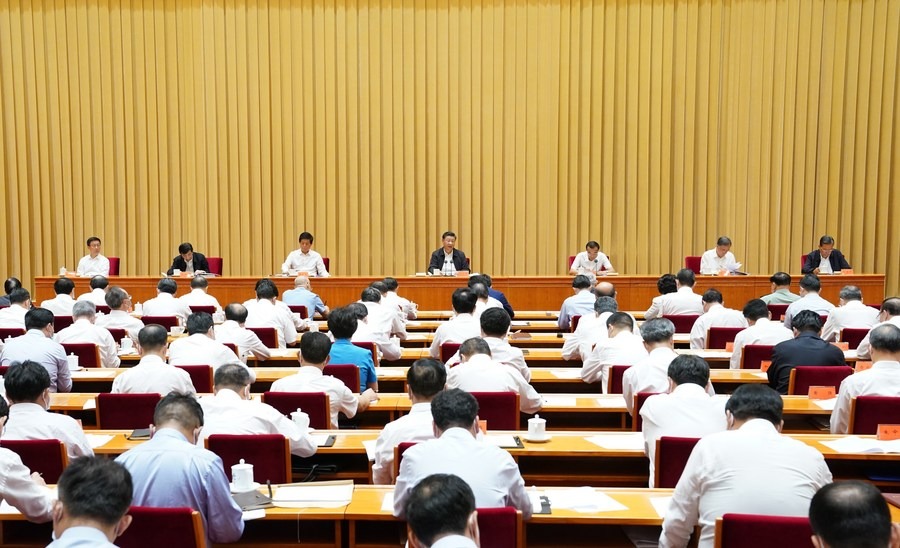 President Xi Jinping who is also the general secretary of the Communist Party of China Central Committee and chairman of the Central Military Commission during a high-level meeting on Tibet work in Beijing. Photo/Xinhua

Chinese President Xi Jinping has recently delivered a fiery long speech calling China to build an “impregnable fortress” to maintain stability in Tibet, protect national unity and educate the masses in the struggle against “separatists”, at the two-day [28th and 29th Aug] 7th Tibet Work Forum attended by the senior Communist Party leaders in Beijing on Saturday.

Unlike the past Work Forums, the event and Xi’s speech was widely covered and circulated in the local and international media circles. It was hailed in the official Chinese media as “setting policy direction for Tibet”.

Xinhua News, one of the Chinese Community Party’s (CCP) official mouthpieces, quoted Xi as saying, “Efforts must be made to build a new modern socialist Tibet that is united, prosperous, culturally advanced, harmonious and beautiful. Work related to Tibet must focus on safeguarding national unity and strengthening ethnic solidarity. More education and guidance should be provided for the public to mobilize their participation in combating separatist activities, thus forging an ironclad shield to safeguard stability.”

The language and the contents of Xi’s speech clearly reveal Xi’s acknowledgement of instability in Tibet and betrays the CCP’s complete policy failure in the region. The top Chinese leadership’s speech stands out as a clear testimony to the fact that China has nothing worth to boast of achievements benefitting Tibet and Tibetans in all these seventy years of occupation. No wonder, it has not been able to win the natives’ trust and loyalty. China has only tried to exploit Tibet of its mineral resources and militarize the land to further its expansionist policy in and around the region.

China has always claimed that it has “liberated” Tibet and Tibetans from “feudal slavery” and transformed the region into a “socialist paradise”. It claimed development, democratic reform, human rights and religious freedom. Then, why this sudden urge and rhetoric to build “a new modern socialist Tibet”? What happened to the “socialist paradise” it boasted of all these years?

Why the efforts to focus on safeguarding national unity and strengthening ethnic solidarity? Why the need to build impregnable fortresses and the need to fight separatists in Tibet?

This tantamount to say that even after seventy years of occupation and indoctrination, Tibetans have not accepted and are still resisting the Chinese communist regime and its repressive policies. The Chinese leadership has now realized that the Tibet issue has become an international issue and it has turned into the Achilles heel of the CCP.

His Holiness the Dalai Lama way back in 1988 said, “The Chinese leadership needs to realize that colonial rule over occupied territories is today anachronistic. A large genuine union of association can only come about voluntarily, when there is satisfactory benefit to all the parties concerned. The European Community is a clear example of this. On the other hand, even one country or community can break into two or more entities where there is lack of trust or benefit, and when force is used as the principal means of rule.”

Had Chinese leadership really taken care of Tibet and Tibetans, the situation would have been different today. The fact is Tibetans have greatly suffered and are still suffering under the brutal communist regime. More than 154 Tibetans have self-immolated since 2009 to protest the Chinese repressive policies. The seventy years of Chinese occupation has been a long nightmare of repression and discrimination.

China replaced Tibetan language with Chinese mandarin as a medium of instruction in schools. It forced the Tibetans to replace the photo of His Holiness the Dalai Lama with Xi Jinping’s photo in their homes and banned hoisting Tibetan prayer flags and children from visiting and studying at Tibetan monasteries. The 11th Panchen Lama, one of the highest Tibetan reincarnate Lamas, has been kidnapped along with the family members since 1995, and his whereabouts are still not known. To add insult to injury, China appointed its own puppet Panchen Lama and is now forcing the Tibetans in Tibet to venerate him.

In such a scenario, how could the Chinese leadership expect Tibetans to show respect and loyalty to the regime? Stability and unity cannot be achieved through guns and repression, China needs to respect Tibetan culture, religion and the people’s sentiments. Xi’s policy to get the “Tibetan Buddhism adapted to socialism in the Chinese context” will not only hurt the Tibetans, but it will also earn the wrath of all people along the Himalayan belts, and condemnation from the international community. This is a gross violation of religious freedom and the Chinese constitution itself.

China Daily quoted Xi as saying, “More work, measures and support are needed to consolidate the achievement made in poverty alleviation.”

Tibet has never been a poor country. External material achievements only do not measure poverty; it is the welfare and happiness of the people that is important. Tibetans lived self sufficiently and contentedly with high spiritual achievement. Famine and starvation are unheard of in Tibet, but with the Chinese occupation, Tibet experienced famine twice in 1961-1964 and 1968-1973 and many lives were lost. So what “poverty alleviation” is Xi talking about?

There may not be proper cemented roads, highways, railways and airways before, but Tibetans travelled freely with their animals. Today, there is constant monitoring and surveillance, leave aside travelling abroad, Tibetans are not even allowed to travel within Tibet. What development is this?

To sum up Xi’s speech, while betraying CCP’s policy failure, it clearly forebodes bad and harsh times for the Tibetans in Tibet. It ordered stricter measures of surveillance in Tibet and asked for adaptation of Tibetan Buddhism to the communist ideology. The message is not good for India and the neighbouring countries too; China has now gone to the extent of militarizing the holy site of Mount Kailash and Lake Mansarover by establishing military bases and missile stations there.

It is using the Buddhist land and the sacred abode of Lord Shiva and his consort Parvati to attack the land and people of Buddha and Shiva Mahadev. What is happening at the Indian borders, and its covert activities in Nepal and the shady Belt and Road Initiative projects are all clear indications of CCP’s expansionist policy. In order to realize this hegemonic ambition, China is hardening its stand on Tibet, building an “impregnable fortress”.

India and the international community need to look at Tibet not as a problem, but as a solution. China is using Tibet to achieve its expansionist plans. Restoration of Tibet’s century-old role as a buffer state between India and China, and declaring it as a “Zone of Peace” as proposed by His Holiness the Dalai Lama is the ultimate solution to peace and stability at the borders and to harness the fiery dragon.

Lastly, another school of thought has it that there are little teeth in Xi’s word, he is putting on this strong aggressive garb only to divert the increased internal criticism he has been facing since the outbreak of Coronavirus pandemic.