With Ma Zhaoxu at UN Headquarters, China Pushes for Globalisation with Chinese Characteristics 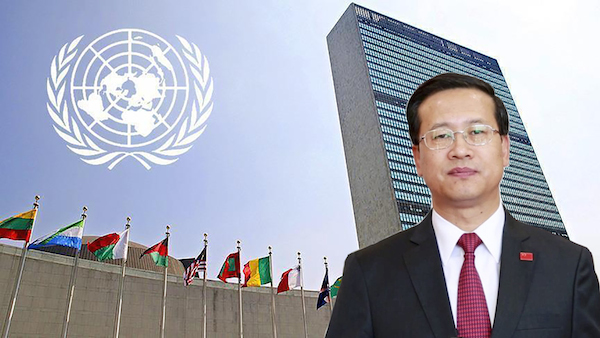 Ma Zhaoxu, China’s former top envoy at the United Nations office in Geneva, known for spearheading China’s campaign of advancing ‘human rights with Chinese characteristics’ is now speculated to step into a bigger role, that of the permanent representative at the United Nations headquarters in New York.

Ma Zhaoxu, a veteran diplomat who has previously served as China’s ambassador to Australia and spokesperson for the Chinese foreign ministry is not a new face at the United Nations.

The appointment, if confirmed, signals how Beijing plans to roll out President Xi Jinping’s new era of global power diplomacy, a diplomacy that calls for globalisation with Chinese characteristics.

It is no secret that China’s strongman President Xi Jinping harbours global ambitions. He has spelled out his vision at the 19th Party Congress last October when he said, “It will be an era that sees China moving closer to center stage and making greater contributions to mankind.”

Since then, China has initiated a renewed foreign policy of muscular diplomacy. This was evidenced once again at Xi’s address at the annual ambassadors’ conference in December last year where he advocated a global vision and a more proactive role for China.

In its push for global prominence, China has outlined the United Nations as a key platform in its efforts to redefine its international relations and the world order.

And the appointment of Ma Zhaoxu at the UN headquarters is simply just one aspect of a wider campaign of President Xi to push China’s one-sided narrative abroad and to shape popular opinion. It is also an opportunity for the international community to get an inkling of the future role President Xi aspires for his country to play within the powers of corridor at the United Nations.

Although the UN has given China the platform to advance its goals for decades, President Xi has upgraded Chinese engagement into an even more visible role at the UN aided in no small way by the reluctance of the Post-Trump United States government to push for leadership at the UN and in pursuing its global responsibilities. Moreover, no other permanent members of the UN is as clearly committed to the UN forum for multilateral diplomacy and conflict resolution as China, thus making it easy for China to claim the UN leadership role.

Already, China is the largest contributor of troops to the UN peace keeping force. And by 2019, China is set to supersede Japan as the UN’s second-largest financial contributor.

Despite all these signs, China’s stewardship of United Nations and alongside globalisation, is not without its share of controversies and discrepancies.

China has long been accused of maintaining a selective approach to globalisation, picking and choosing what parts of globalisation to engage with and, disregarding and disrespecting those that are not aligned with China’s national interest.

China’s policies in the South and East China Seas as well as on the borders of India have unsettled the region. It raises further doubts about China’s willingness to commit to multilateral solutions and international law if it regards it as not being in its interest.

There is also a growing evidence of China’s sharp power, where it uses coercion rather than soft power, to influence others. Countries like Australia and New Zealand, are now waking up to this threat of China’s predatory foreign policy.

Moreover, China’s governance model at home is fundamentally at odds with the values espoused by the United Nations. China continues to practice repressive and authoritarian policies within its own borders. Kidnapping of writers, arbitrary detention of peaceful protesters, silencing dissent, human rights violations are some of the perennial themes that plague China.

Therefore, the mutually beneficial relation between the United Nations and its most populous member state will continuously be challenged by these contradictions.

The UN, despite the bad press that it continues to get, is still one of the few international institutions that have not lost its relevance. And China is clearly aware of it, and sees the organisation as key to derive legitimacy.

Therefore, with the appointment of Ma Zhaoxu as its top envoy at the UN headquarters, China only seem to consolidate its goal of globalisation. But it remains to be seen whether China will manage to bridge the gap between the UN’s liberal ideology and its own repressive nature.

The sooner China bridges this gap, easier it will become for them to sell its rhetoric of China’s global leadership and peaceful rise as a world power. Or else, it will always be viewed as the hand of darkness that is hell-bent on dominating the world.