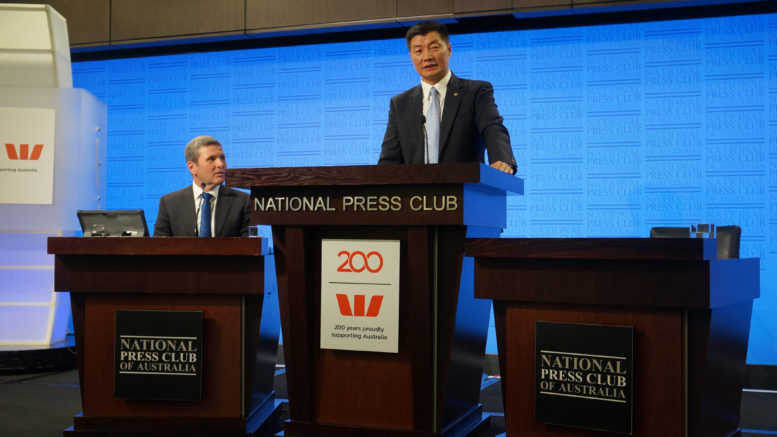 President of CTA, Dr. Sangay during his address at the National Press Club of Australia based on Canberra

Exactly a month ago, on Tuesday, August 8 of this year, the President of Central Tibetan Administration Dr Lobsang Sangay during his high-profile tri-city tour of Australia, spoke on the topic -‘‘Tibet and Australia: How Can Democracies Survive a Rising China” at the prestigious National Press Club of Australia based on Canberra.

The talk was attended by top notch journalists and editors from Australian based dailies and media houses. Chris Uhlmann, seasoned writer and Journalist, was prolocutor to the talk.

In his address Dr Sangay reiterated the importance of understanding the Tibetan narrative to understand China.
“If you understand the Tibetan story, the Chinese government [before the military takeover] started building a road – our first ever highway in Tibet.”

“Now, we were promised peace and prosperity with the highway, and our parents and grandparents joined in building the road. In fact, they were paid silver coins to help them build the road…”

“So my parents told me the Chinese soldiers with guns were so polite, so nice, the kids used to taunt them and taunt them, they always smiled. They never said anything. Then they built the road. Once the road reached Lhasa – the capital city of Tibet – first trucks came, then guns came, then tanks came. Soon, Tibet was occupied. So it started with the road,” said Dr Sangay.

While comparing China’s current international infrastructure project with that road, Dr Sangay said “So that was the consequence of One Belt, One Road in Tibet.”

The similarity between the road in Tibet and Xi Xinping’s signature global infrastructure project bears an uncanny resemblance. So far, 68 countries have signed up to the mighty vision of an interconnected system of road, rail, ports and bridges embracing most of the world’s population and connecting Europe to Asia and the Pacific through China on land and sea.

According to Dr Sangay the primordial goal of the Chinese Communists was to make Tibet into China and Tibetans into Chinese. “From the very beginning they wanted to destroy the foundations of Tibetan civilization, culture and identity”.

Dr Sangay acknowledged China’s economic rise and its efforts to lift millions out of poverty but at the same time echoed what Chris Uhlmann said – that with great power comes great responsibility and the nature of a truly great power is how it treats its people and powers that are weaker than it is.

Strong trade bonds characterize Australia-China relations. China is Australia’s largest trading partner, while Australia is a leading source of resources for China. In 2013, China and Australia agreed to establish a prime-ministerial level dialogue between the two countries, which makes Australia one of only a handful of countries to have such a dialogue.

In recent years, there have been concerns over Chinese investment in Australia, Beijing’s establishment of an air-defence identification zone in the East China Sea, and the arrest of ethnically Chinese Australian citizens in China, among others.

The “Belt and Road” Chinese infrastructure could prove to THE GRAND STRATEGY of China in designing its position to be the number one global player thus dwarfing other potential superpowers including Australia.

Dr Sangay is right when he says, “What happened to Tibet in 1950 could happen to you.” Far from being an alarmist or a Chicken Little, President Dr Sangay is being a far-sighted prophet, foreseeing the adverse effects of an adversarial nature of China’s expansionist policy and thereby forewarning the potential preys to China’s grand strategy. 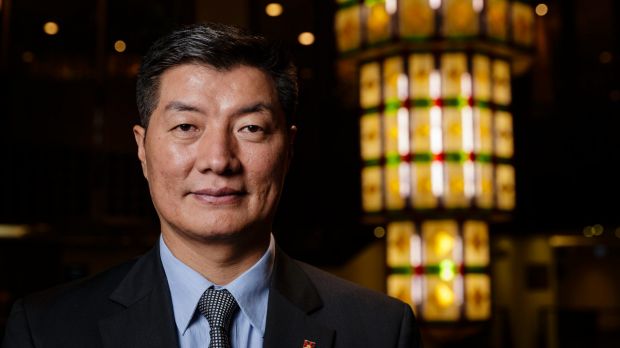