Why are Tibetans burning In Tibet and starving in New York?

China is on high alert in Tibet every March due to sensitive political anniversaries. Tibetans commemorate the March 1959 uprising against Chinese rule and the flight into exile of their spiritual leader, the Dalai Lama. Beijing annually deploys a massive military force to discourage Tibetans from demonstrating any form of dissent, peaceful or otherwise.

The entire Tibetan region has been effectively under martial law for months as China rolls tanks and stations paramilitary throughout the region.

Tibetans are burning themselves to death in protest of China’s iron grip on their homeland. 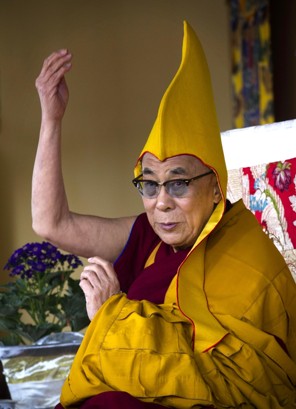 These fiery protests are because Tibetans feel their identity, language, and religious faith is under assault by the Chinese government.

The method of self-immolations has been essentially the same. Dousing themselves in gasoline, Tibetans set themselves alight standing in town squares and in front of Chinese government buildings. As they become a human torch, they shout, ‘’Return the Dalai Lama to Tibet,’’ ‘’Freedom in Tibet,’’ and ‘’We want human rights.” Most have succumbed to a gruesome death; others have been taken away by Chinese security personal.

Self-immolations as a form of protest had not occurred in Tibet until two and a half years ago. Since then, thirty Tibetans, mostly monks and nuns, have set themselves on fire.

These extreme forms of protests are a response to China’s extreme repression of Tibetans. For a Mahayanist Buddhist perspective one can examine a letter written over fifty years ago by Thich Nhat Hahn, a leading Buddhist monk from Vietnam, to Martin Luther King, Jr. explaining the self-immolations by Vietnamese monks in 1963. These searing images haunted the world, and Nhat Hahn’s words offer insight into the mind of the protestor.

“The Vietnamese monk, by burning himself, says with all his strength and determination that he can endure the greatest of suffering to protect his people. What he really aims at is the expression of his will and determination, not death. To express will by burning oneself, therefore, is not to commit an act of destruction but to perform an act of construction, that is to suffer and to die for the sake of one’s people.”

The self-immolations have a pattern. They have occurred where China has spent the most money on security, which is attempting to strangle Tibetan nationalism, and where China is implementing stringent patriotic re-education in monasteries. This “education” promotes loyalty to the Chinese party-state and vilifies the Tibetans’ leader, the Dalai Lama, as nothing other than a terrorist in a monk’s saffron robe. In other words, where Tibetans have been pushed to the edge, some have decided to jump into fire.

Graphic video smuggled out of Tibet and China has shown policemen standing over still smoking monks and nuns with their skin charred black, still alive, waiting to make arrests. In two cases, according to the International Campaign for Tibet, police have reportedly beaten, and even shot, monks after extinguishing the flames.

Tibetans and supporters of a “Free Tibet” hold placards while marching through downtown Los Angeles on March 10, 2012 in California, joining thousands of Tibetans and Tibet supporters worldwide taking to the streets to mark the 53rd Tibetan National Uprising Day

China’s Foreign Ministry has condemned the self-immolations and accused the Dalai Lama and Tibet support groups in the West of encouraging them. Ministry spokeswoman Jiang Yu has called such alleged support “violence and terrorism in disguise.”

The Dalai Lama has said China’s “ruthless policy” in Tibet is driving Tibetan monks and nuns to such extremes measures.

The Tibetan government-in-exile in India has described the self-immolations as tragic, and called for pressure from the international community on Beijing to open a dialogue on its policies in Tibetan regions of China.

Demonstrating solidarity with the Tibetans in Tibet, three Tibetans in the U.S.began a hunger strike on February 22 outside the United Nations headquarters in New York asking for the UN to send a fact finding mission to Tibet, among other demands.

After two weeks, UN Secretary General Ban Ki-moon expressed his concern for the health of the hunger strikers, but said nothing of the situation in Tibet. A few days earlier, Assistant Secretary General Ivan Simonovic met with the three hunger strikers who told him they want “concrete action” by the Chinese authorities to ease the ongoing crackdown in Tibet before they would consider ending their hunger strike. Mr. Simonovic said he would convey the group’s concerns to Geneva.

This Monday, day 27 of the hunger strike, the New York Police Department removed one the eldest of the protesters, Dorjee Gyalpo, and admitted him to a hospital. Gyalpo pleaded unsuccessfully with the police to allow him to continue his hunger strike until the UN responded.

As Shingza Rinpoche and Yeshi Tenzing, the two remaining hunger strikers in New York, approach nearly a month with no food, the tepid UN response has not convinced them to stop their protest.

Tibetans who are lighting themselves on fire, and the few Tibetans refugees who are willing to starve themselves to death in front of the UN, are under no illusions that international pressure will succeed. Yet, they continue.

Sobha Rinpoche, an esteemed Tibetan teachers who died on January 8, 2012 after drinking gasoline and self-immolating in eastern Tibet, left an audio testament in which captures the essence of the latest protests in Tibet, and in New York.

“I am giving away my body as an offering of light to chase away the darkness, to free all beings from suffering.”

Matteo Pistono is a writer, practitioner of Tibetan Buddhism, and author of “In the Shadow of the Buddha: Secret Journeys, Sacred Histories, and Spiritual Discovery in Tibet.”