“Wherever Tibetans are, we all have a body of blood, flesh and bone that is Tibetan”: His Holiness to Tibetans in Swiss 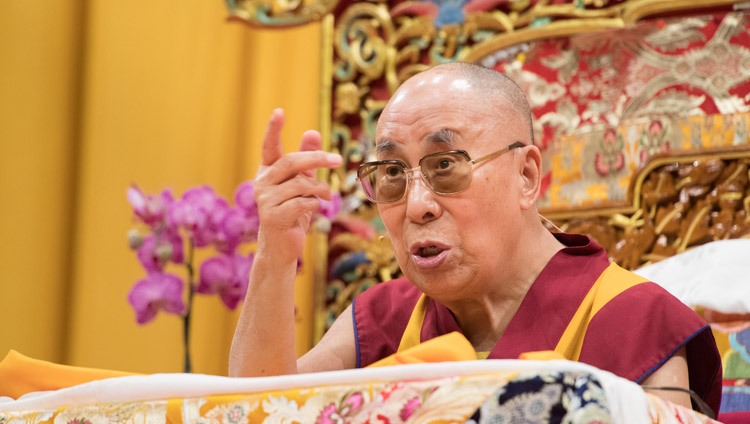 His Holiness the Dalai Lama giving an introduction to Buddhism at his teaching at the Zurich Hallenstadion in Zurich, Switzerland on September 23, 2018. Photo by Manuel Bauer

Zurich, Switzerland: His Holiness began his teaching by giving an introduction to Buddhism and thereby the importance of practicing calm and abiding mind which His Holiness claimed was a common practice of Indian Spiritual traditions.

“By cultivating calm abiding we try to eliminate the mind’s distractions,” His Holiness clarified. His Holiness further reiterated that calming mind is developed in nine stages, which are explained in the ‘stages of Meditation’.

His Holiness attributed the practice of meditation as the revelation that Buddha discovered that clinging to a distorted view of self is the source fall problems.

His Holiness then gave an elaborate explanation on Four Noble Truths and the perfection of Wisdom teachings that Buddha preached to His five disciples that are preserved in 100,000 verses, 25,000 verses, 8,000 verses, 150 verses.

His Holiness noted that there was a custom of honouring the ‘Six Ornaments and Two Supremes’, great Indian Buddhist masters of the past, which he considered incomplete. To rectify this he composed a ‘Praise to the 17 Nalanda Masters’ and commissioned a new thangka to illustrate it. 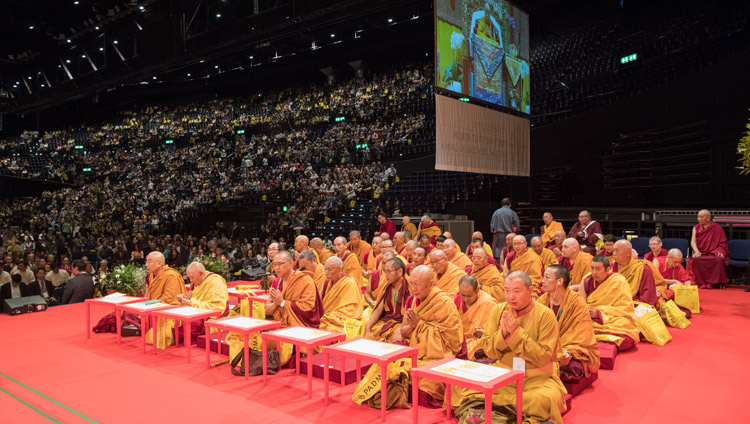 Senior members of the Tibetan monastic community sitting on stage at His Holiness the Dalai Lama’s teaching at the Zurich Hallenstadion in Zurich, Switzerland on September 23, 2018. Photo by Manuel Bauer

His Holiness then discussed the Two Truths, conventional and ultimate truth. “My experience of emptiness is such that if I make an effort I can understand it. Relying on Shantideva’s ‘Guide’ I can see the faults of the self-cherishing attitude—cultivating bodhichitta can overcome them” claimed His Holiness.

His Holiness further exerted that western writers in the past dismissed Buddhism as Lamaism but now those scholars recognise the authentic traditions of Nalanda.

Following which, His Holiness gave the Bodhisattva Vows. 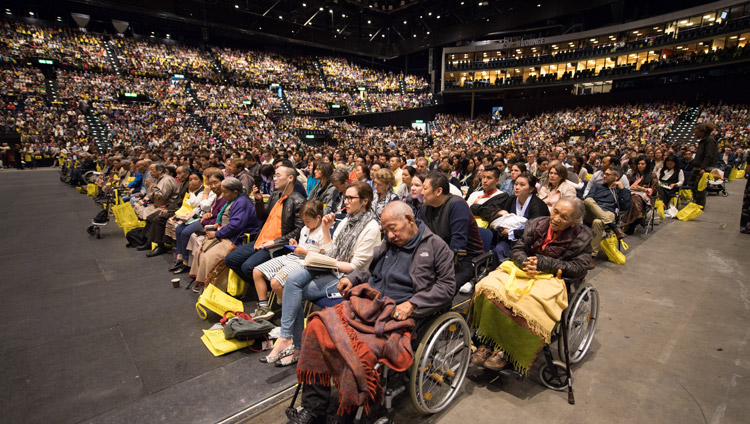 A view of many of the more than 9,000 people attending His Holiness the Dalai Lama’s teaching at the Zurich Hallenstadion in Zurich, Switzerland on September 23, 2018. Photo by Manuel Bauer

Finally, Daniel Aitken, President of Wisdom Books, requested His Holiness to release the paperback edition of ‘The Life of My Teacher: A Biography of Kyabjé Ling Rinpoché’, of which he was the author.

Addressing the Tibetan audience, His Holiness said the following words,
“Wherever Tibetans are, whether born in Tibet or outside, we all have a body of blood, flesh, and bone that is Tibetan. The name Tibetan cannot be obliterated from the world while we still live.”

His Holiness also outlined the development of the Middle Way Approach that he initiated and that the Sikyong has also adopted.

Tomorrow, he will take part in an event in Winterthur organized by the Zurich University of Applied Science, Tibet-Institute Rikon and the Ganden Phodrang Foundation of the Dalai Lama. 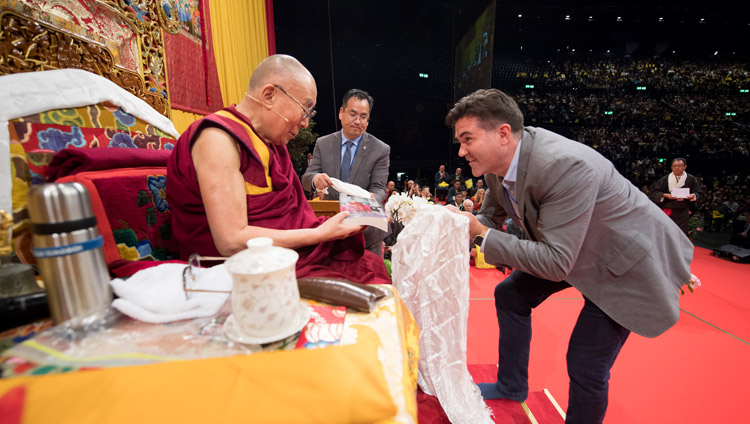 Daniel Aitken, President of Wisdom Books, requesting His Holiness to release the paperback edition of ‘The Life of My Teacher: A Biography of Kyabjé Ling Rinpoché’ at the conclusion of teachings at the Zurich Hallenstadion in Zurich, Switzerland on September 23, 2018. Photo by Manuel Bauer