We Must Think of the Migrants as Brothers and Sisters: His Holiness the Dalai Lama in Italy 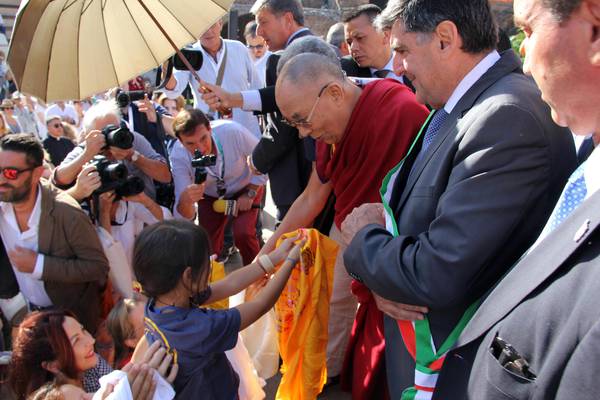 PALERMO, Italy: Upon arrival at Palermo from Messina, His Holiness the Dalai Lama spoke to reporters who inquired about the refugee crisis that the city is currently grappling with. The city of Palermo is the first port of call for many migrants from Africa and the Middle East who undergo dangerous sea journeys to reach the shores of Europe for a brighter future.

Migrants and refugees must “not be discriminated against on the basis of their skin colour or religion”, His Holiness the Dalai Lama told journalists in the city, where he will deliver a talk ‘Joy of Education’ at Teatro Massimo Opera House.

“They are the object of the exercise of our compassion,” His Holiness added.

“From the outset of the crisis we should have thought of migrants as brothers and sisters who are facing huge problems and give them refuge,” he continued.

“We must take them in. The host countries should offer education for the children, while older people should be given technological training so they are able to return, with ongoing support from the countries that took them in,” His Holiness the Dalai Lama said.

The statement comes amidst a growing tirade against migrants from a spurt in nationalistic fervor in Europe where migrants are blamed for social ills and economic misfortunes.

His Holiness the Dalai Lama has earlier expressed support for Germany over its move in welcoming over a million displaced refugees, calling the country’s policy compassionate. His Holiness has also condemned violence in the name of religion and called for logic and analysis in religious faith.