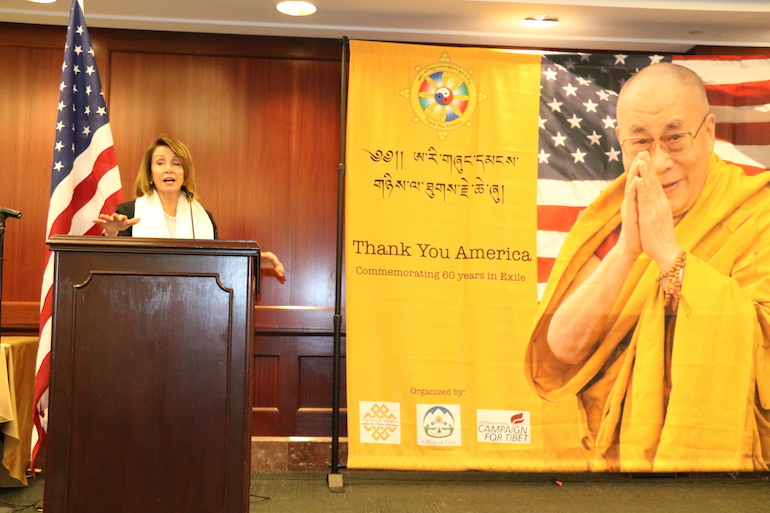 Speaker of the US House of Representatives Hon Nancy Pelosi speaking at the Thank you America event hosted by the Office of Tibet, the International Campaign for Tibet (ICT) and the Capitol Area Tibetan Association. Photo/Lhuboom/RFA

Washington DC: Speaker of the US House of Representatives Hon Nancy Pelosi on Wednesday addressed the Thank you America event hosted by the Office of Tibet, the International Campaign for Tibet (ICT) and the Capitol Area Tibetan Association in Washington DC. The event was a part of the Central Tibetan Administration’s yearlong campaign to express gratitude to the US government and people for steadfastly supporting His Holiness the Dalai Lama and the Tibetan people.

Speaker Pelosi began by urging that the world must address the Tibet issue for if it didn’t, it’d lose all moral authority to speak about human rights anywhere else in the world.

She heaped admiration for the tremendous leadership of President Dr Lobsang Sangay of Central Tibetan Administration and said that the Tibetan spiritual leader, His Holiness the Dalai Lama also took great pride in his leadership.

Here is the full speech of the Speaker Nancy Pelosi’s address:

On behalf of all our colleagues, the House of Senate, Democrats, and Republicans, we think that what’s happening in Tibet is something that we must address and as we say over and over again, unless we speak out bravely about what is happening in Tibet [and we shouldn’t hesitate because of commercial interest with China] and if we don’t, we lose our moral authority to speak about human rights anywhere else in the world. This is an important challenge to the conscience of the world.

Dr Sangay thank you so much for your tremendous leadership, we watched it great admiration. And I know His Holiness takes great pride in your leadership.

Dr Sangay spoke about our Presidents, their interests and hospitality to and with respect to Dalai Lama, I just want to tell one story about President George W Bush. When Congress bestowed the Congressional Gold Medal on His Holiness the Dalai Lama, that was our privilege as the Congress of United States, but it was our honour that President George W Bush came and presented the medal to the Dalai Lama. Not only did he come, Mrs Bush came too. That is such a big honour…

The Reciprocal Access to Tibet Act was a major bipartisan, bicameral accomplishment. When we were in Tibet, Mr McGovern he was in every meeting with every official at every level in Tibet, in Beijing where he bought up the Reciprocal Access to Tibet idea that turned into Tibet Act… It was such a thrill for us that towards the end of the last session, when his bill passed the House under the leadership of Senator Marco Rubio (R-FL), it passed in the Senate, bipartisan, bicameral and signed by President Trump. It was a very major accomplishment. Thank you, Mr McGovern. […]

Matteo Mecacci has been such an important force in inter-parliamentary activities and decades of dedication to this issue with great courage in every way in terms of human rights in China and Tibet. Thank you for your leadership as well.

What was happening in Tibet has been happening in Tibet; now it is happening in Uyghur regions of China and it has to be called out. Million of Uyghurs imprisoned for the same purpose, as they say, “assimilation”. They want to purge all the individuality of the Tibetan culture. We have a real challenge to conscience that is not just about Tibet—as significant as that is—not just about His Holiness the Dalai Lama and his watch. His Holiness was the first person to win the Nobel prize with the mention of protecting the environment in his award and that is something really so special.

When you say ‘Thank you, America,’ we say thank you to His Holiness the Dalai Lama, the people of Tibet, Tibetans in Dharamshala and to the Tibetans in the diaspora, who are working so hard to preserve the culture, the language, the religion, the strength of it all.

All of you who are here understand to carry in your heart the beautiful contribution the Tibetan culture is to the world, to the value that it places on its own culture but also on nature and how going to the roof of the world as we saw the devastating impacts of climate change; that is what His Holiness has been talking about one way or another for a very long time… the values that His Holiness has taught us over the years is so important.

When we gave His Holiness the Gold Medal, I was presented by him this beautiful representation of Tibet which I keep at the entrance of speaker’s office so that everybody that comes in, Chinese official and the rest see this manifestation of Tibet very clearly there. We want everyone who comes to all of our offices to see how proud we are of that association.

We have more to do but in good faith and inspired by His Holiness as beautiful mind, heart, soul and sense of humour, let us be guided.