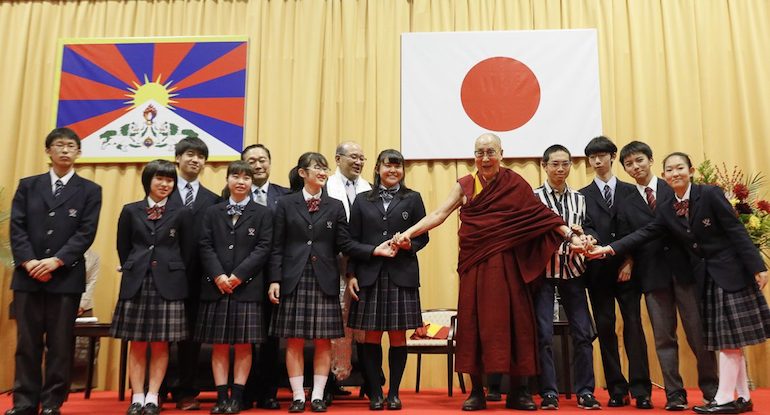 His Holiness the Dalai Lama with a group of students during his talk at Reitaku University in Chiba, Japan on November 19, 2018. Photo/Tenzin Jigme

Dharamshala: His Holiness the Dalai Lama on Monday was presented with an Honorary Doctorate of Literature by the Reitaku University in Kashiwa, Japan.

His Holiness was received by President of the Reitaku University, Mototaka Hiroike and Vice-president Osamu Nakayama. As he stepped onto the stage, His Holiness was greeted with an outburst of warm applause from more than 1700 students and staff in the audience.

In his introductory speech, the President thanked His Holiness for his work to promote warm-heartedness and inner values as the source of human happiness, goals shared by the university. He also acknowledged His Holiness’s efforts to reach an understanding of modern science and Buddhist science.

His Holiness was invited to don the University gown and academic cap and thus attired was presented with an Honorary Doctorate of Literature. As he sat back down to address the gathering, senior members of the University left the stage to take their seats in the front row. His Holiness insisted that Vice-President Nakayama come back to sit with him so he wouldn’t feel alone.

“I always emphasize that we human beings are all the same,” he began. “Buddhist teachings tell us that there are limitless sentient beings throughout the universe and all want happiness not suffering.

“I’d like to begin by acknowledging my respected elder brothers and sisters here, as well as my younger brothers and sisters. It’s a great honour for me to receive this Honorary Doctorate, although I haven’t done much to earn it. I feel refreshed to be faced with so many young people. With elderly people like me, I can’t help wondering who’ll go first me or you, but I’m happy to meet you all.

“I’m simply a human being and every day the news tells us about human beings killing other human beings and innocent children dying of starvation or for want of medical supplies and facilities. We may ask ourselves what’s going wrong since scientists assure us that basic human nature is compassionate. When children are born they receive tremendous affection from their mothers who nurture them with love and attention. We are social animals; we depend on others for our very survival. Kindness and affection bring us together—anger drives us apart. Indeed, scientists tell us that constant anger undermines our immune system and spoils our health.

“Therefore, it’s very sad to see how much suffering in the world is of our own making. Natural disasters are beyond our control, but the gap between rich and poor is a result of human neglect. It’s because too often we think first of ourselves. Modern education is oriented towards material goals with little scope for inner values. When modern education began to emerge about 200 years ago religious institutions ensured a sense of inner values, but as the influence of those institutions has declined we need our education establishments to take responsibility for fostering values like compassion and concern for others.

“Where physical hygiene is commonly encouraged to preserve physical health, we need a sense of emotional hygiene, the means to tackle destructive emotions like anger, jealousy and fear. Buddhist literature is replete with knowledge of how to do this, but this knowledge can be employed in a corrective and academic way. It’s not a matter of faith, but of reason. When the Buddha advised, “As the wise test gold by burning, cutting and rubbing it, so, bhikshus, should you accept my words only after testing them, and not merely out of respect for me,” he was encouraging us to investigate for ourselves.”

His Holiness was speaking in English and his words were then translated by Maria Rinchen into Japanese. After one passage of translation, he laughed as he looked at the expressions on some of the students’ faces and, teasing them about Japanese formality, asked them to smile a bit more. Many of them laughed in return.

“Whoever I meet, I always keep in mind that I am just another human being. It’s important to remember the oneness of humanity—that we are all the same in being human. We create problems for ourselves by paying too much heed to secondary differences of nationality, race and religion. In the 60 years I’ve lived in India I’ve been impressed to see that all the world’s religions live there side by side demonstrating how religious harmony can flourish. 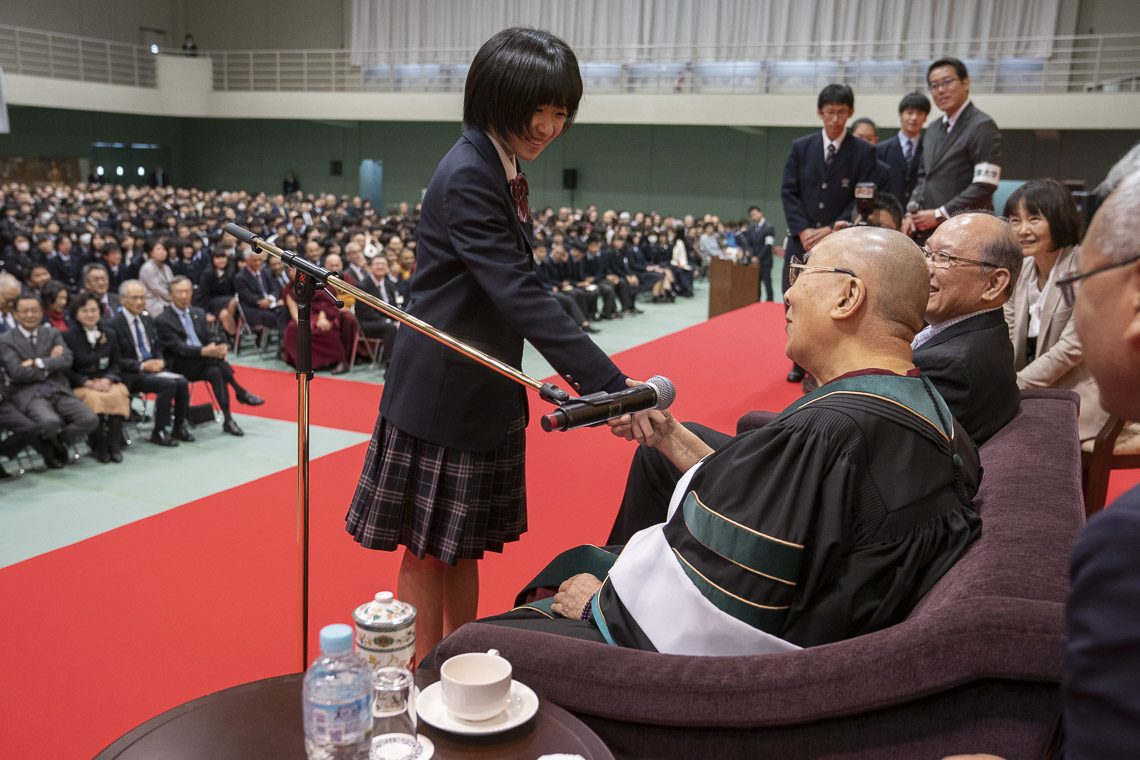 His Holiness the Dalai Lama thanking a young student for her questions during his talk at Reitaku University in Chiba, Japan on November 19, 2018. Photo by Tenzin Choejor

“As a Tibetan I have a duty to work for the Tibetan people, but since we achieved an elected leadership in 2001 I have retired from political responsibility. I speak up whenever I can for the protection of Tibet’s natural environment, which is as crucial to climate change as the North and South Poles making it a Third Pole. Tibet is also the source of Asia’s major rivers.

“However, my main concern is to keep Tibet’s Buddhist knowledge alive. What we preserved in Tibet was a complete presentation of the Buddha’s teachings. Elements of its philosophy, psychology and logic remain relevant today. What’s more, the Tibetan language is presently the medium most suited to accurately communicating these ideas. This is knowledge that we have safeguarded since the 8th century when the Indian master Shantarakshita came from India’s Nalanda University to Tibet. Over the last nearly 40 years we’ve shared some of it in discussions with modern scientists to mutual benefit.

“You young people here belong to the 21st century. I and many of your professors belong to the 20th century and our time has gone. The past is past and can’t be changed, but the shape of the future is in your hands. You who belong to the present century can create a world that will be happier and more peaceful. The last century was a period of immense violence. You Japanese sustained two nuclear attacks during which more than 100,000 were killed instantly—very sad. But in the late 20th century as people became more mature they began express how fed up they were with violence.

“We have a chance to make this a more peaceful era. When conflicts arise they should be settled through dialogue not the use of force. It is my hope that Japan will lead a movement for the elimination of nuclear weapons with the ultimate aim of a demilitarized world. War means killing. Violence leads to counter violence. We need to put an end to combat and the production of weapons and construct a more peaceful world.”

Answering students’ questions, His Holiness told them his favourite Japanese food is sticky rice, but that he doesn’t like raw fish. When faced with suffering and problems he tries to look at them from a wider perspective. What looks insuperable close up can seem more manageable from a distance. He recommended that young people pay more attention to inner values and the means to achieve peace of mind. One of the ways to set the mind at ease is to remember the oneness of humanity.

Asked how it felt to be awarded the Nobel Peace Prize, His Holiness recounted what he told journalists in North America on the day of the announcement. He felt it was recognition of his efforts to promote peace of mind as well as peace in the world. He recalled that when he reached India journalists asked him how he would use the prize money. He explained that he had been so impressed by the positive atmosphere of Baba Amte’s leprosarium that he intended to donate half there; the other half he would give to launching the Foundation for Universal Responsibility in Delhi.

Regarding relations with China, His Holiness recalled, “In the 7th century, during the Tang dynasty, the Tibetan king married a Chinese princess. Relations were close. One of the most revered statues in Lhasa came from the Tang capital of Xi’an. We’ve had good relations, we admire Chinese culture, and at some times we’ve fought. When the Tibetan army reached the walls of Xi’an, the Chinese Emperor had to escape.

“When Chairman Mao wanted to liberate Taiwan and Tibet, Stalin apparently advised that since taking Taiwan would be difficult, he should think of taking Tibet first. Hardliners among Chinese officials have only taken a short-sighted view. We are not seeking independence; we can remain with the People’s Republic of China so long as the benefit is mutual.”

On his way to the President’s house for lunch he planted the sapling of a flowering tree to commemorate his visit. In the afternoon he returned to Tokyo. 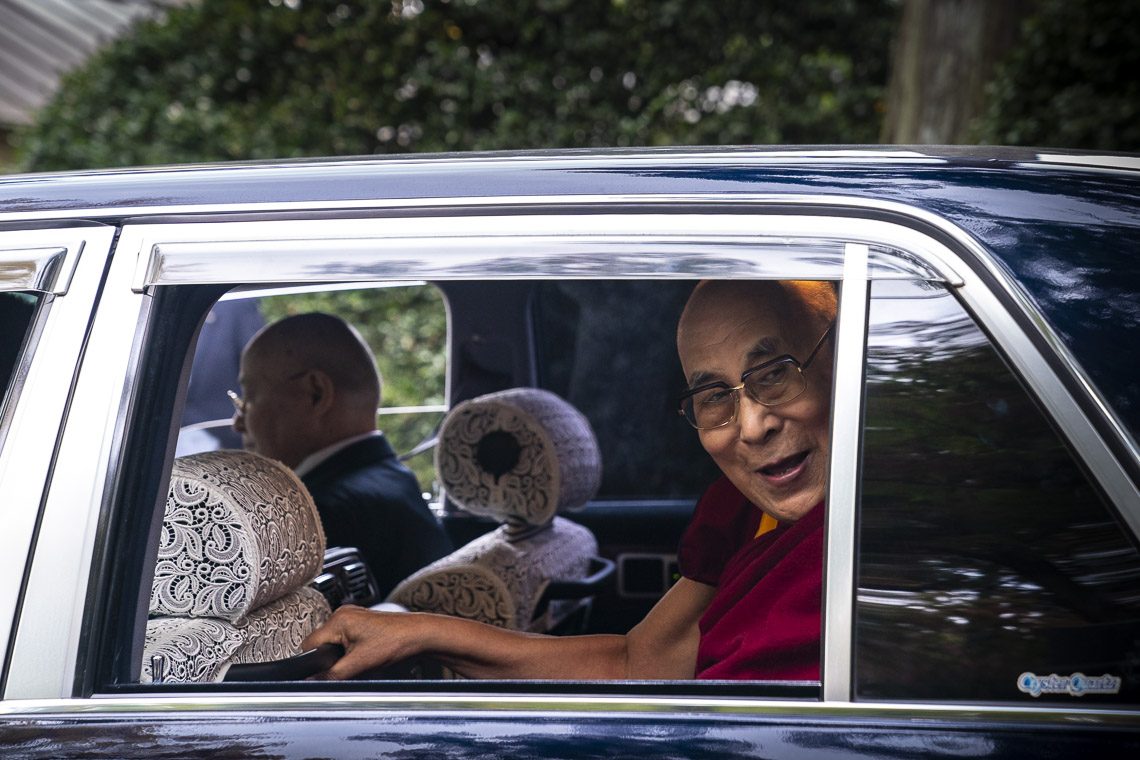 His Holiness the Dalai Lama smiling to well-wishers as he departs Retiaku University in Chiba, Japan on November 19, 2018. Photo by Tenzin Choejor