Recently leaked footage of a crackdown by Chinese security forces in Tibet indicates that the level of repression against Tibetans appears to be much more serious than generally acknowledged by the international community. 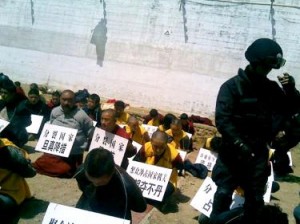 A video posted on the exile Tibetan Web site TibetOnline.tv on Wednesday showed a raid by a Chinese SWAT team comprising about 100 People’s Armed Police (PAP) officers on what is believed to be Unit 2 of Dode Village, near the Sera monastery northeast of Lhasa.

The quality footage, which is believed to have been shot in 2008, displays an unprecedented show of force by Chinese authorities, with SWAT teams, accompanied by numerous dogs and an armored vehicle, assuming attack formation and aiming assault rifles at sleeping villagers. In all, four confused-looking men and one elderly woman are taken away. Each is forced to stare into the camera and provide details to the cameraman, who is presumably a PAP member.

Unlike previous unrest, such as the 1989 riots in Lhasa or the March 2008 incident, during which nervous and sometimes vengeful PAP officers were confronted with an emergency, the troops in the video are not responding to any immediate threat.

As of last evening, the 22–minute video appeared to have been taken offline. It has since emerged on YouTube.

The material follows the release on the citizen journalism Boxun Web site last week of eight photographs showing Tibetan prisoners being paraded by a large contingent of armed police in China’s Sichuan Province, also in 2008 or later.

The two releases have led analysts to conclude that someone in China, perhaps within the security apparatus, is leaking information to show the true scale of repression in Tibet and neighboring areas in China.

Reacting to the video, Dawa Tsering, chairman of the Tibet Religious Foundation of His Holiness the Dalai Lama — the de facto representative of the exiled government in Taiwan — said that the way in which Chinese treat Tibetans showed them to be a conquered and colonized people.

“Any Tibetan with a heart will never forget this humiliation, we will not forget how arrogant the Chinese are and the humiliation we went through,” he said. “We will remember this for generations to come and this memory will constantly remind us of what we should do.”

Former Regional Tibetan Youth Congress Taiwan president Tashi Tsering said he was not surprised by what Chinese police officers did to Tibetans.

“That’s how the Chinese Communist Party has always treated Tibetans,” Tashi said via telephone. “The Chinese always claim they respect human rights, but what they do is different from what they say. Taiwanese should know this and be very careful when dealing with China.”

He called on the international community to launch a probe into human rights violations in Tibet.