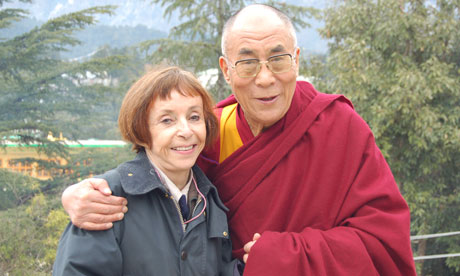 Vanya Kewley with the Dalai Lama, whom she visited regularly/The Guardian

Vanya Kewley, who has died aged 74, was a brave and terrier-like foreign correspondent who specialised in television reports and documentaries that exposed human-rights violations worldwide.

She worked from Chile to Saudi Arabia, via Vietnam, producing early profiles of controversial international leaders such as Colonel Gaddafi (Soldier for Islam) and General Ojukwu (The Man Who Made Biafra). Although she stood just over 5ft, dictators held no terrors for her.

She was beaten and imprisoned in Uganda when her crew were mistaken for mercenaries; clubbed unconscious when living on famine rations among the Ananaya “freedom fighters” in South Sudan; and threatened with death by North Korean soldiers.

The high point of her career came in 1988 when she made a secret journey of more than 4,000 miles across mountainous Tibet. After three years of secret planning with expatriate Tibetans, she entered the region with a guided tourist group, then deserted it. Travelling alone for six weeks, aided by local Tibetan guides, she recorded with a hand-held video camera the first documentary in decades about the isolated region, which had been entirely closed to the outside world from the 1949 invasion by the Chinese Red Army until the end of the Cultural Revolution in 1976.

The result was entitled Tibet: A Case to Answer, and featured interviews with more than 100 monks, nuns and others who described harrowing experiences of torture, famine, enforced abortions and arbitrary imprisonment. Broadcast as part of the Channel 4 Dispatches series, it included statistics from the exile organisation, the Tibetan Bureau of Information, which alleged that by the early 1980s more than a million Tibetans had met their deaths in prison and labour camps, or had died by execution, torture, starvation or suicide.

The film quickly won acclaim both in Britain and in the 17 other countries where it was aired. But it also attracted controversy. The subjects of Vanya Kewley’s interviews appeared without disguise and many feared for their safety. The film-maker herself said that she had tried to persuade her Tibetan interviewees to mask their identities to prevent reprisals, but that they had refused, insisting that getting the story out was worth any retribution.

In 1991 Vanya Kewley returned secretly to Tibet, smuggling herself in this time across the Himalayas hidden beneath the floorboards of a van to make a second documentary, entitled Voices from Tibet. She sought out those she had interviewed for the first film and found that some had indeed suffered official punishment: two nuns had been badly tortured for speaking to her and when she visited them in prison, she found them “completely unrecognisable”.

Vanya Kewley won her first award in 1977 at the annual Montreux Festival for a documentary on contraventions of human rights in South Korea. The next year she was the recipient of the BBC director general’s Award for Special Services to Television.

Highlights in a long list of other programmes were Rosie’s Story (1980) which investigated the problem of baby battering in Britain; Paradise Lost (1976), which uncovered the widespread use of torture in Paraguay under Alfredo Stroessner; and The Year of the Prophet (1979), which documented the resurgence of Islam in Saudi Arabia and calculated political and economic implications of this for the West.

Born in Calcutta on November 8 1937 to a French mother and a British diplomat father, who transmitted to her his enthusiasm for studying comparative Asian religions and Sanskrit, Vanya Kewley was educated, mostly in Roman Catholic convent schools, in India, France and Switzerland. She began to read Philosophy and History at the Sorbonne but left before a year was up and moved to London to train as a registered nurse, working in the casualty department at Charing Cross Hospital.

She soon found herself drawn towards journalism and began writing in her spare time for local London newspapers. She then joined Granada’s World in Action programme in Manchester in 1965, working first as a newsreader and later as a producer-director.

Despite her long career in television, Vanya Kewley never forgot her roots in nursing. In the early 1990s she returned to Charing Cross Hospital in London to do a refresher course before flying out to work variously for the Red Cross in Bosnia and for the United Nations High Commission for Refugees in Rwanda during the 1994 genocide.

Her humanitarian instincts also surfaced in other ways. At different times she adopted and sponsored the education in India of two Tibetan-born girls, Pema Choezam and Choezam Tsering, one of whom she had spotted working in a carpet factory at the age of seven. In Rwanda she adopted and sponsored a boy, Jean-Paul Habineza, whom she had seen knocked down by a lorry in the streets of Kigali. All are now in their thirties and thriving.

In 2000 she married Michael Lambert, a professor of Herpetology, but he died of bone cancer in 2004. For the last 19 years of her life, Vanya Kewley herself battled a progressive wasting illness. Despite this she continued to travel once a year to India and Dharamsala – home in exile of the Dalai Lama, who was the subject of her 1975 film, The Lama King. The two became great friends through the film and met for a final time on Boxing Day last year.