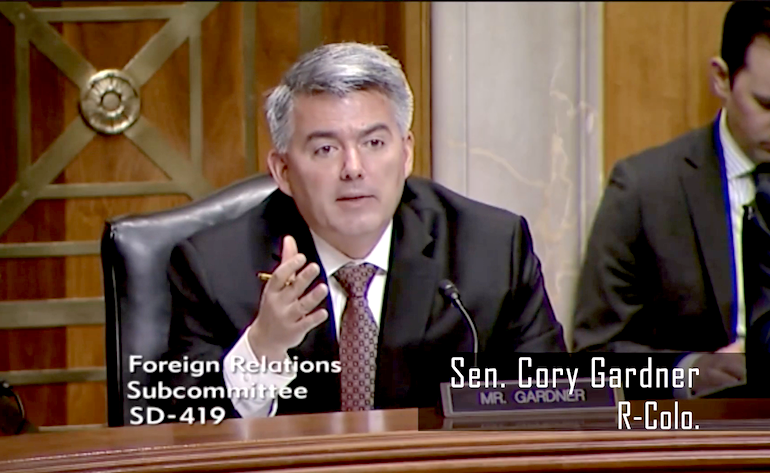 The US Congress will never recognize China’s choice of the next Dalai Lama, says Senator Cory Gardner at the hearing of the Senate Foreign Relations Subcommittee on East Asia, the Pacific and International Cybersecurity Policy, 9 April 2019.

“Let me be very clear: The United States Congress will never recognize a Dalai Lama that is selected by the Chinese,” Senator Cory Gardner addressed a hearing of the US Senate Foreign Relations Subcommittee on East Asia, the Pacific, and International Cybersecurity Policy. The subcommittee is a key Congressional body that oversees US policy in Asia. Sen Gardner is the subcommittee chairman.

In a further snub to Chinese spurious claims, the US Congress declared that it will only follow the instructions laid out by His Holiness the Dalai Lama in regard to the future of his reincarnation.

“His Holiness [The Dalai Lama] has laid out [his] succession. Only then will the US follow that succession.”

Bhuchung K. Tsering, vice president of International Campaign for Tibet (ICT) who testified at the hearing on the situation in Tibet and its impact on the Indo-Pacific region said China’s plans to control the Dalai Lama’s reincarnation will not be accepted by Tibetan Buddhists inside or outside Tibet.

In 2011, His Holiness the 14th Dalai Lama issued an edict on the future of his reincarnation as well as the history of the tulku tradition in Tibetan Buddhism.

In the statement, His Holiness said, “in the absence of clear guidelines, should the concerned public express a strong wish for the Dalai Lamas to continue, there is an obvious risk of vested political interests misusing the reincarnation system to fulfil their own political agenda. Therefore, while I remain physically and mentally fit, it seems important to me that we draw up clear guidelines to recognise the next Dalai Lama, so that there is no room for doubt or deception.”

“If it is decided that the reincarnation of the Dalai Lama should continue and there is a need for the Fifteenth Dalai Lama to be recognized, responsibility for doing so will primarily rest on the concerned officers of the Dalai Lama’s Gaden Phodrang Trust.”

His Holiness further admonished that apart from reincarnation recognized through such legitimate methods, no recognition or acceptance should be given to a candidate chosen for political ends by anyone, “including those in the People’s Republic of China.”

The complete edict can be read here.

Recently in an interview with NHK Japan on his reincarnation, His Holiness explained that as far back as 1969 he had made it clear that the choice of whether another Dalai Lama would be recognised rested with the Tibetan people.

“That choice precedes any decision about how a successor may be chosen.”