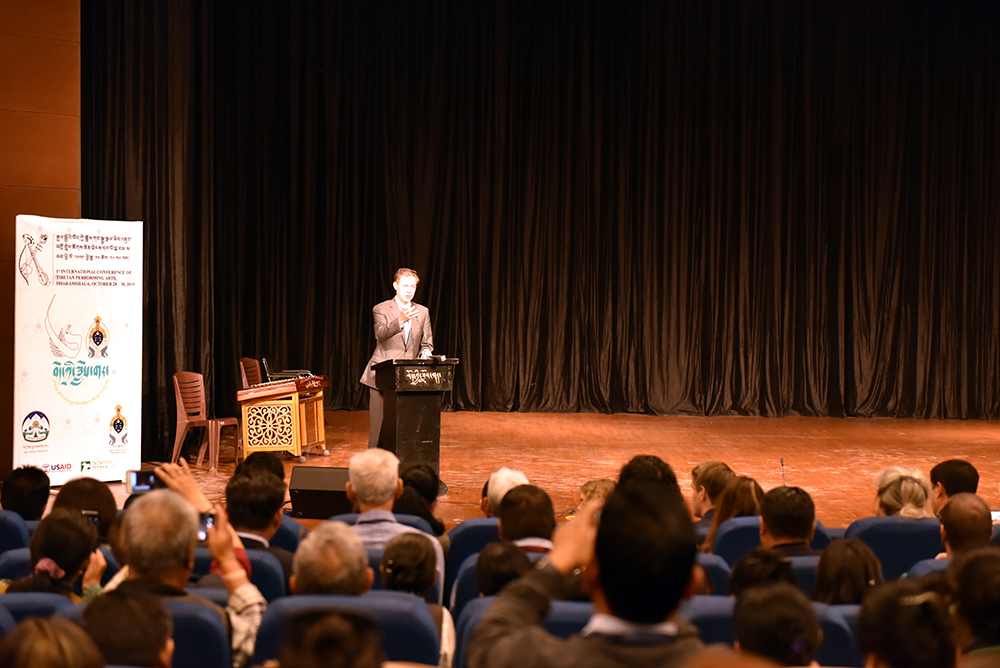 Dharamshala: In the most extraordinary show of support for the rich and revived culture, art and religion of Tibet, the US Ambassador at large for International Religious Freedom, His Excellency Samuel D Brownback, graced the First-ever International conference of Tibetan Performing Arts here in Dharamshala at the special invitation of the President of Central Tibetan Administration (CTA), Dr Lobsang Sangay.

The presence of the head of US state department’s Office of International Religious Freedom marks the highest-level endorsement of the US government in the ongoing efforts towards the revitalisation of Tibetan culture, art and faith in the diaspora.

His Excellency Ambassador Brownback made the strenuous journey from Washington DC to the exile seat of Central Tibetan Administration in north India to deliver a message of hope and inspiration to Tibetans inside Tibet; at the same time, to tell China in clear, definite terms that the US Government prioritises the protection of the inalienable right of religious freedom and condemns its violations at all levels anywhere in the world.

With the presence of the Ambassador Brownback and more than 26 scholars-Tibetan and non Tibetan-from 10 countries invited, this year’s gathering marks the first-ever and the highest-profile convening on Tibetan art and culture in the exile history of Tibet.

Chief guest His Excellency Sam Brownback began his speech extolling the President Dr Lobsang Sangay and his Cabinet (Tib: Kashag) for providing outstanding leadership to Tibetan people and deemed it his honour to join the celebrations and meeting His Holiness the Dalai Lama earlier this morning.

The Religious Freedom Ambassador addressed some of the most critical issues concerning human rights and religious freedom inside Tibet and especially on the reincarnation of the Dalai Lama, on which regard the Ambassador distinctly asserted the sole authority of His Holiness the 14th Dalai Lama and the Tibetan Buddhist system.

“Beijing has long interfered in the succession process of the spiritual leaders in Tibet, most egregiously when 1995 the Chinese government abducted the 11th Panchen Lama when he was 6 years old along with his parents. We call on the PRC government to release immediately the Tibetan recognised Panchen Lama Gedun Choekyi Nyima or share the truth about his faith with the world.”

“We stand with the people of Tibet as they seek to preserve their time-honoured traditions including their right to venerate religious leaders of their choosing. Earlier this month at the 3rd Special General meeting in Dharamshala, Tibetans from far and wide underscored the right of the Dalai Lama and other Tibetan leaders to identify and recognise a successor to His Holiness and rejected Chinese authorities to interfere in this process.”

“Let me be clear! The United States shares that view,” Ambassador Brownback said.

In conclusion, the International Religious Freedom Ambassador made three key appeals to the People’s Republic of China: First, it called on the PRC government to release immediately the Tibetan recognised Panchen Lama Gedun Choekyi Nyima or share the truth about his faith with the world.

Second, it urged the PRC government to change its policies in Tibetan areas that have created this tension. To respect and preserve the distinct religious, linguistic and cultural identity of the Tibetan people and permit Tibetans to express their grievances freely, publicly, peacefully and without fear of retribution.

Lastly, it strongly urged the PRC government to protect the Internationally recognised right to religious freedom to all individuals and respect the human rights of members of all religious group and accordance with China’s Human rights commitments.

On supporting dialogue between the envoys of His Holiness the Dalai Lama and the PRC, Amb. Brownback expressed that the US Government is committed to raising Tibetan issue with Chinese government counterparts at multiple levels and U.S government officials including the Vice President as well as officials from U.S consulate in Chengdu and US Embassy in Beijing continues efforts to establish conditions that laid to direct and meaningful dialogue between PRC authorities and His Holiness or his representatives without preconditions that leads to a sustainable settlement. 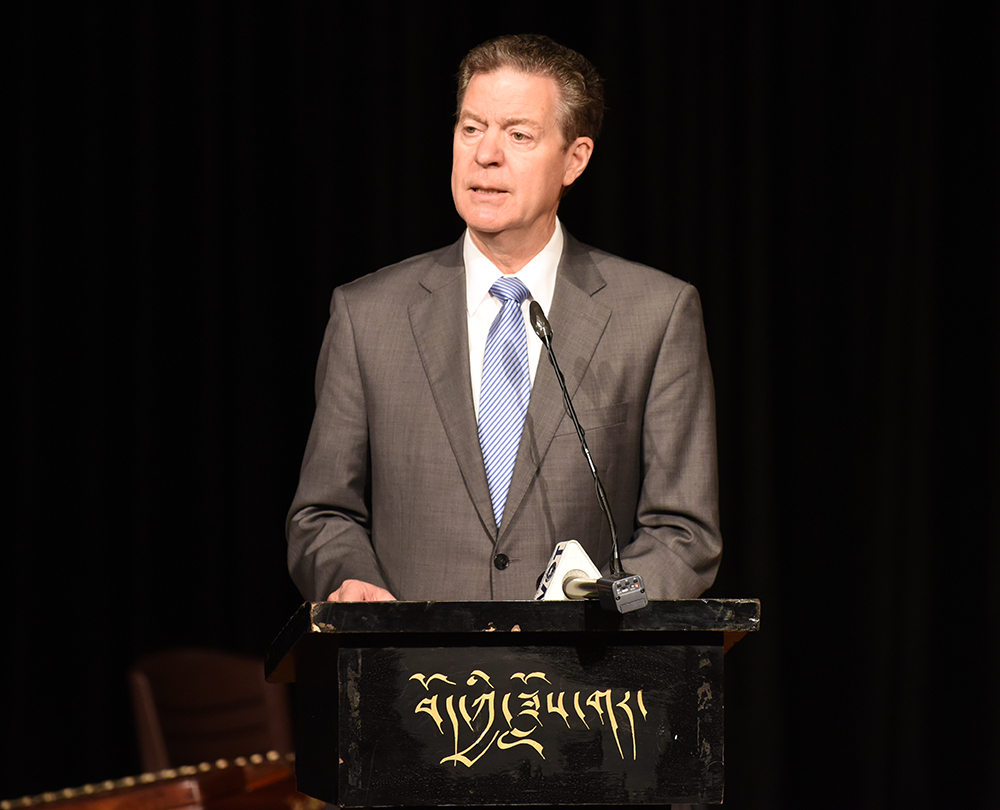 “In closing, I commend to you the powerful image of the Snowlion, symbol of Tibet found throughout Tibetan visual and performing arts, paintings and dance joyful, fearless, strong and free. Thank you for your time, thank you TIPA for hosting me and God bless you,” Ambassador said, concluding his remarks.

The President Dr Lobsang Sangay, in his address, thanked profusely the Ambassador Sam Brownback who, despite great challenges, committed to be here at the CTA headquarters to honour the 60th anniversary of TIPA and the first International Conference on Tibetan performing arts.

“I want to thank Ambassador Brownback for being here because this journey took a bit of a complicated route. Initially, the karmic connection was not that clear but the Ambassador worked so hard. He pushed very hard within the State Department and the White House to clear his speech. So in the last three days, everything fell into place, which means, Ambassador, you are bound to be here. That’s the karmic connection. We want to deeply thank Ambassador for making all the efforts to specifically come to the Dharamshala to be with us.”

On behalf of the six million Tibetans inside Tibet and worldwide, President Sangay thanked Ambassador Brownback for his decisive and strong moral leadership in advocating for religious freedom for Tibetan people, Uyghurs and people of faith worldwide.

“Ambassador has been in the forefront advocating for religious freedom for Tibetan people, Uyghurs and for people of faith all around the world. Under his leadership, he organised two ministerial-level conferences on religious freedom and more than 90 countries participated. Both the times, his office made sure that the Tibetan delegation is part of the ministerial delegation. The representative of Office of Tibet in Washington DC and staff members were invited both the times. A former Tibetan political prisoner gave personal testimonies in both the ministerial level conferences.”

“Salute to you for your courage and moral standing,” the President said.

In the same vein, President Sangay acknowledged and thanked the leadership of the US government in advocating for human rights of people in China, particularly the Tibetan people. He referred to the recent speech delivered by Vice President Mike Pence, describing it as “the strongest speech ever by any US leaders on human rights in China”. “Secretary of the State Mike Pompeo has also mentioned Tibetan and human rights in India.”

Speaking on the political significance of the 60th anniversary of the Tibetan premier institute of arts and culture, the President said the design of Chinese occupation of Tibet, from early 1959, was to destroy the source and foundation of Tibetan identity.

But from rubbles of complete destruction, the Tibetan Buddhism, culture, language, art and medicine was revived and the major hubs were rebuilt in exile in the last 60 years under the leadership of His Holiness the Dalai Lama and the support of friends around the world. Even inside Tibet, Tibetan Buddhism is fully preserved and revived in personal and social capacities.

Hence, President Sangay hailed the marking of the TIPA Institute’s 60th anniversary as a success story of the revival of Tibetan civilisation and the fulfilment of the vision of His Holiness the Dalai Lama.

He quoted the 10th Panchen Lama’s 70,000-Character Petition—the first major criticism of Chinese policy in Tibet—which recorded the destruction of 98 per cent of monasteries in the Tibet Autonomous Region and the Tibetan areas incorporated into the Chinese provinces and the mass starvation and imprisonment in Tibet.

The Petition, he said, clearly proved two important facts: first, that the occupation of Tibet was not a peaceful liberation, it was extremely destructive; Secondly, it debunked the Chinese people’s attribution of the destruction of Tibetan monasteries and nunneries as the aftermath of cultural revolution. The report submitted in 1962 clearly showed that the destruction of the Tibetan religion was more or less completed before the Cultural Revolution which began 1965 onwards.

“The situation in Tibet is grave and serious. Hence we really appreciate the international participants and encourage you to share your scholarship and knowledge about how rich Tibetan culture was, is and should remain so,” said President Sangay.

In that context, he once again thanked Ambassador Brownback for honouring the Tibetan Institute of Performing Arts with his esteemed presence, adding that his visit marks one of the highest-level official visit led by US government to CTA.

“Your presence sends a message that religious freedom is universal, human right is inherent and democracy is inevitable. By your presence, you are sending a message to Beijing. I think they will hear it loud and clear that the Ambassador and the US government are with the Tibetan people. For this, we are very grateful.”

“Every day, six million Tibetans inside Tibet are longing to hear a good news, a positive news. A person of your standing—former Governor, former Senator, a leader in the Republican Party— to be here, you’re sending a powerful and right message to Tibetans inside Tibet that there is hope and we will struggle with you till basic freedom is restored and faith is granted as a universal freedom. Thank you very much!” Dr Sangay said as he ended his speech.

Co-organiser of the event, the Director Ngawang Yonten, Tibetan Institute of Performing Arts (TIPA) delivered a welcome address on the occasion and thanked the President Dr Sangay for providing his guidance and visionary leadership in convening the historic International Conference on Tibetan Performing Arts.

“It is an honour for me and the Tibetan Institute of Performing Arts to welcome His Excellency Samuel Brownback, US Ambassador at large for International Religious Freedom to the institute,” Director Yonten said.

“The Conference is very important as it is a part of our institute’s 60th-anniversary celebration. The proceedings and outcomes of the conference shall be very informative for our artists and also other research fellows who are interested in Tibetan performing arts and music. I also wish all the participants a wonderful time in Dharamshala.”

The inaugural event concluded with a warm vote of thanks from the Secretary and Director of Tibet Policy Institute and a co-organiser, Tsewang Gyalpo Arya.

Secretary Arya thanked His Excellency Ambassador Brownback for his esteemed presence, following which the members in auditorium rose to give a standing ovation to the Ambassador as a mark of respect and appreciation. 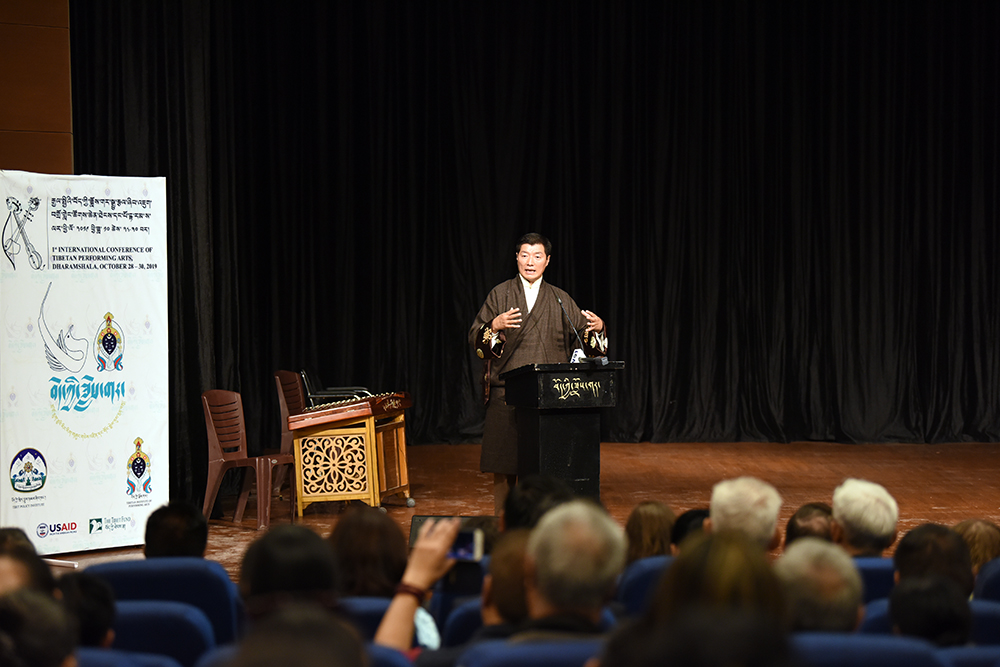 The President of Central Tibetan Administration, Dr Lobsang Sangay speaking at the inaugural ceremony of the First-ever International conference of Tibetan Performing Arts and the 60th anniversary of TIPA, 28 October 2019. 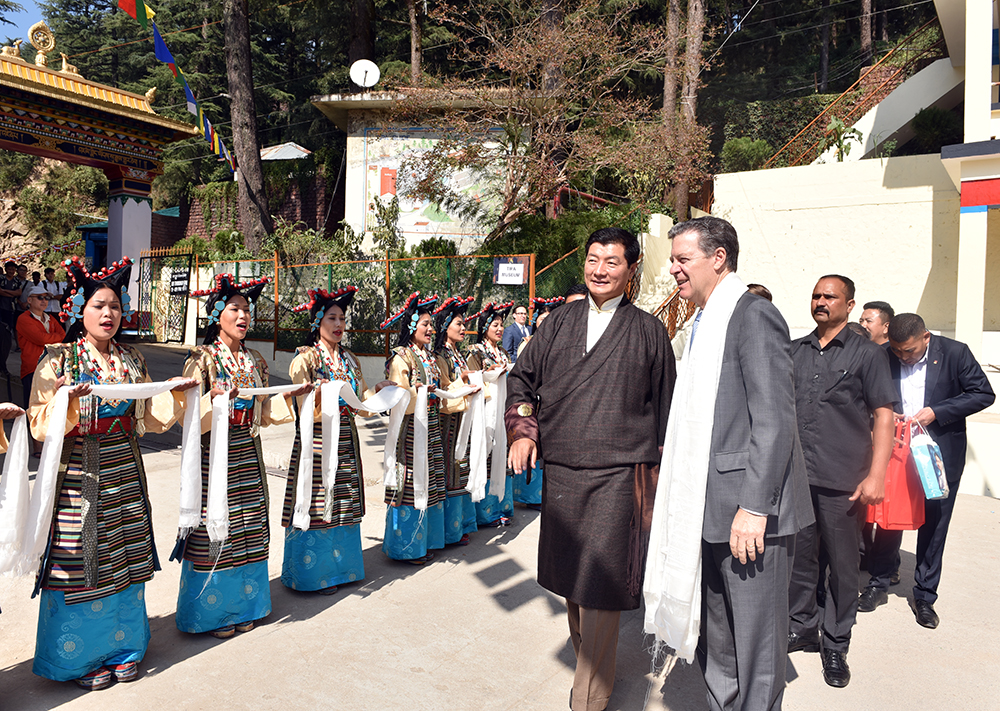 Flanked by the President Dr Sangay, US Ambassador for International Religious Freedom arrives at the inauguration of the first-ever International conference of Tibetan Performing Arts and the 60th anniversary of TIPA, 28 October 2019. 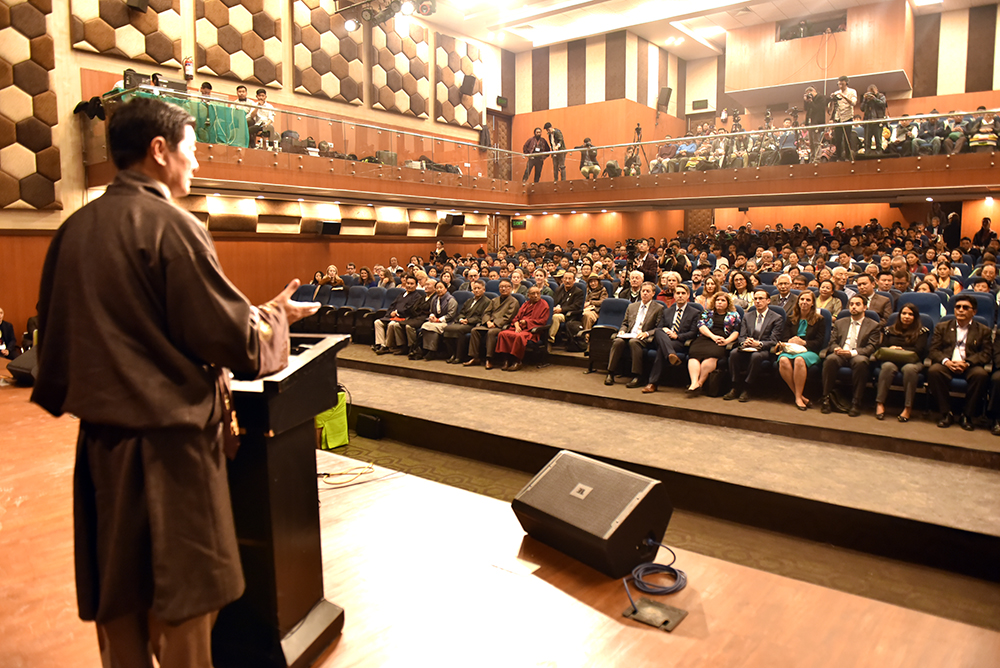 Members of Kashag, scholars from more than 10 countries participating in the First-ever International conference of Tibetan Performing Arts and the 60th anniversary of TIPA, 28 October 2019. 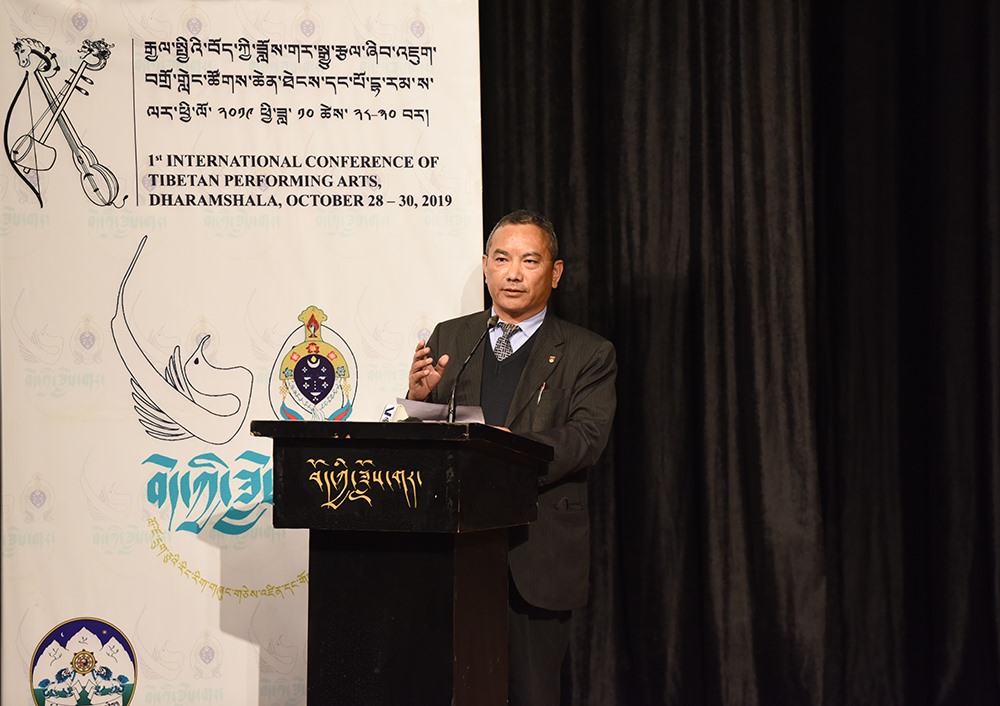 Secretary and Director, Tsewang Gyalpo Arya, of Tibet Policy Institute delivers the vote of thanks at the inaugural ceremony of the first-ever International conference of Tibetan Performing Arts and the 60th anniversary of TIPA, 28 October 2019. 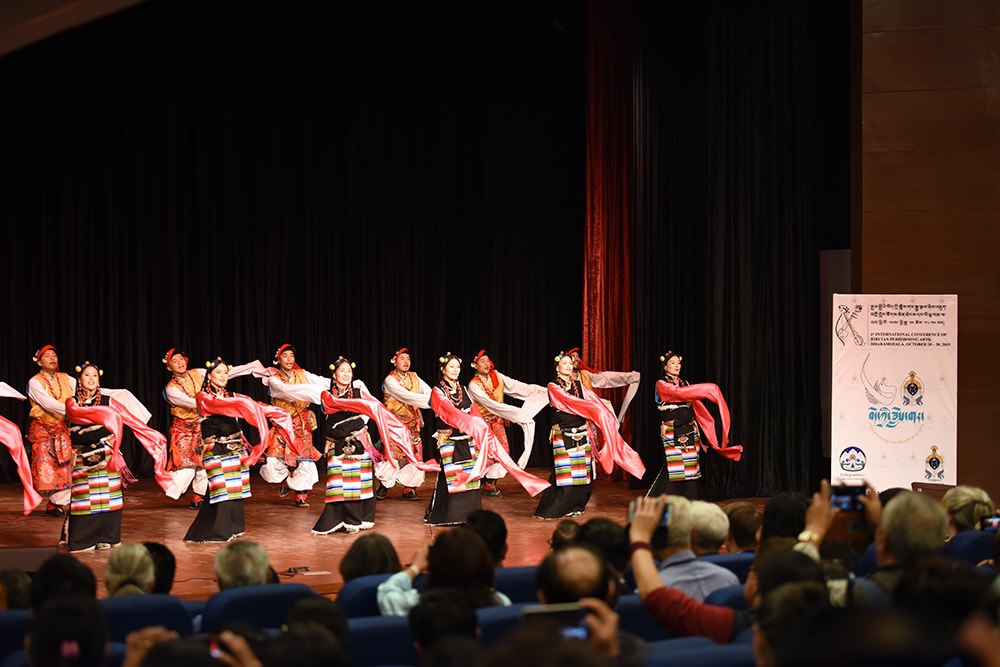 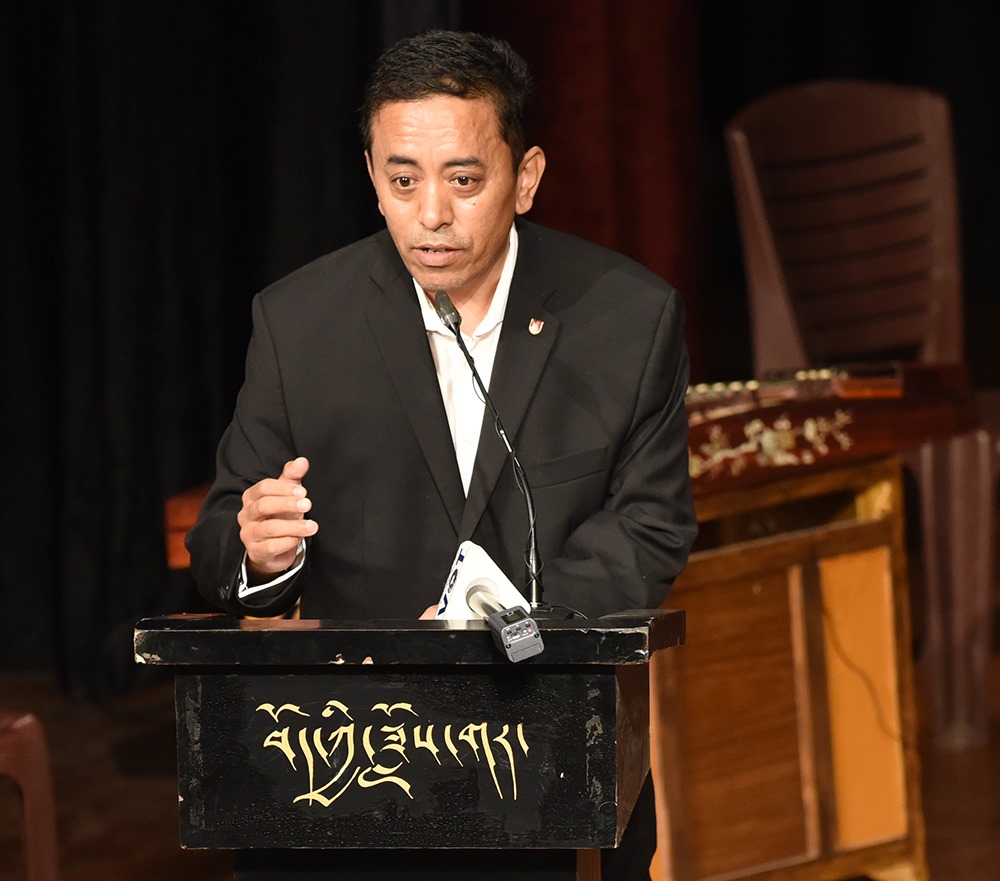 Director of Tibetan Institute of Performing Arts, Ngawang Yonten, delivers the welcome address at the inaugural ceremony of the first-ever International conference of Tibetan Performing Arts and the 60th anniversary of TIPA, 28 October 2019.