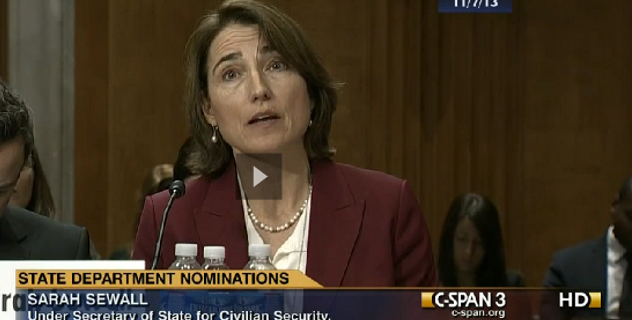 WASHINGTON, DC – February 20, 2014: Dr. Sarah Sewall was appointed today as the U.S. Under Secretary for Civilian Security, Democracy, and Human Rights. Her role also includes serving as the Special Coordinator for Tibetan issues.

Dr. Sewall previously served as a Senior Lecturer in Public Policy at Harvard University’s John F. Kennedy School of Government. She served as a Deputy Assistant Secretary for Peacekeeping and Humanitarian Assistance under President Clinton and as President Obama’s national security and foreign policy transition team. Dr. Sewall is a former head of the Carr Center for Human Rights Policy at Harvard University, a graduate of Harvard and Oxford universities, and a Rhodes Scholar.

Among the responsibilities of the Special Coordinator for Tibetan Issues as outlined in the Tibet Policy Act of 2002, Under Secretary Sewall will work to promote dialogue between His Holiness the Dalai Lama or his representatives and the government of the People’s Republic of China, as well as coordinate United States government policies, programs and projects related to Tibet.