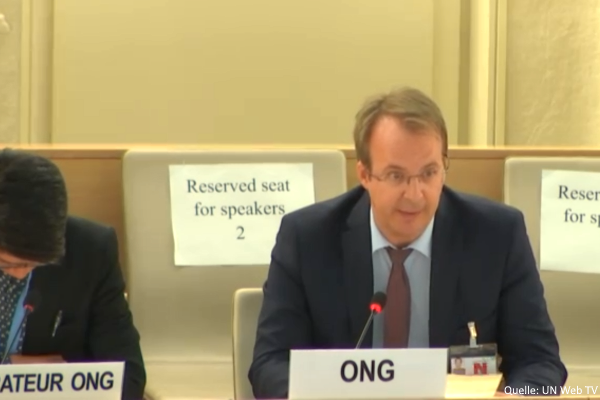 Kai Mueller speaks about Tibet on behalf of the Helsinki Foundation for Human Rights.

In a statement delivered on behalf of the Helsinki Foundation for Human Rights at the ongoing 42nd Regular Session of the UN Human Rights Council in Geneva on 11 September, Kai Mueller drew the Council’s attention to China’s ongoing widespread practice of arbitrary detention and enforced disappearance.

He said: “In the People’s Republic of China, Tibetans are regularly subjected to enforced disappearance. Just recently, news of the disappearance and imprisonment of three monks, Lobsang Thapke, Lobsang Dorjee and Thubpa emerged from the Ngaba area, which has been subject to a crackdown by the Chinese government since the wave of self-immolations began there in 2009. The latter two monks are former political prisoners. No information about their whereabouts is available.”

“For many Tibetans, Choekyi Nyima’s disappearance has come to symbolise the Chinese government’s efforts to interfere with and undermine Tibetan Buddhist culture. His enforced disappearance also constitutes a grave violation of international human rights standards.”

“We urge the Working Group on Enforced and Involuntary Disappearance and other relevant special procedures to continue to express concern and request for information about the disappeared Tibetans, in particular the 11th Panchen Lama, Gedhun Choekyi Nyima.” Read the full statement here.

On this year’s International Day of Disappeared, 27 international rights groups issued a joint statement demanding China to end its state-led arbitrary detentions, imprisonments and enforced disappearances in all its forms. It also pressed upon the United Nations to step up efforts to ensure access by independent human rights experts to all places of detention in China, in particular in Tibetan and Uyghur areas.