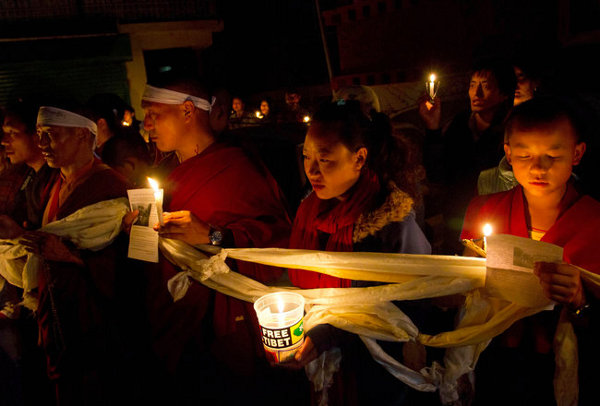 GENEVA — The top human rights official of the United Nations took China to task on Friday over the suppression of Tibetans’ rights that she said had driven them to “desperate forms of protest,” referring to about 60 self-immolations by Tibetans protesting Chinese rule that have been reported since March 2011, including seven since mid-October.

The official, Navi Pillay, the high commissioner for human rights, said in a statement that she was disturbed by reports of detentions, disappearances and the excessive use of force against peaceful demonstrators, as well as curbs on Tibetans’ cultural rights. Ms. Pillay said “serious concerns” had been raised over the claims of torture and ill-treatment of detainees and about the standards of their trials.

Ms. Pillay said she had had “several exchanges” with the Chinese government on the issue, and her rare public criticism of China’s conduct on human rights appeared to reflect a measure of frustration.

“We felt the time had come to talk publicly about that,” a spokesman for Ms. Pillay, Rupert Colville, said Friday in Geneva. Self-immolations are evidence of how serious the situation in Tibet has become, Mr. Colville said, and “we don’t see any visible signs of progress.”

In the statement, Ms. Pillay said, “More needs to be done to protect human rights and prevent violations,” urging China to release Tibetans who had been detained merely for exercising fundamental rights like freedom of expression, association and religion. “Social stability in Tibet will never be achieved through heavy security measures and suppression of human rights,” she said.

As examples of that suppression, Ms. Pillay cited the case of a 17-year-old girl who was reported to have been severely beaten and sentenced to three years in prison for distributing fliers that called for freedom for Tibet and the return of the Dalai Lama. She said others had been sentenced to jail terms of four to seven years for writing essays, making films or circulating outside China photographs of events in Tibet.

Ms. Pillay said she recognized the “intense sense of frustration and despair” that had driven Tibetans to such extreme actions, but she appealed to them to seek other ways of expressing their feelings and urged China to allow them to express their feelings “without fear of retribution.”

She said that China had pledged to step up cooperation with the United Nations on human rights, but she said there were 12 outstanding requests to visit China by United Nations special investigators on various human rights-related issues and called on China to facilitate access.