Trending This Week on Social Media: His Holiness the Dalai Lama on a Four-Nation Europe Tour 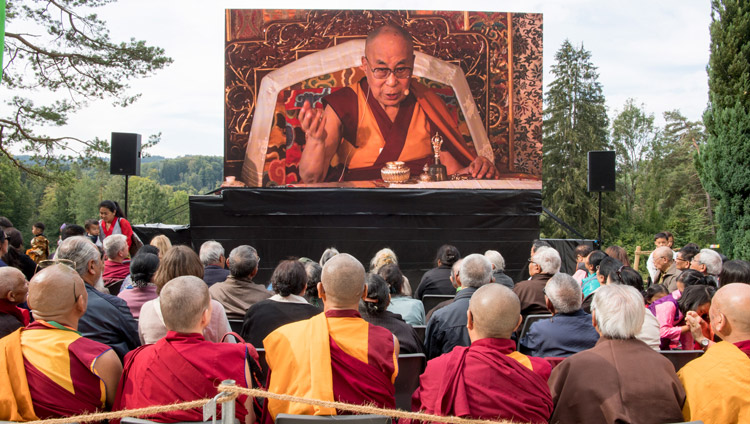 Members of attendees listening to His Holiness the Dalai Lama’s speech on a big screen outside during the 50th anniversary of Tibet Institute Rikon, Switzerland, on 21 September 2018. Photo / Manuel Bauer

His Holiness the great 14th Dalai Lama is currently in Switzerland on the fourth leg of four-nation Europe tour after touring Sweden, Netherland and Germany. This visit marks His Holiness’ second visit to Europe after Latvia visit in June this year. Likewise, netizens across the globe were glued on to “Dalai Lama” official Facebook page for the live stream of His Holiness’ public engagement.

On the invitation of IM Individuell Människohjälp, His Holiness kicked off his first leg of the tour where he attended the public talk on ‘Art of Happiness and Peace’ in front of the 12000-packed venue in Malmo Live auditorium, Sweden. At the gathering, he said we are all the same despite differences in skin colour, race, and nationalities. “ We have a responsibility to solve each other problems by coming together as brothers and sisters of this planet earth,” His Holiness continued.

On his second leg of the tour, His Holiness participated in panel discussions on Robotics and Tele-presence and Sickness, Aging and dying at the Nieuwe Kerk in Amsterdam, Netherland. When asked about how technology and compassion could be a help to people around the world, His Holiness answered machines are very important but machines don’t control machines. Human beings control them, not only by our physical but mind and emotions.  During the second discussion on Sickness, Aging and Dying, His Holiness said we all love life, however, death comes at the end. We tend to fear death, but through mind training, we can develop confidence in the next life.

Following day, His Holiness shared a stage with his old-time friend Richard Gere, the Chairman of ICT in celebration of the 30th Anniversary of International Campaign for Tibet, at the Ahoy convention centre in Rotterdam, Netherland.

Addressing the gathering, His Holiness said our struggle is not just political. The knowledge Tibetans have kept alive is originated from Nalanda tradition in India. Furthermore, he said ‘I retired from political responsibility in 2001, however, preserving the Nalanda tradition and passing the knowledge to fellow human beings is my main concern’.

On his third leg of the tour, His Holiness attended the symposium on Non-violence organised by Tibet Initiative Deutschland and Gandhen Phodrang Foundation at Darmstadt, Germany. His Holiness admired the spirit of the European Union.  “Violence arises when we divide people into ‘us’ and ‘them’, but in the case of Europeans, you all belong to one community. Since the EU was set up there have been decades of peace in Europe,” His Holiness said.

On his final leg of the tour, His Holiness graced the 50th anniversary of Tibet Institute Rikon in Switzerland. At the event, His Holiness said, “Fifty years seems like a long time in the context of our lives in exile.” It was a Red Cross who invited 1000 Tibetans to resettle in Switzerland and were the largest Tibetans living outside India. He also reminded early days in exile, where Tibetans not only think about their own livelihoods rather wanted to keep our culture and religion alive. With the help of Indian government, Buxa camp started with 1500 monks in the capacity of 300.

Today, His Holiness will give a teaching on Nagarjuna’s The Precious Garland of the Middle Way (uma rinchen trengwa), Kamalshila’s The Middling Stages of Meditation (gomrim barpa) & Gyalsey Thokme Sangpo’s Thirty-Seven Practices of a Bodhisattva’s Way of Life (laklen sodunma) in the morning organized by the Tibet Institute Rikon and the Tibetan Community of Switzerland & Liechtenstein at Zurich Hallenstadion.

Glimpses of netizens’reactions on His Holiness’ public engagements on his four-nation Europe tour: 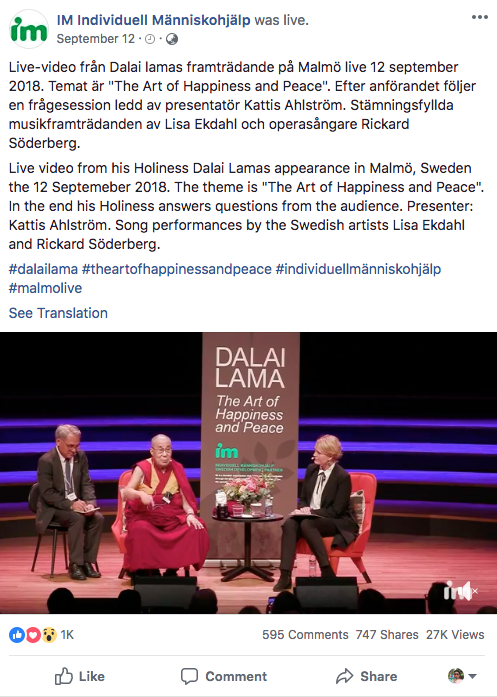 A Facebook user @MariaKempe writes: “Thanking you Dalai Lama for making us understand we are all human beings carried by love and compassion. Thank you from IM Malawi, IM Zimbabwe and IM Sothern Africa.” Photo / Screengrab / @MariaKempe / Facebook 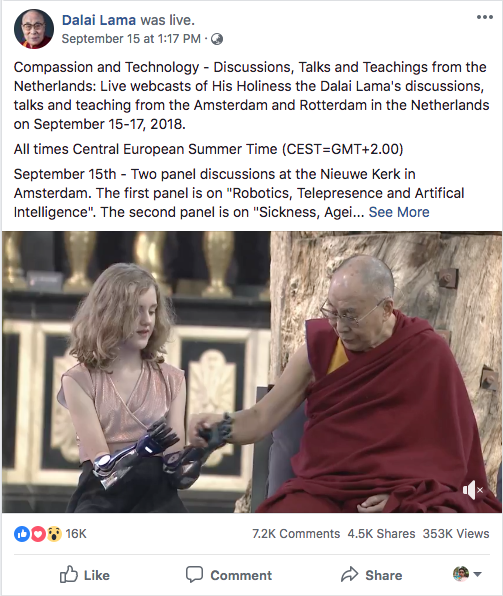 Live stream of His Holiness the Dalai Lama’s discussion on Compassion and Technology in Amsterdam, Netherland. Photo / Screengrab / @DalaiLama / Facebook

A Facebook user @ChunjurTshering writes: “Very wonderful dialogues. It is always a joy to hear such wisdom from him (His Holiness). May the institution of H.H. the Dalai Lama live forever. May all sentient beings be blessed. Tashi Delek.” Photo / Screengrab / @ChunjurTshering / Facebook

A Facebook user @JoKynoch writes: Ï’d love if His Holiness lived forever. His presence amongst us on this planet is a vital balance and such a blessing.” Photo / Screengrab / @JoKynoch / Facebook 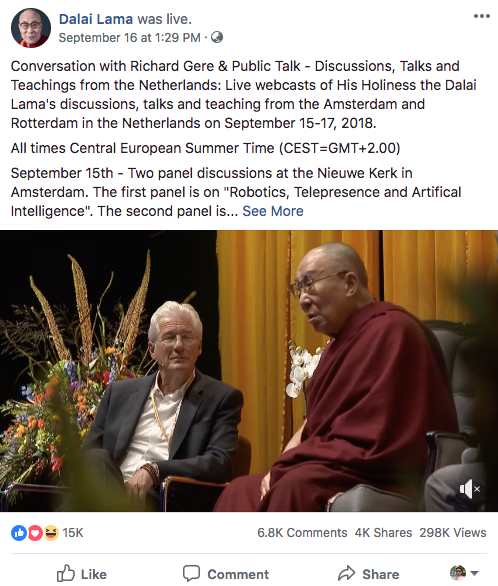 Live stream of His Holiness the Dalai Lama in conversation with Richard Gere, the chairman of ICT and public talk the Ahoy convention centre in Rotterdam, Netherland, 16 September 2018. Photo / Screengrab / @DalaiLama / Facebook

A Facebook user @MerryAura writes: “Thank you, Richard Gere, for raising the issue of Tibet and supporting Tibet and Tibetan cause. No words to thank you. Love you for being so kind and it’s beautiful…”Photo / Screengrab / @MerryAura / Facebook 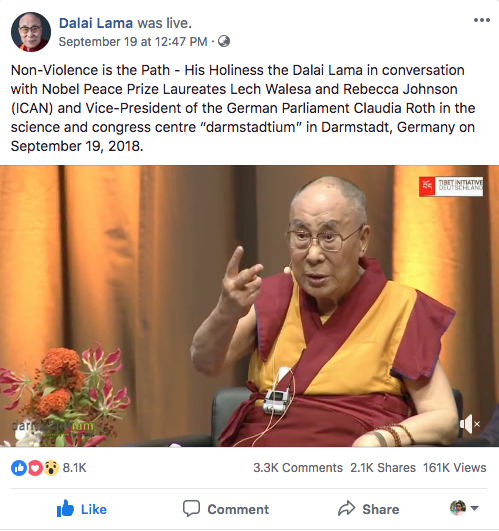 Live stream of His Holiness the Dalai Lama on Non-Violence is the path with fellow noble laureates at Darmstadtium Congress hall in Darmstadt, Germany, 19 September 2018. Photo / Screengrab / @DalaiLama / Facebook

A Facebook user @DeniseBlazy writes: “Always crying when I see and listen to His Holiness… He inspires me so much.” Photo / Screengrab / @DeniseBlazy / Facebook 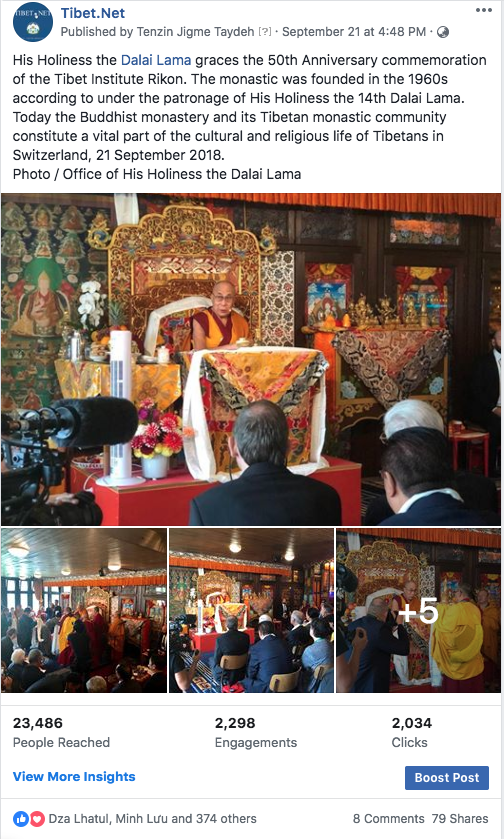