At the meeting, His Holiness advised the 13th HP Chief Minister to be open-minded while carrying out his political duties. His Holiness also highlighted on ancient Indian traditional knowledge and its contemporary relevance. Himachal Pradesh CM was advised to take a leading role in promoting Indian traditional knowledge through education system. Watch the full message in video footage shared by office of His Holiness the Dalai Lama here. 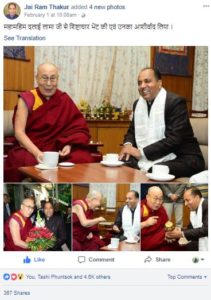 Netizens comments on His Holiness meeting with Chief Minister