Dharamshala: CTA Covid-19 Emergency Taskforce Chair Palden Dhondup, also the Secretary of Health Department, updated the progress of the mass vaccination drive across Tibetan settlements in India and Nepal on Thursday. From 6-8 June, Sikyong Penpa Tsering presided over a series of virtual meetings with Settlement Officers of 41 Tibetan settlements, reviewing the status of mass vaccination drive across these settlements.

Since the COVID-19 vaccination drive took off in India, 13429 Tibetans in India have received the recommended two doses of Covid 19 vaccine procured through respective state government centers as per the data received from the settlements. This includes frontline workers and Tibetans above the age of 44 years.  Central Tibetan administration through the settlement offices and Tibetan health centers have been actively facilitating the community in availing the vaccines.  As of last Thursday, 26451 Tibetans have received their first dose of the COVID-19 vaccine which also includes those above 18 years of age who received their first dose of the COVID-19 vaccine. With the acute shortage of vaccines being reported across India, especially for those between the age group of 18-44, the Central Tibetan administration continues to reach out to various stakeholders involved and mobilize resources to ensure vaccination of the remaining population against COVID-19.

Highlighting the importance of collective effort in the vaccination drive, Chair Palden Dhondup extended his gratitude to the numerous monastic organizations, NGOs, private individuals who have sponsored the vaccination drive in their respective regions, schools, and monasteries. 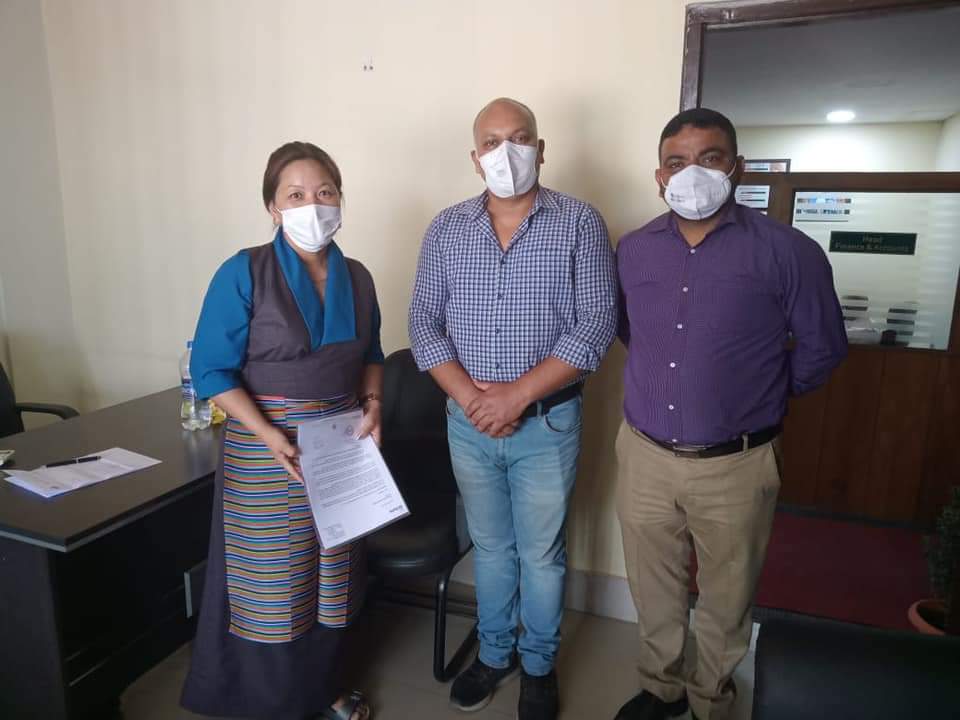 The Dzongsar Khyentse Chokyi Lodro Institute and Siddhartha’s Intent (India) have sponsored free vaccination camps for all the Tibetan residents, schools, and monasteries in Bir and Chauntra. The Executive secretary of Bir primary health center of the Tibetan health centre in Bir reached out to the Fortis hospital to coordinate the procurement of the vaccines for the free camp. Similarly, the monastic organizations in Hunsur have funded the vaccination of their respective monks.

Chair Palden also mentioned the donation announced by Sera Jey Thangsa Gomo Tulku Rinpoche amounting to Rs 113 lakhs to the Health Department. He noted that the donation received will be diligently and effectively used as desired by Rinpoche, who has requested to allot 50% of the funding to local hospitals across various Tibetan settlements while the remaining amount is to be employed for procuring PPEs and other resources by the CTA. 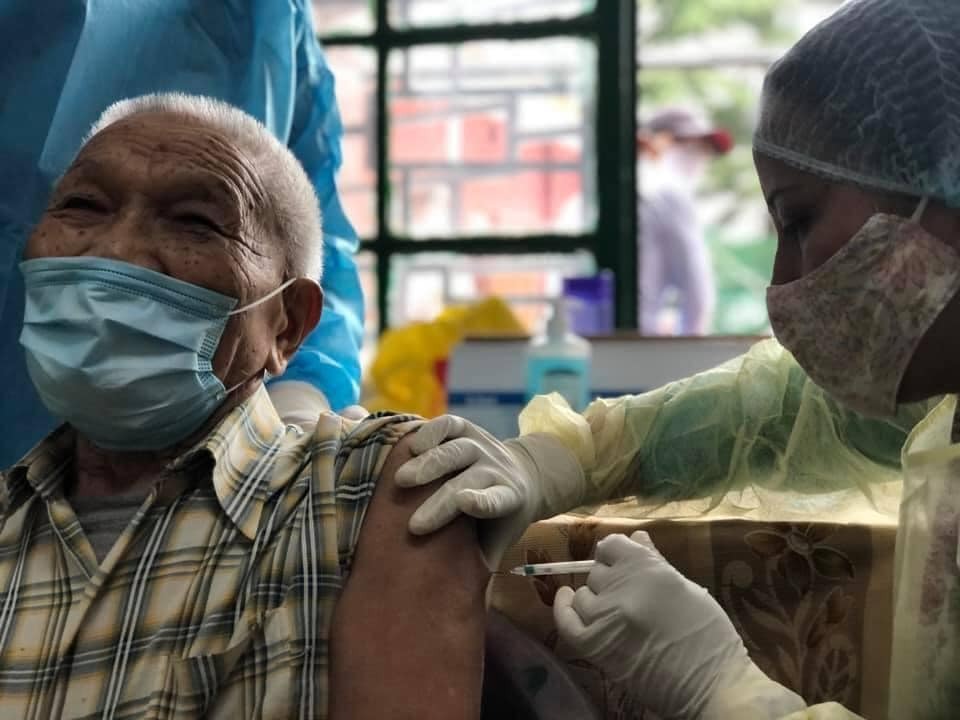 In Dharamsala, through the collaborative efforts of the Department of Health, Delek hospital, and Settlement Office were able to procure 100 vaccines for those in the special category- aged above 45, lactating women, teachers- from the CMO.

Delek hospital is committed to vaccinating around 8000 non-vaccinated people, as proposed in the previous task force meeting. The drive is currently underway, with full immunisation coverage expected in a few months.

Due to the state government’s provision of free vaccines, the majority of those above the age of 60 have received full vaccination against COVID-19 except for those who couldn’t get the vaccine due to medical or personal reasons. Those between the age group of 45-59 in the Tibetan settlements across India have also received their first dose of the COVID-19 vaccine. From far northeastern settlements of Tenzinghang Miao, Tezu, Shillong, Darjeeling, etc to Bhandara, Odisha in Central, Paonta, Dehradun, Bir, and others across northern and southern India, CTA’s Settlement Offices and healthcare workers have been actively engaged. From procurement of vaccines from the local government centers to coordinating data collection, helping with registration and administration of the vaccine, the Tibetan frontline workers have been dedicating all available resources and assistance to ensure full vaccine coverage for the Tibetan population across India. 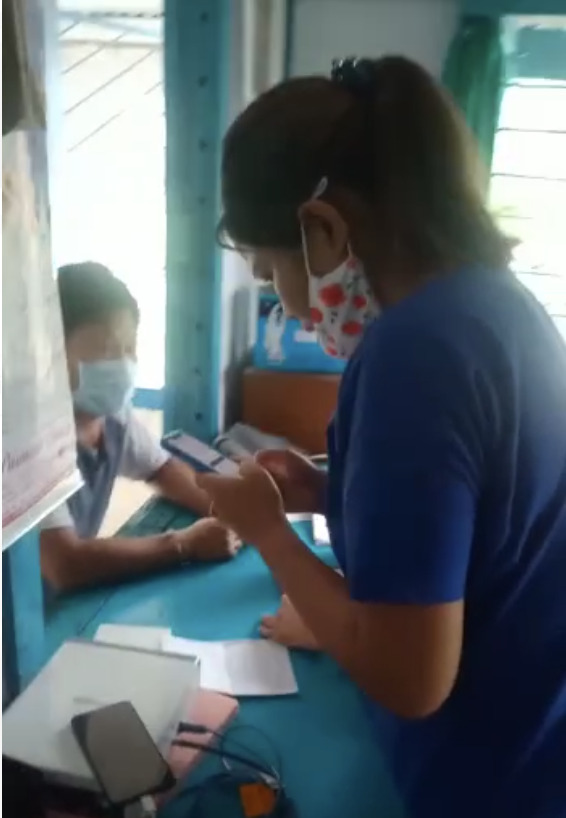 The vaccination drive at Ladakh-Leh and Jangthang Area by the Tibetan Primary Health Center Ladakh in coordination with the UT government has administered 2597 Tibetans and 840 Locals with the first dose and the second dose to 1283 Tibetans and 166 Locals in Leh and Jangthang area. Despite the COVID-19 vaccine shortage among the age group of 18-44 in India, the Tibetan primary health centre staff in Ladakh has been successful in mass vaccination of the first dose of vaccine to 799 people in the age group.

Under the purview of the South-zone Chief Representative Office, Bylakuppe-based Sera Mey and Sera Jey monasteries have sponsored the vaccination of Tibetan college students in Bangalore and Mysore under the vaccine rollout from Apollo hospital. 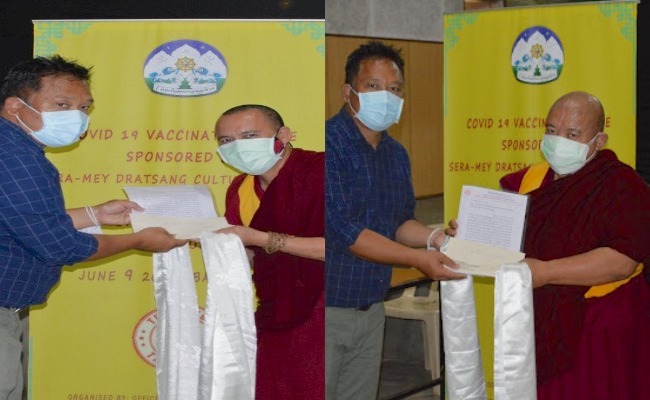 335 people in the 18-44 have received the first dose and four people above age 45 totalling 339 people on 9 June at the Tibetan Youth Hostel. In addition, Dalai Lama Institute for Higher Education students and Men Tsee Khang staff bring the total number to 577 people who received the first dose. The initiative is a testament to the successful facilitation by the Chief Representative Office, TCV staff, volunteers and nurses, Dalai Lama College staff, and Regional Tibetan Youth Congress.

Under the generous funding of Sera Mey and facilitation by the Settlement Officer, 56 students in Mysore and 30 students in Mangalore received their first dose.

A total of 5439 Tibetans aged 18-44 of Lugsam and Dekyi Larsoe Tibetan settlements in Bylakuppe received their first dose of the COVID-19 vaccine, as reported by the respective settlement offices. Namdroling, Tashi Lhunpo, and the respective monasteries sponsored the vaccination, in addition to the funding from the Lugsam Co-operative Society.

Meanwhile, the entire settlement in Mainpat received both doses of the Covid vaccine except for 45 people who refused to vaccinate. Those between the 18-44 age group have received the 1st dose. Similarly, Sambhota staff at Paonta over the age of 18 have been vaccinated. 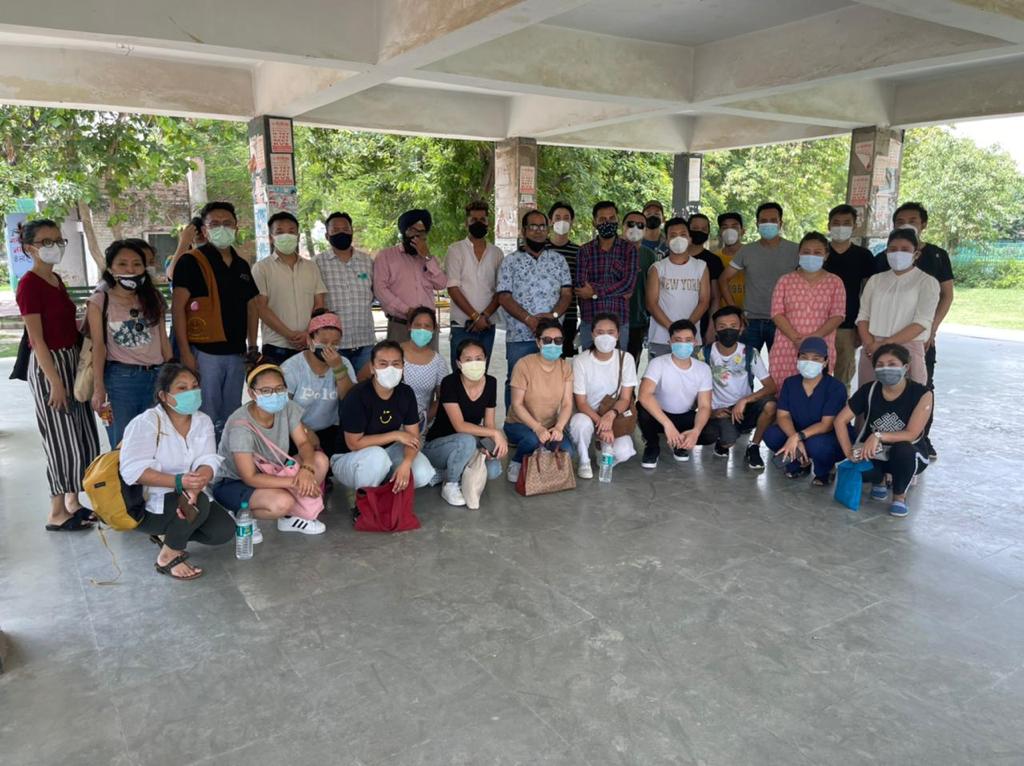 Delhi Settlement Office and branch health clinic in coordination with local Tibetan supporter, Vikas Dagar has vaccinated 110 stranded Tibetan students and residents at Palwal regional hospital and Gurdwara in Haryana with most of the beneficiaries being students.

In Dehradun, Kyabgon Sakya Gongma Trichen Rinpoche has graciously sponsored the first dose of the Covid-19 vaccine for all the Tibetans in the region. 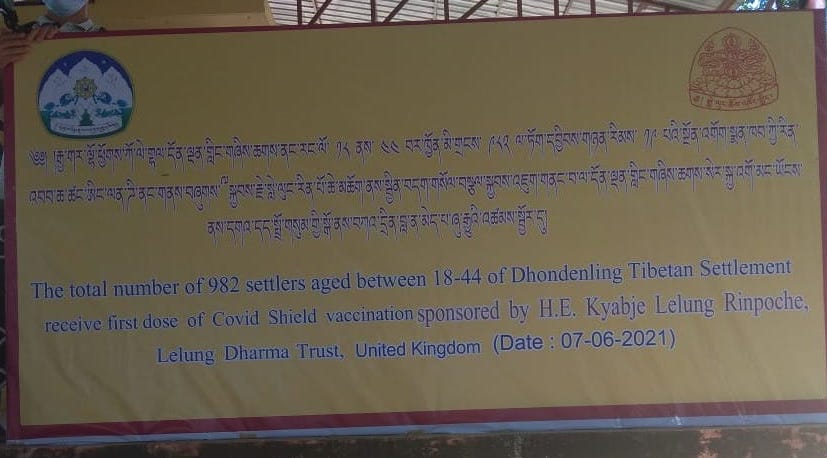 As for Tibetans in Odisha, the vaccination cost is funded by the Rigon Thupten Mindroling Monastery.

The vaccination drive in Nepal has been lagging in comparison to the progress in India. In order to step up the vaccination process, Settlement Officers, local task force and hospital Directors have been directed to leverage the available resources, seek assistance from local authorities, monastic organizations, NGOs and others to vaccinate as many Tibetans as feasible.

In this regard, Sikyong has appealed to the Governments of India and Japan and the US for assistance and accordingly, the vaccination drive is expected to progress soon. 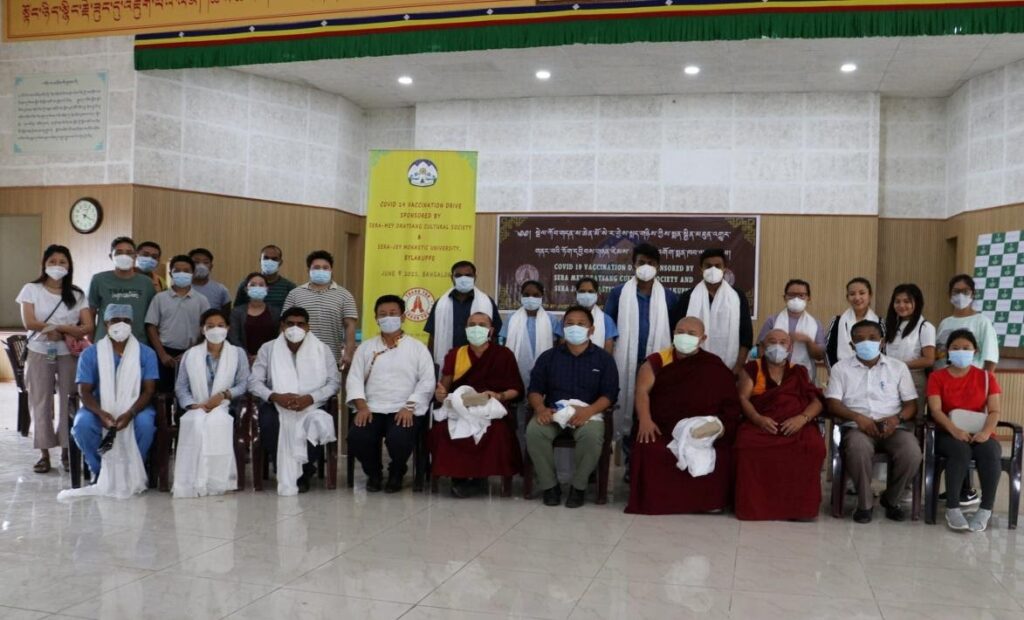 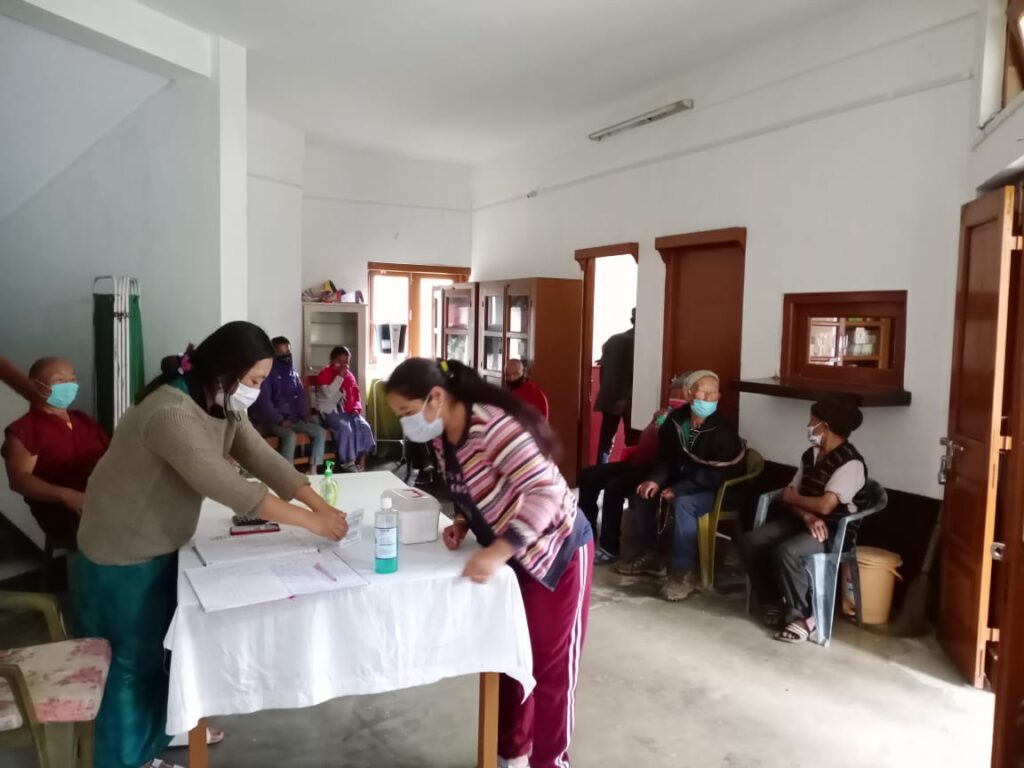 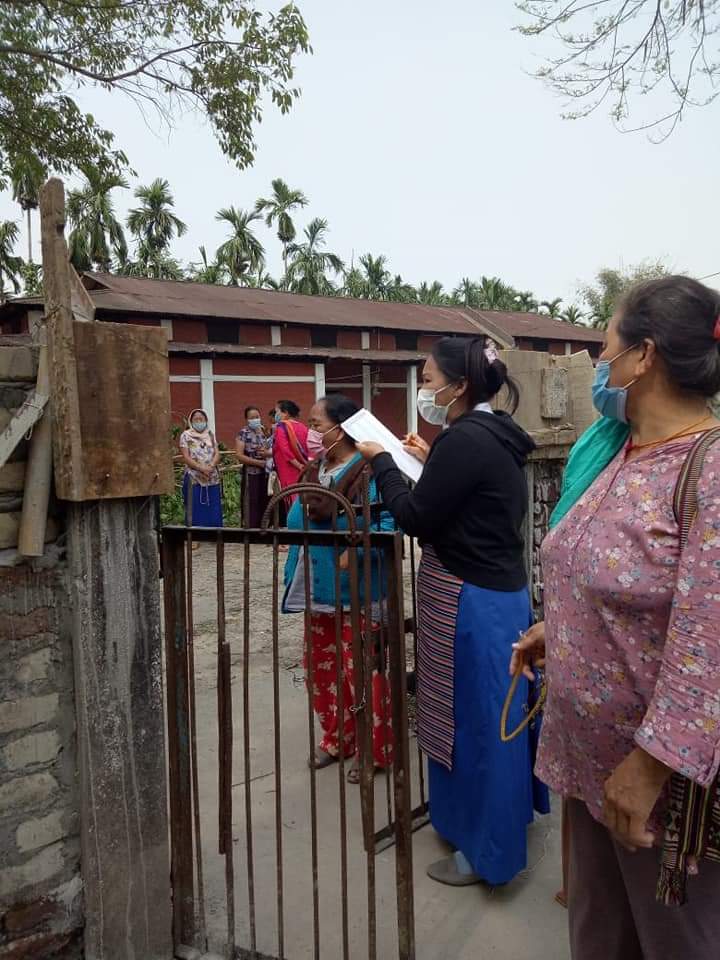