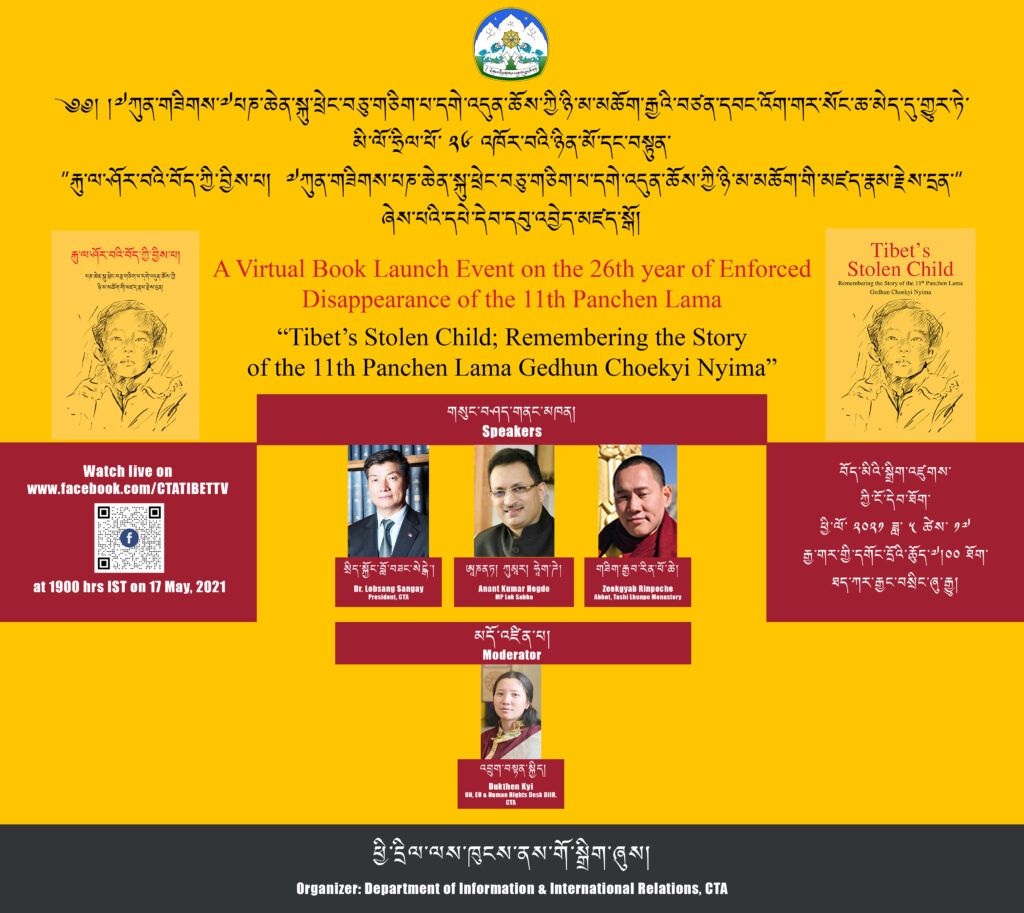 Banner of the virtual book launch event on the 26th anniversary of Panchen Gedhun Choekyi Nyima’s enforced disappearance on May 17 (Live broadcast via Tibet TV Facebook).

Dharamshala: This coming Monday, 17 May, marks the 26th year since Tibet’s 11th Panchen Lama, Gedhun Choekyi Nyima was abducted by the Chinese government. The Department of Information and International Relations, Central Tibetan Administration will be hosting a virtual book launch event “Tibet’s Stolen Child: Remembering the Story of the 11th Panchen Lama Gedhun Choekyi Nyima”. The program will start at 7 PM IST and will be broadcast live on Tibet TV Facebook page.

On 14 May 1995, His Holiness the Great 14th Dalai Lama publicly recognised the six-year-old as the reincarnation of the previous Panchen Lama. Three days later the young Panchen Lama, his family and Chadrel Rinpoche, who was heading the Search Committee to find the reincarnated Panchen Lama, were placed under detention. The Chinese authorities also arrested and sentenced a number of Tibetans who were involved in the search for the Panchen Lama. Since then, for the last 26 years, the Chinese government has turned a deaf ear to the numerous calls from the international community including, the UN, foreign governments, to release him and his family, instead, it continued to detain and isolate the 11th Panchen Lama Gedhun Choekyi Nyima from the rest of the world.

The speakers for the event are honorable Sikyong Dr Lobsang Sangay, the President of the Central Tibetan Administration, Honorable Mr Anant Kumar Hegde, Member of Parliament Lok Sabha (BJP) and the former Union Minister of State for Uttara Kannada constituency, and Zeekgyab Rinpoche, the Abbot of the Tashi Lhunpo Monastery, Bylakuppe. Dukthen Kyi of CTA’s Human Rights Desk will moderate the event.

This event was initially scheduled to take place in person at the Tashi Lhunpo Monastery, South India, in collaboration with the Monastery. Unfortunately, due to the ongoing COVID-19 spike in India and the lockdown regulations imposed by the Indian government to curb further spread of the pandemic, the event had to be commemorated virtually.

As a part of Central Tibetan Administration’s ongoing initiatives, Sikyong Dr Lobsang Sangay will launch the book titled “Tibet’s Stolen Child: Remembering the Story of the 11th Panchen Lama Gedhun Choekyi Nyima”, in the hope that the Panchen Lama and his family are freed in the future and our homage and prayers, as an Institution and community, for their wellbeing, are answered.