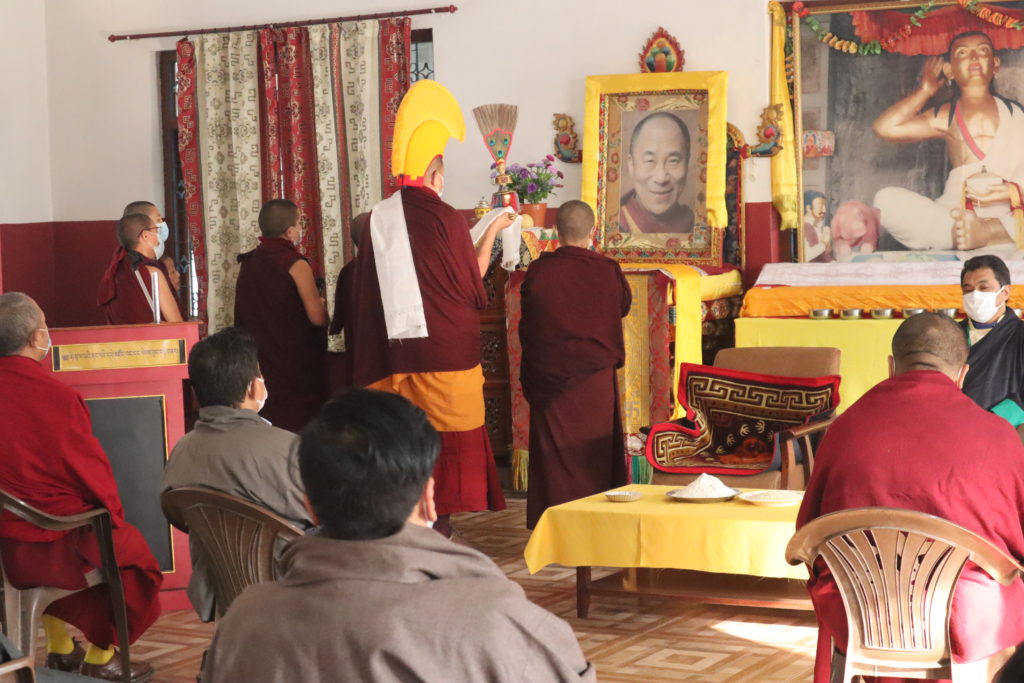 Khen Rinpoche and the nuns of Thukche Choeling nunnery offering mandala to the portrait of HH Dalai Lama.

Dharamshala: Thirty-one years ago on this day, the Tibetan spiritual leader His Holiness the Dalai Lama was conferred the Nobel Prize for his promotion of peace and non-violent approach to Tibetan freedom struggle.

In addition to the occasion, this year is also dedicated to express gratitude to His Holiness the Dalai Lama,

As the world is dealing with the crisis of the Covid pandemic, the celebration and gathering of any sort are restricted, however, keeping in view all the necessary covid precautions, the Tibetans did celebrate the day in a modest fashion.

In Nepal, a small function was prepared by the Tibetan Coordinator’s Office under the vigilance of Nepalese police.

The function was attended by the Khen Rinpoche of Thukche Choeling nunnery, Representative of Tibetan Coordinator’s Office, members of the local assembly, settlement officer, and other representatives.

Due to the strict vigilance, the function was kept short where the guests presented mandala offering to the portrait of His Holiness followed by the singing of Tibetan and Nepal’s national anthem. 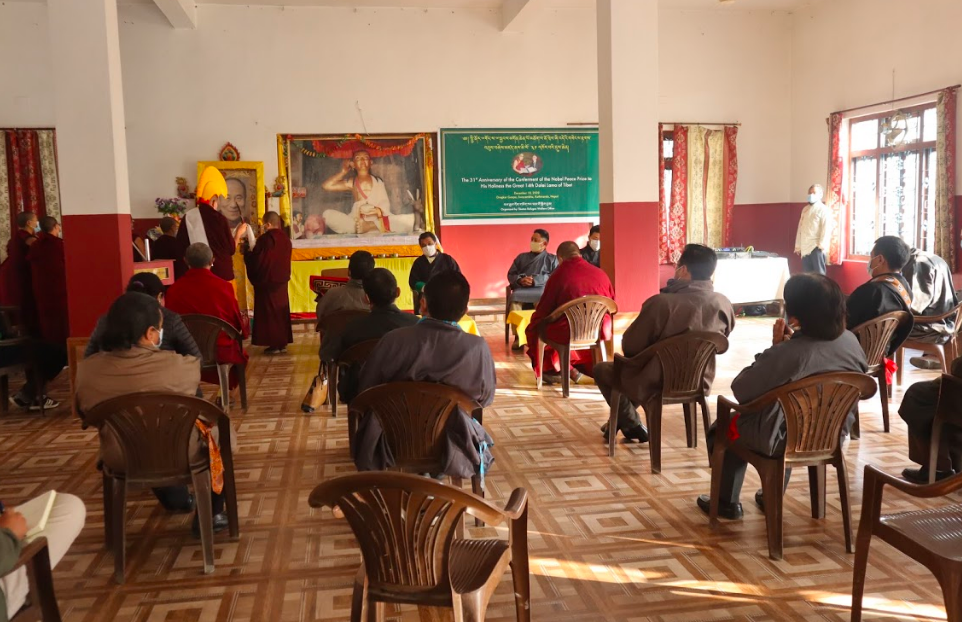 Strict covid precautions maintained at the celebration in Nepal.

In Shillong, The Tibetans observed a small celebration whereby traditional rituals were performed. Settlement officer Pema Dhondup and parliamentarian Yangchen Dolkar led the mandala offering to His Holiness’s portrait followed by the signing of a Nobel song by the students of Sambhota school.

The official statements of Kashag and Parliament were read out to the public. The program concluded with the prize distribution to the winners of the Tibetan language contest. 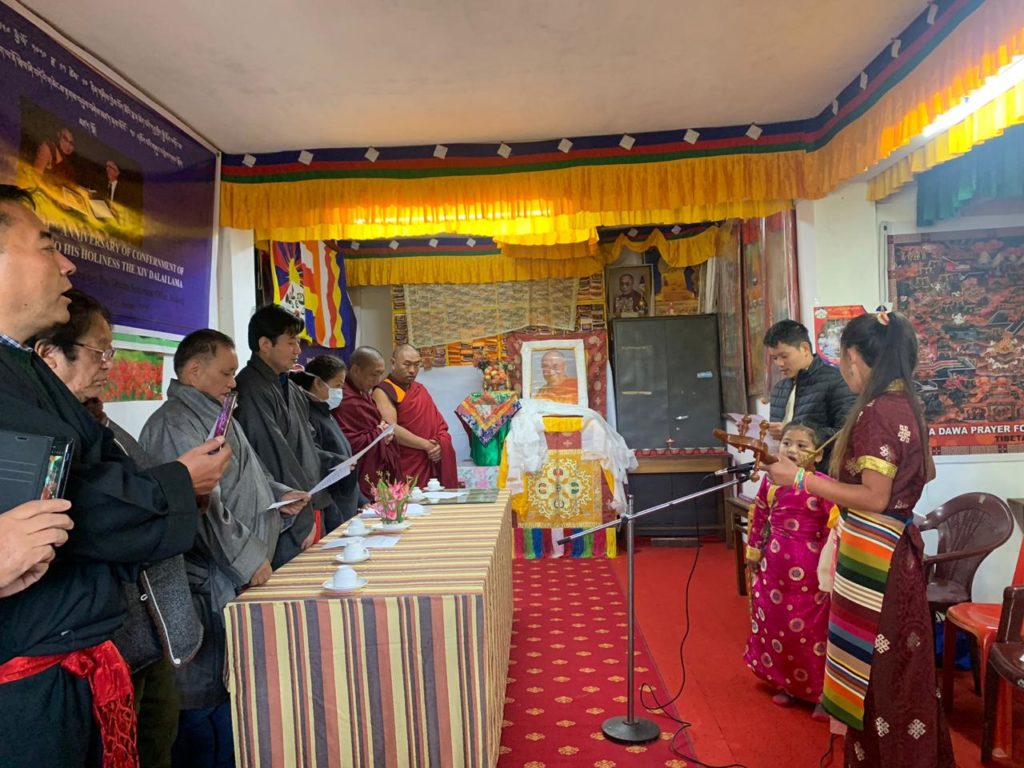 While offering the deepest gratitude to His Holiness the Dalai Lama, Representative Chhimey Rigzen briefed the statement of Kashag. He thanked all the friends of Tibet for their support and being with Tibetans in all these years.

The Kashag’s statement is translated into various languages. Read the statement in German, Italian and Czech.

Europe member of Tibetan Parliament in Exile, Jampa Samdho, briefed the statement of the Parliament.

Similarly, various Buddhist centers in Italy celebrated the occasion by offering long life prayers for His Holiness the Dalai Lama. Institute Lama Tzong Khapa in Pomaia and Institute Samantabhadra in Rome arranged the special prayer services at the respective centers. Whereas, Ghe Phel Ling Tibetan Buddhist center situated in Milano organized a virtually prayer service dedicated on the celebration of the 31st anniversary of the Nobel Peace Prize conferment on His Holiness the Dalai Lama. 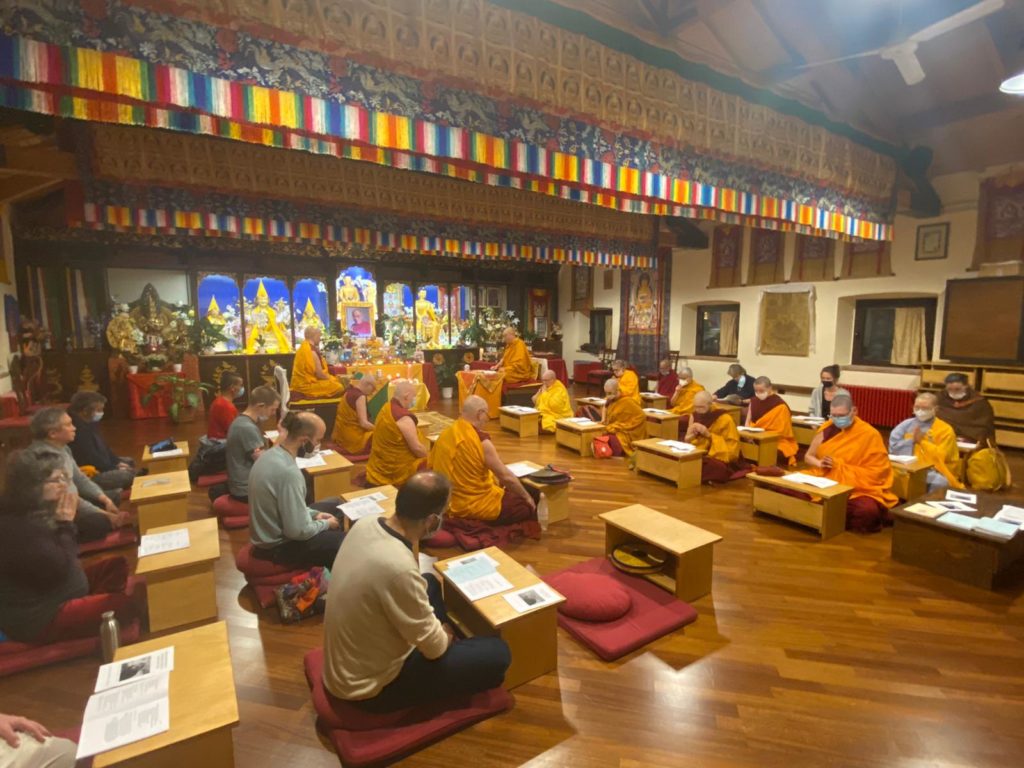 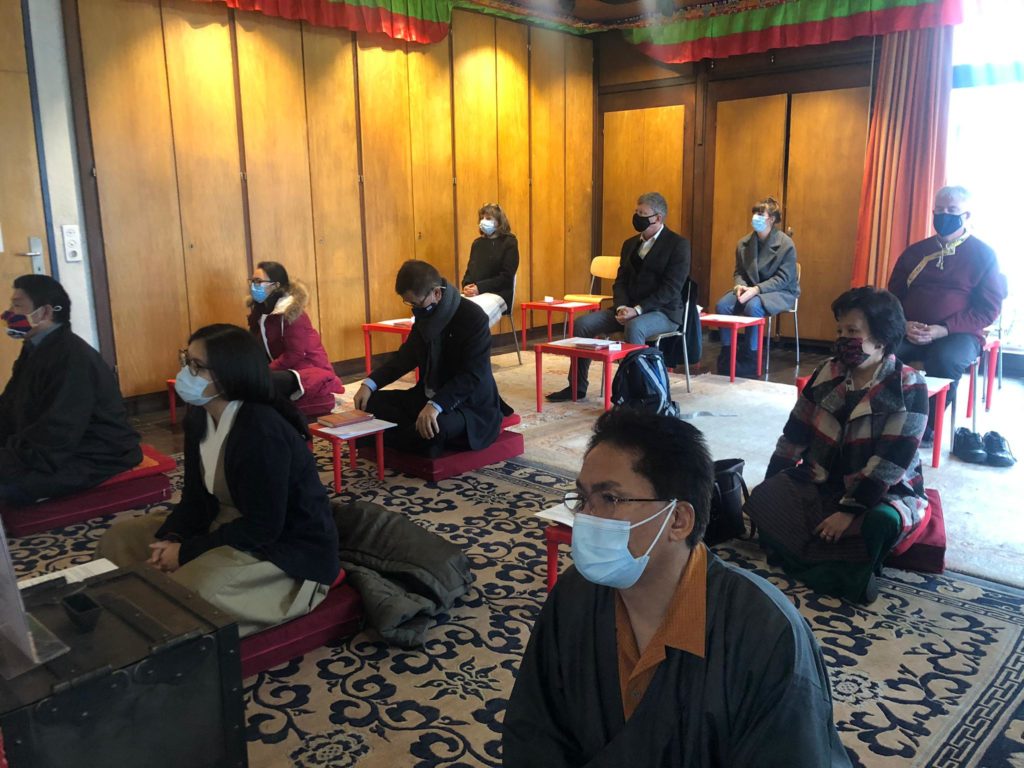 Amid widespread of pandemic, friends of Tibet joined the religious celebration of the 31 anniversary of the Nobel Peace Prize conferment on His Holiness the Dalai Lama, at Tibet Institute Rikon on 12 December.

The Settlement Office of Kullu Manali observed a ceremony of gratitude, honoring Tibet’s foremost leader His Holiness the Dalai Lama, and his extraordinary leadership of the Tibetan cause and people.

Settlement Officer, Thupten Chophel delivered the introductory speech, calling upon His Holiness’ historic achievements and ‘Conferment of Nobel Peace Prize on H.H The Great 14th Dalai Lama’. and giving awareness of His Holiness four commitments to the audience. The gathering was restricted to less than 100 attendees in accordance with local guidelines.

TSO Kullu Manali has also taken the initiative to unveiled four large-size flex banners showcasing His Holiness the Dalai lama’s core commitments at Kullu, Manali, and Dobhi to mark “Year of Gratitude” to His Holiness. 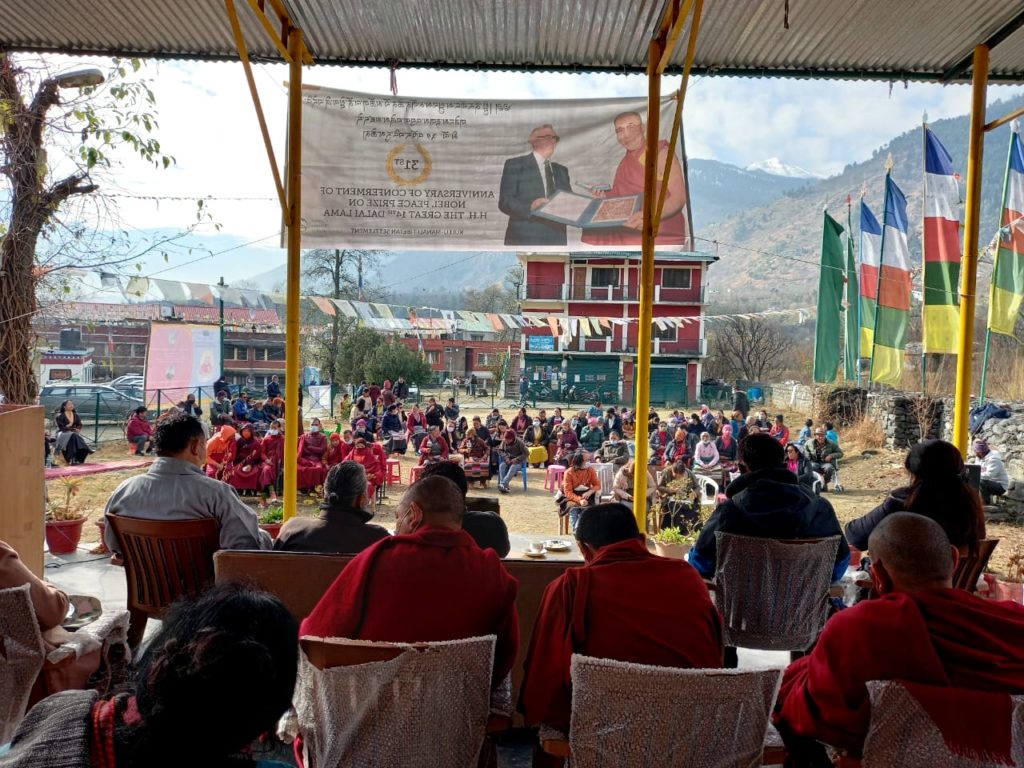 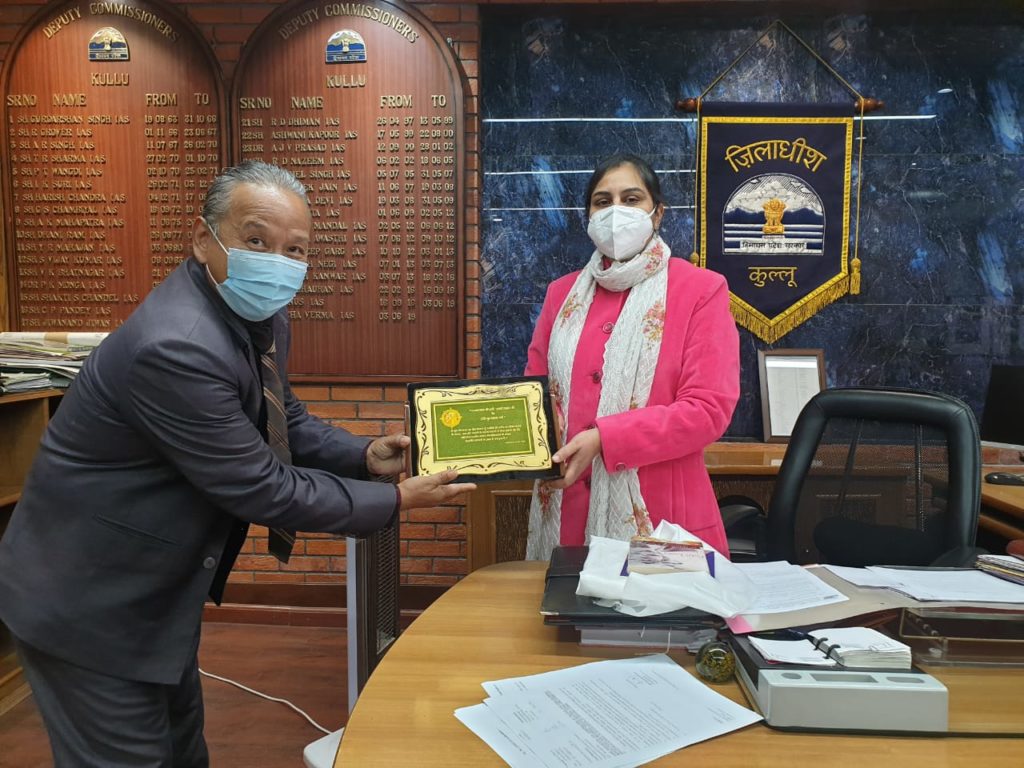 SO presenting memento and His Holiness book to Kullu Deputy Commissioner. 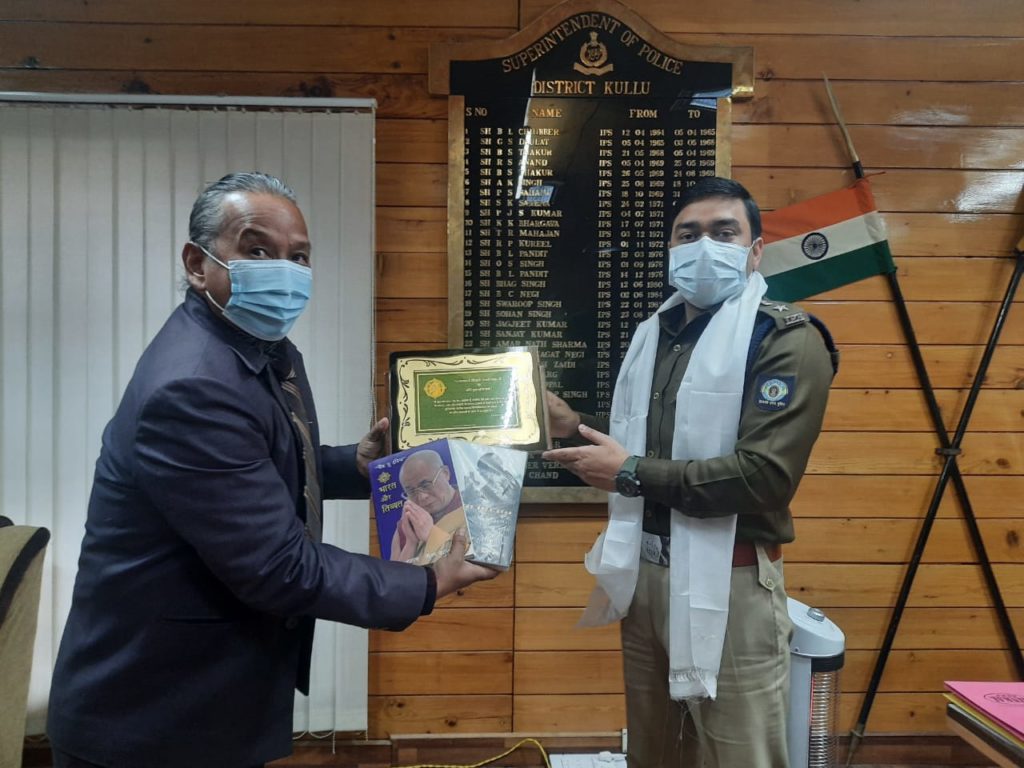 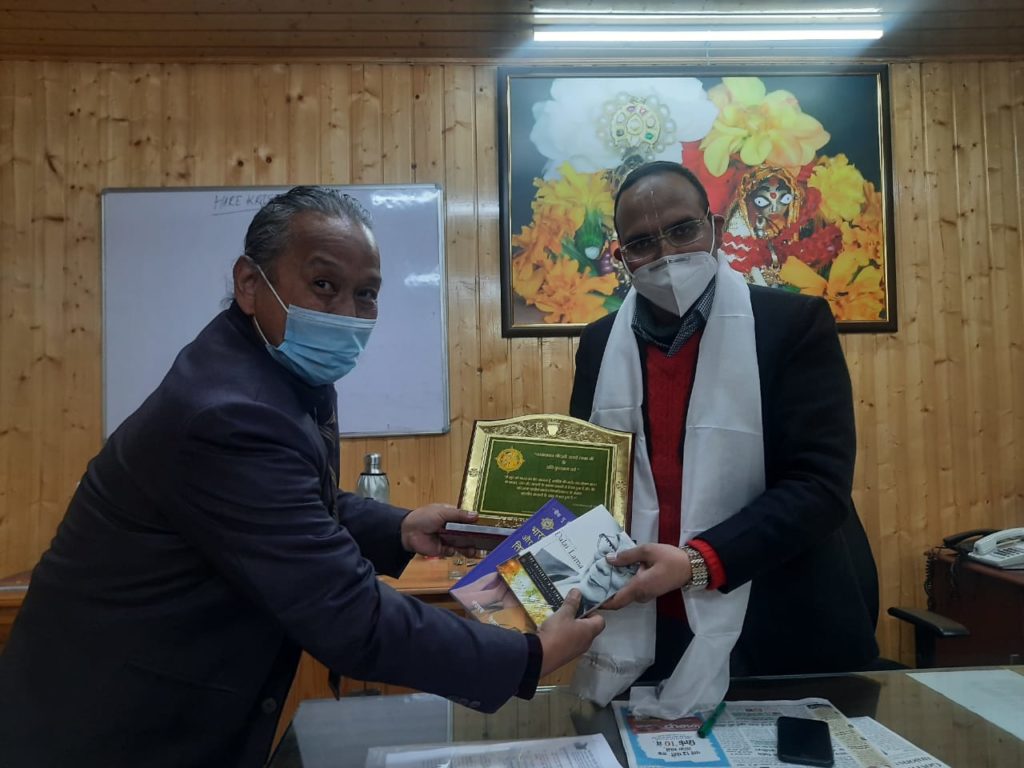 SO presenting memento and His Holiness book to SDM Kullu

Tibetans in Shimla has celebrated the occasion with an official program attended by the former Special Secretary to the Govt. of Himachal Pradesh Shri. P.L. Negi Ji as the Chief Guest, and local dignitaries of both governmental and non–governmental organizations of Shimla Tibetan Settlement.

This auspicious occasion is also celebrated with the distribution of winter wear to Old Age Home in Basantpur and the Old Aged Home, Sanjauli which comes under Namgyal Monastery, Dharamsala wherein around 66 senior citizens have benefitted with the above winter wears. This distribution act is initiated by the Shimla Gratitude Year Committee on this special day marking the 4th program of the gratitude year. 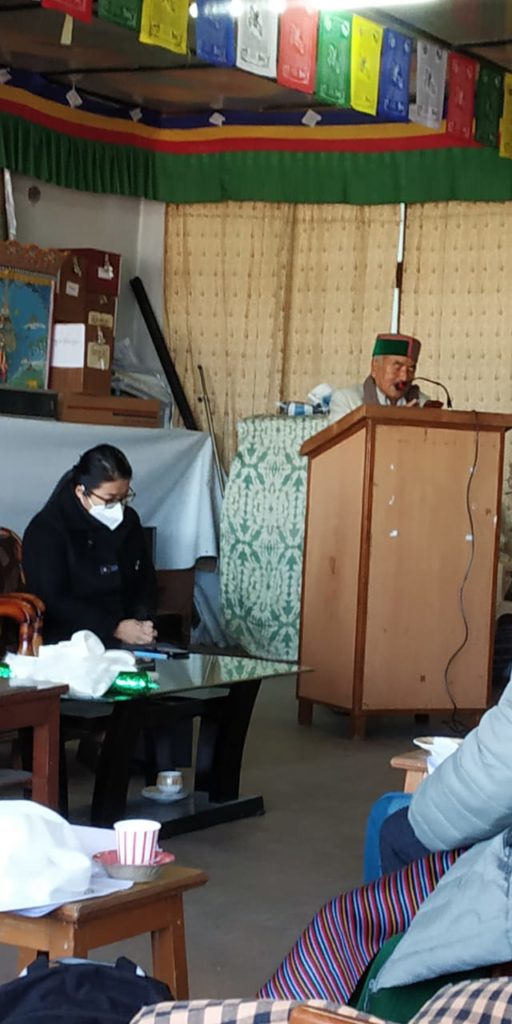 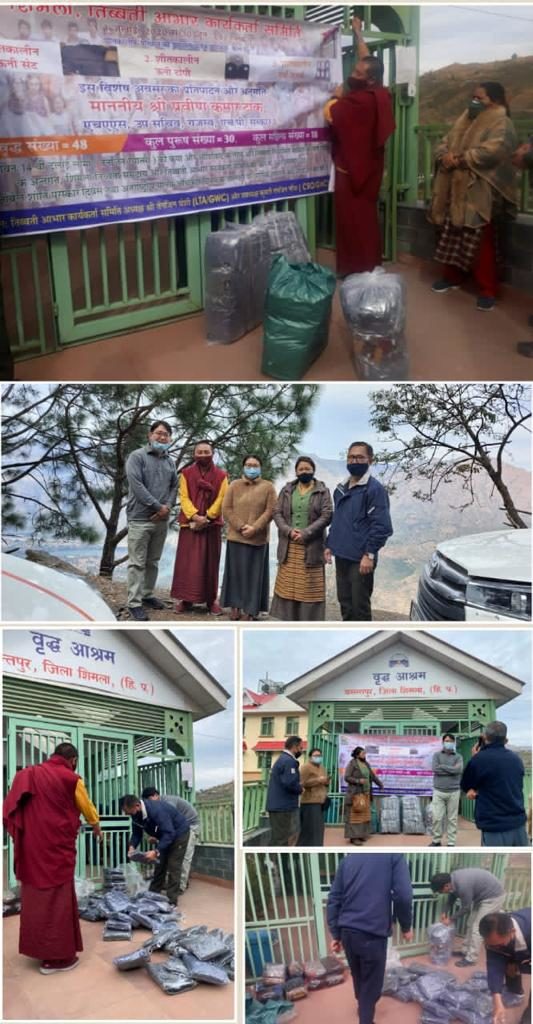 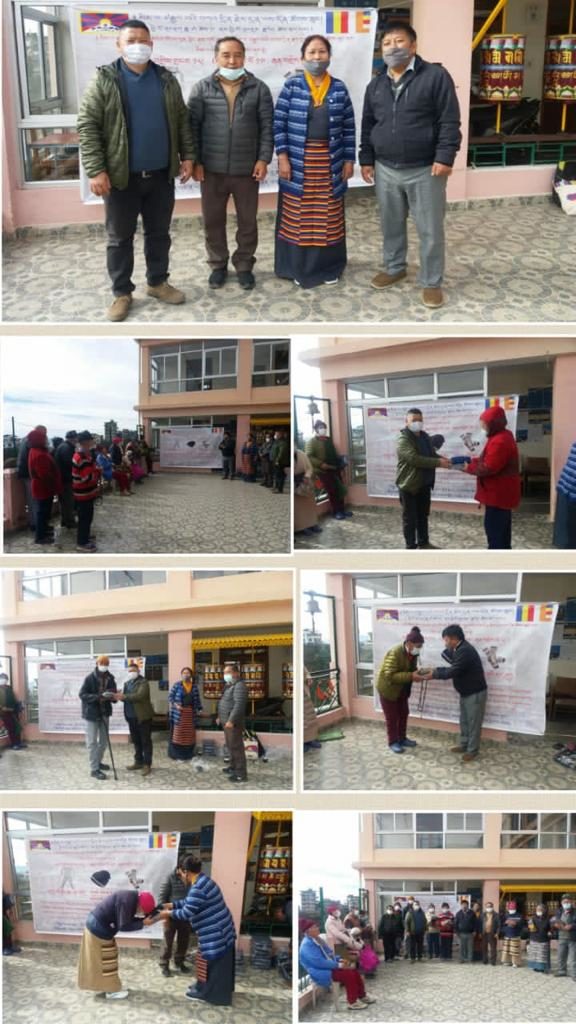 Samyeling settlement in Delhi observed the 31st anniversary of the conferment of Nobel Peace Prize to His Holiness the Dalai Lama led by acting Settlement Officer, Secretary Phuntsok Jorgye and staff.

Camp leaders, governmental and non-governmental organisations, and the Tibetan community gathered in the courtyard of Samyeling monastery where they initiated the programme with an elaborate ceremony to the protector deities. 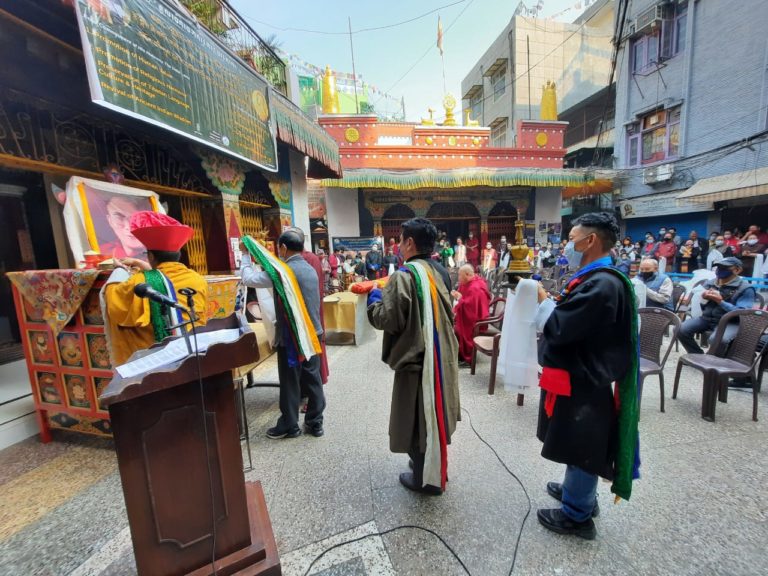 The acting Settlement Officer greeted the dignitaries and the public and read out the Kashag’s official statement, followed by the Vice President of the Local Tibetan Assembly’s reading out of the Tibetan Parliament’s statement and thank you note delivered by the Camp leaders.

As the day coincided with International Human Rights Day, a bike rally was organized by the Bharat Tibbat Sahyog Manch in the afternoon from Rajghat to Majnu Ka Tilla. 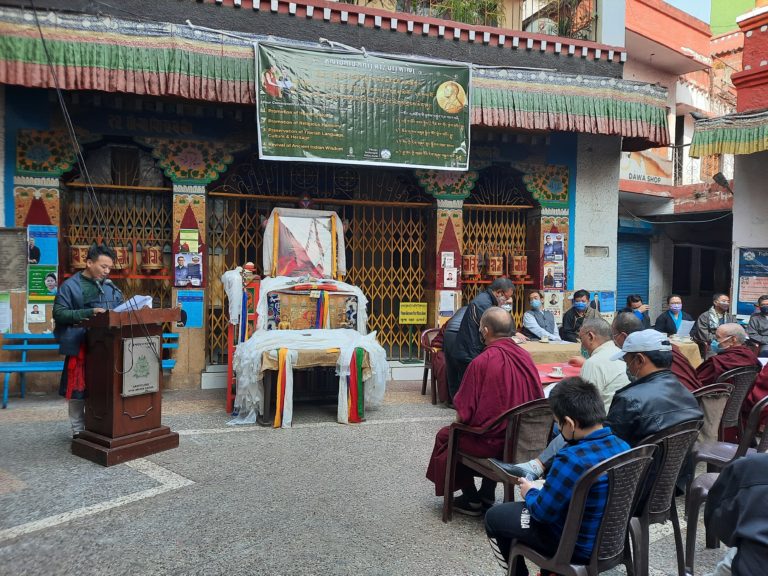 The acting Settlement Officer reads out the Kashag’s official statement.

A short programme was held at the Samyeling monastery’s courtyard presided by acting Settlement Officer and the chief guest, Shri Indresh Kumar, founder of the Bharat Tibbat Sahyog Manch delivered his address.

In his address, the chief guest greeted His Holiness on the occasion of the 31st anniversary and wished him longevity, saying that His Holiness and Tibetans symbolize peace while China represents violence. He noted, on the occasion of International Human Rights Day, Tibetans inside Tibet are suffering immensely under China’s repressive system which must never be forgotten and his support for the Tibetan cause.  He concluded that the need of the hour as the world continues to suffer from the Wuhan-originated coronavirus, is for Indians and the international community to boycott Chinese manufactured goods. 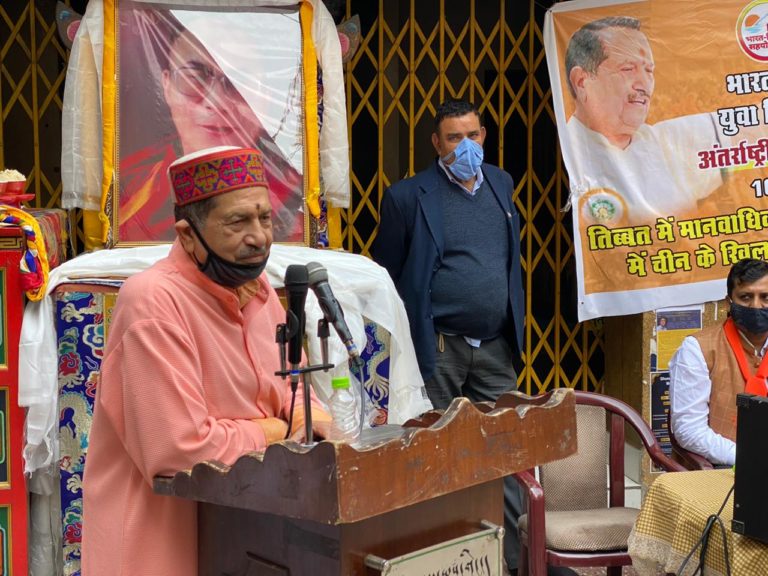 In Mandi, Tibetans organised two days exhibition on four Principal commitments and the life history of His Holiness the 14th Dalai Lama as part of the gratitude year program.

Shri Vishal Thakur (Vice president of ITFA) who is a prominent supporter of the Tibetan cause was the guest. Chief Guest  Sh. Jatin Lal, Additional Deputy Commissioner (ADC) unveiled the exhibition.

The main objective behind hosting the two-day exhibition was to educate and create awareness about the four main principal commitments of His Holiness the great 14th Dalai Lama to the Indians and as well as to the Tibetan public. And various books on Tibet and His Holiness Dalai Lama were also displayed during the exhibition. 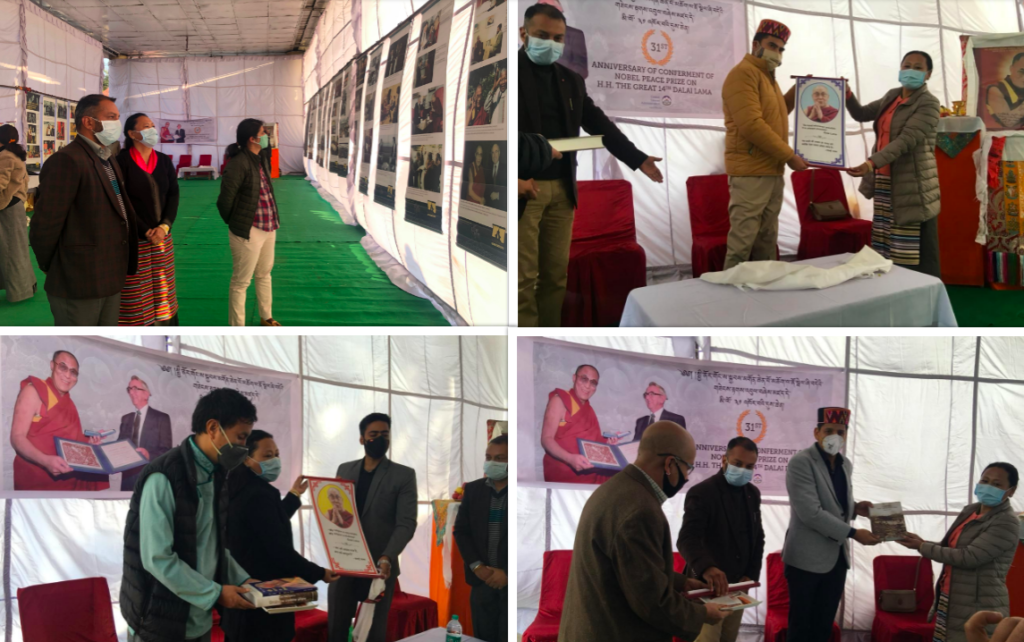 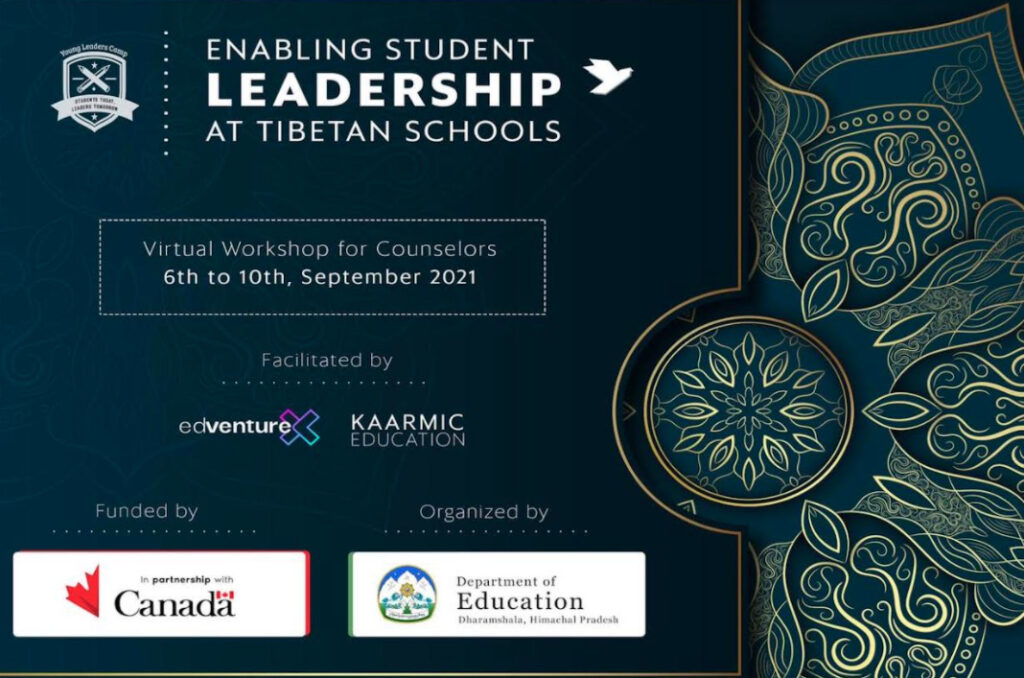 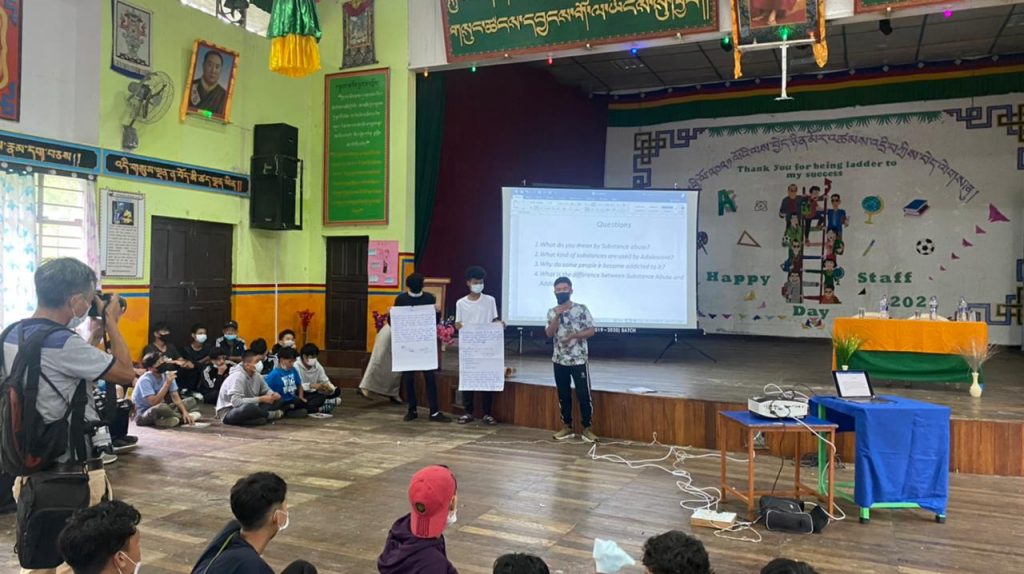 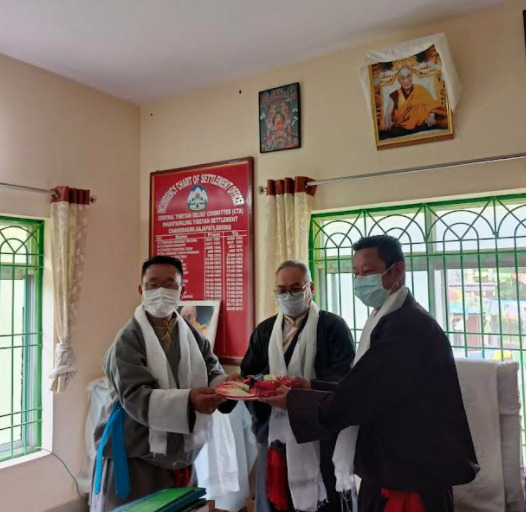 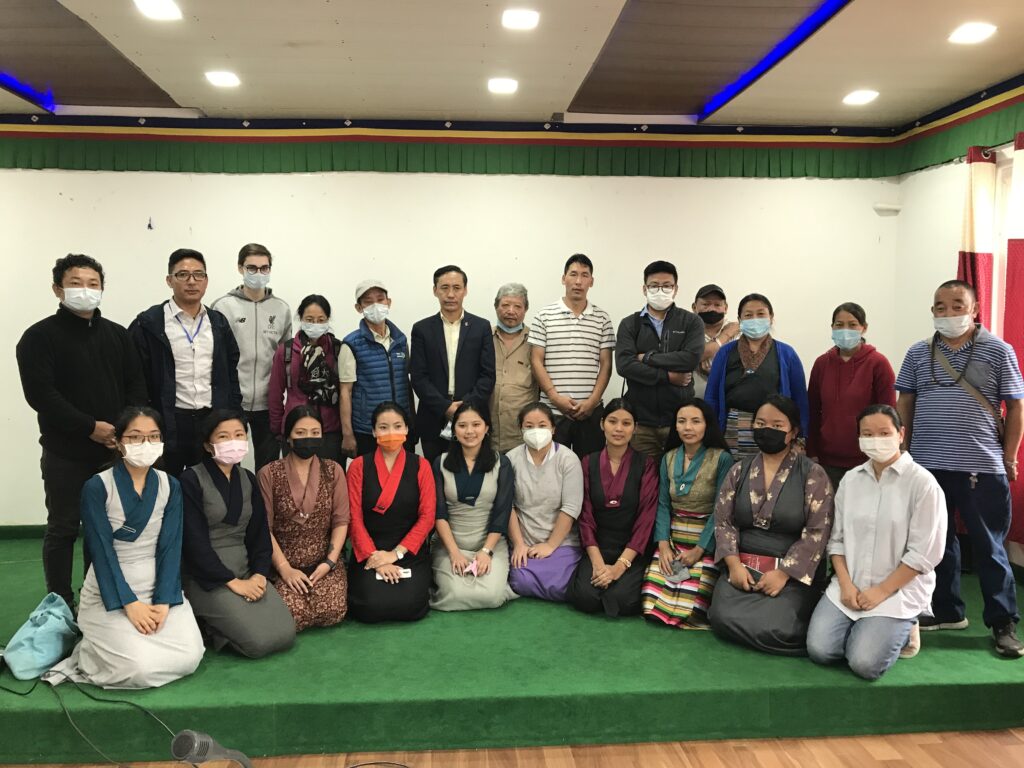