Tibetans end hunger strike outside UN, 1 month after it began 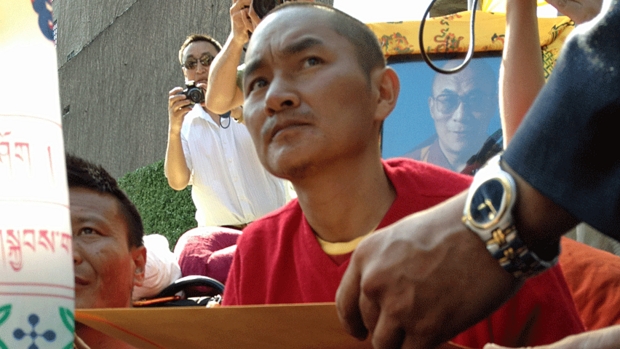 Tenzin Choeki Gyalsen hands over an envelope with documents outlining the concerns Tibetans would like the United Nations to raise with China in connection with its repressive rule over Tibet. On Thursday afternoon, Gyalsen and two other men ended a month-long hunger strike they have been waging outside the UN headquarters in New York.

Three Tibetans who have been quietly starving themselves in the shadow of the United Nations headquarters in New York City in an effort to get the UN to pressure China to end its repressive rule over Tibet ended their hunger strike Thursday, a month after it began.

Richard Bennett, special adviser to the UN assistant secretary general on human rights, met with two of the men and agreed to appoint a special rapporteur for human rights to look into the hunger strikers’ concerns, according to supporters of the men who spoke to the media.

They sealed the deal — and broke their month-long fast — by drinking a glass of orange juice.

Only two of the hunger strikers were present for the end of the strike. The third, Dorjee Gyalpo, 69, had been forcefully removed from the protest site three days earlier by police when he couldn’t stand up when asked to do so by officers.

Ivan Simonovic, the assistant secretary-general of the Office of the United Nations High Commissioner for Human Rights, is handed an envelope with the demands of the hunger strikers on March 22. (David Common/CBC)

The officers gave him no option but to leave by ambulance, and he was transported to New York’s Bellevue Hospital, where he continued his fast.

Like his fellow hunger strikers, he told media he was ready to die unless the UN dispatched a fact-finding mission to Tibet.

The three activists have also been calling on the UN to pressure China to end the de facto state of martial law in the region, whose people have long been oppressed by Chinese authorities bent on assimilating them into Chinese culture and squashing their attempts to gain full autonomy for Tibet.

In the last days of the hunger strike, all three men were looking increasingly gaunt, their eyes sunken from weeks of starvation. Each had lost at least 20 pounds.

But when the police came for Gyalpo, he pleaded with them to let him stay. He was weeping as they strapped him to a stretcher and carried him away. Supporters sat down in front of the ambulance, trying to block it from leaving. After 20 minutes, they were convinced to move.

Gyalpo, a Tibetan-American who lives in Minneapolis, had said goodbye to his family. He told reporters he wanted his relatives to be proud of what he’d done and that he was ready to die for this cause. To hear those words spoken in China is one thing, but across from the UN headquarters, it is altogether different.

Yeshi Tenzing, foreground in blue, Tenzin Choeki Gyalsen and Dorjee Gyalpo sit in their encampment across the street from the UN on March 19. (David Common/CBC)

March is the traditional month of protest for Tibetan activists the world over, who every year this month mark the bloody but ultimately futile uprising against Chinese rule that took place in March 1959. In China, several Tibetan monks and nuns have self-immolated in the past few weeks — Buddhists, who view their body as a temple, pouring gasoline on that body and burning themselves to death. The Chinese hide the corpses, so that they aren’t used to inspire others.

Gyalpo is the oldest of the hunger strikers in New York, and he is also the only American. The other two are much younger activists from Dharamsala, India, the home of Tibetans’ government in exile and the Dalai Lama, their spiritual leader.

Yeshi Tenzing turned 39 in the early weeks of the fast, and Tenzin Choeki Gyalsen is 32. Gyalsen is a well-known activist monk who fled Tibet in 1997 and is considered by Buddhists to be the 11th reincarnation of Shingza Rinpoche, a past lama, or spiritual master.

The three have spent a month together, sitting quietly on the sidewalk across the street from the UN headquarters on the east side of Manhattan,12 hours a day, seven days a week, leaving only to sleep in the homes of supporters, since city rules prevent them from camping on the street overnight. They would return no later than 7 a.m. the next day.

Gyalpo, 69, was forcibly removed from the protest site March 19 and taken to hospital after he was unable to stand up when asked to do so by police. (David Common/CBC)

The Tibetan Youth Congress organized the New York protest, and its members waited patiently in front of the UN along with the hunger strikers, hoping someone would emerge from inside to address their concerns.

Bennett was the second official to meet with the protesters. Earlier in the strike, another UN representative came out to shake hands and talk with the hunger strikers. They had been hoping to meet with UN Secretary General Ban Ki-moon himself, but he never showed up at the protest site.

Others have come, though, over the course of the past month. Tourists found the protest a curiosity, taking photos from double-decker buses. U.S. actor Richard Gere, a Buddhist, paid a visit, hoping to raise awareness of the plight of Tibetans and the hunger strike, which went largely unnoticed in this thumping metropolis.

The end of the hunger strike couldn’t have come sooner for those concerned about the men’s health. In the first three days of a hunger strike, the body can feed off stored-up glucose. When that is exhausted, the liver starts to process body fat. Typically, that lasts about three weeks, and then the body enters starvation mode, raiding its own muscles, bone marrow and organs for energy, which is considered life-threatening.

The men’s bodies were likely in this final dangerous phase when the strike ended.