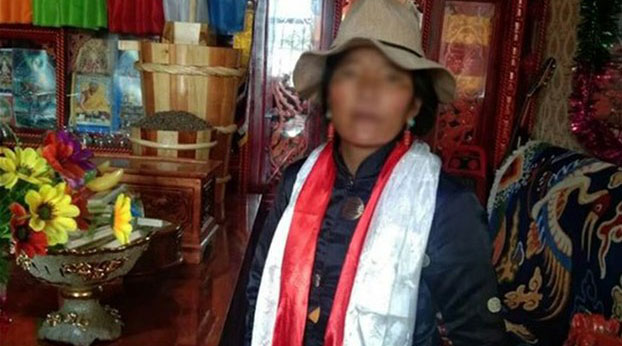 A Tibetan woman jailed for 15 months for spreading word of a relative’s public call for the release of Tibet’s Panchen Lama has been freed crippled and in failing health after serving her full term in prison, Tibetan sources said.

Dolkar, who was convicted in May 2019 of sharing news amid tight information curbs of the protest by her nephew Wangchen, was released on Aug. 15 and is now receiving medical care at her home in Sershul (in Chinese, Siqu) county in Sichuan’s Kardze (Ganzi) Tibetan Autonomous Prefecture, a Tibetan source in exile told RFA.

“Dolkar visited the hospital as soon as she was released on Aug. 15 because of her severe health condition,” RFA’s source said, citing contacts in Sershul and speaking on condition of anonymity.

“While she was in prison she was tortured and made to lift stones and do other hard work, and her body is all bruised. Because she was not able to get treatment on time, her limbs are crippled and she’s now immobilized,” he said.

“She’s now undergoing treatment at her home,” the source said.

On May 8, 2019, authorities in western China’s Sichuan province handed jail terms to Dolkar and her nephew Wangchen, who was sentenced to a prison term of four years and six months for shouting slogans calling for the release of Tibetan spiritual leader the Panchen Lama, who disappeared into Chinese custody as a child in 1995, sources told RFA in earlier reports.

Two other Tibetans, identified only as Lobsang and Yonten, were each fined 15,000 yuan (U.S. $2,211) and ordered to attend political re-education classes on “issues of national security” for six months, sources said.

Tibet’s Panchen Lama, Gedhun Choekyi Nyima, was recognized on May 14, 1995 at the age of six by the Dalai Lama as the 11th Panchen Lama—the reincarnation of his predecessor, the 10th Panchen Lama.

Tibetan tradition holds that senior Buddhist monks are reincarnated in the body of a child after they die.

Three days later, the young Panchen Lama and his family were taken away by Chinese authorities, who then installed another boy as their own candidate in his place.

Chinese authorities have meanwhile had difficulty persuading Tibetans to accept their candidate, Gyaltsen (Gyaincain, in Chinese) Norbu, as the official face of Tibetan Buddhism in China, and ordinary Tibetans and monks in monasteries traditionally loyal to the Dalai Lama have been reluctant to receive him.