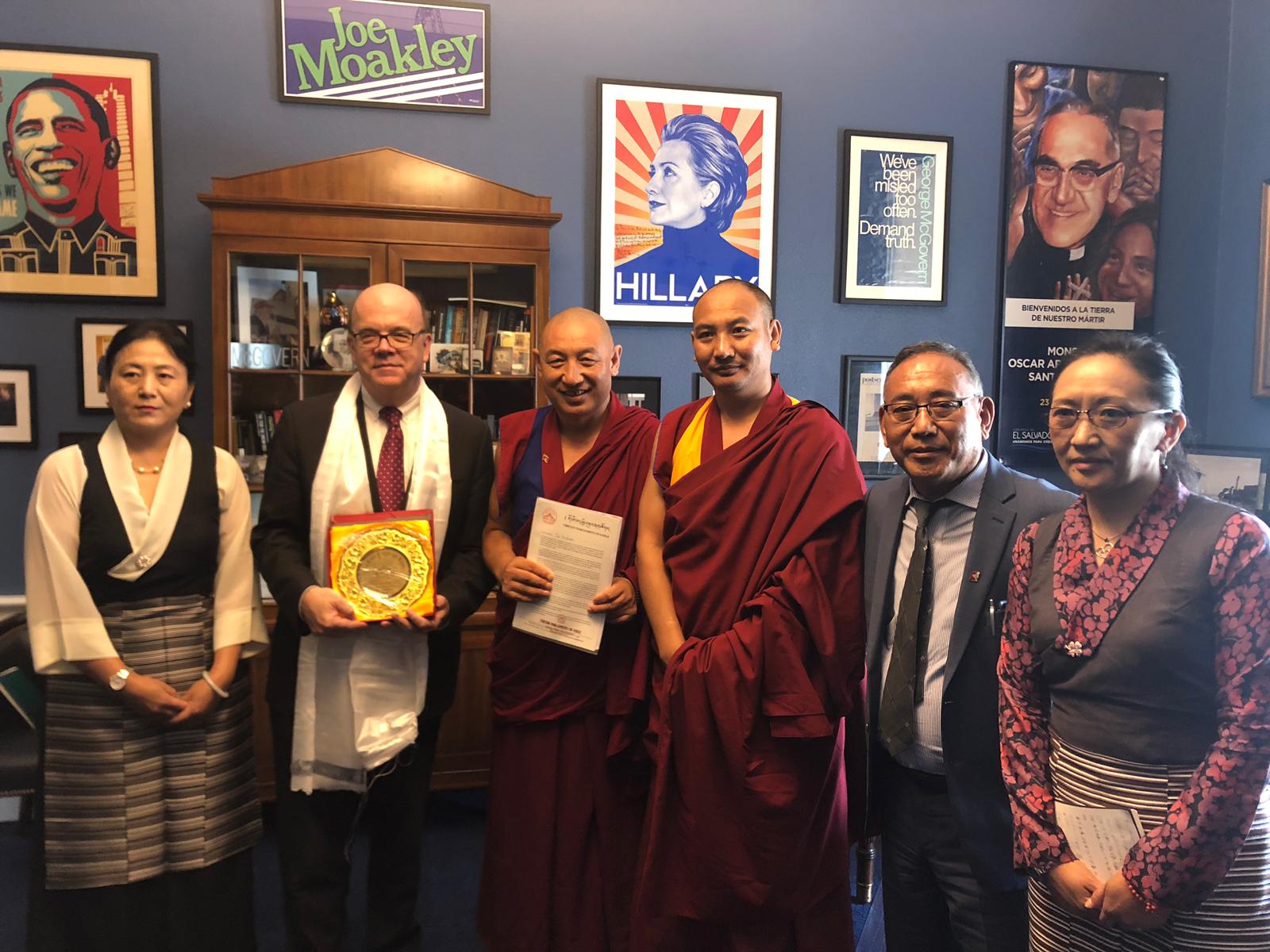 The first day of their visit began with a meeting with Congressman Jim McGovern, a congressman who has been a vocal and staunch supporter of Tibet.

While presenting the present state of affairs in Tibet, the members of delegation highlighted the deteriorating situation in Tibet. The severe crackdown on religious freedom, heavy restriction of movement, deprivation of opportunities for learning the Tibetan language were some examples they articulated. They further elaborated on how Tibetan children are prohibited in enrolling in monasteries. The delegation mentioned that a few years ago, there used to be China enforced committees that oversaw the monasteries, but now there are offices within the monasteries to monitor activities of the monks and nuns. The TPIE delegation also brought home to the Congressman about the case of 153 self-immolated Tibetans and the disappearance of Panchen Lama for three decades. The uprooting of nomadic lifestyle compelled them to steal and fight for their lives. Each delegate articulated the aspiration of Tibetan people and sought support for their struggle. The delegation urged the Congressman to pressure China in allowing His Holiness to return as aspired by almost all self-immolators.

The delegation expressed their deepest gratitude to him and to US Congress and Administration for helping Tibet in many ways and appealed that the same be continued. The head of the delegation, Juchen Kunchok, offered him a Khata, traditional white scarf to Congressman and presented a plaque appreciating his support to Tibet on behalf of TPiE. 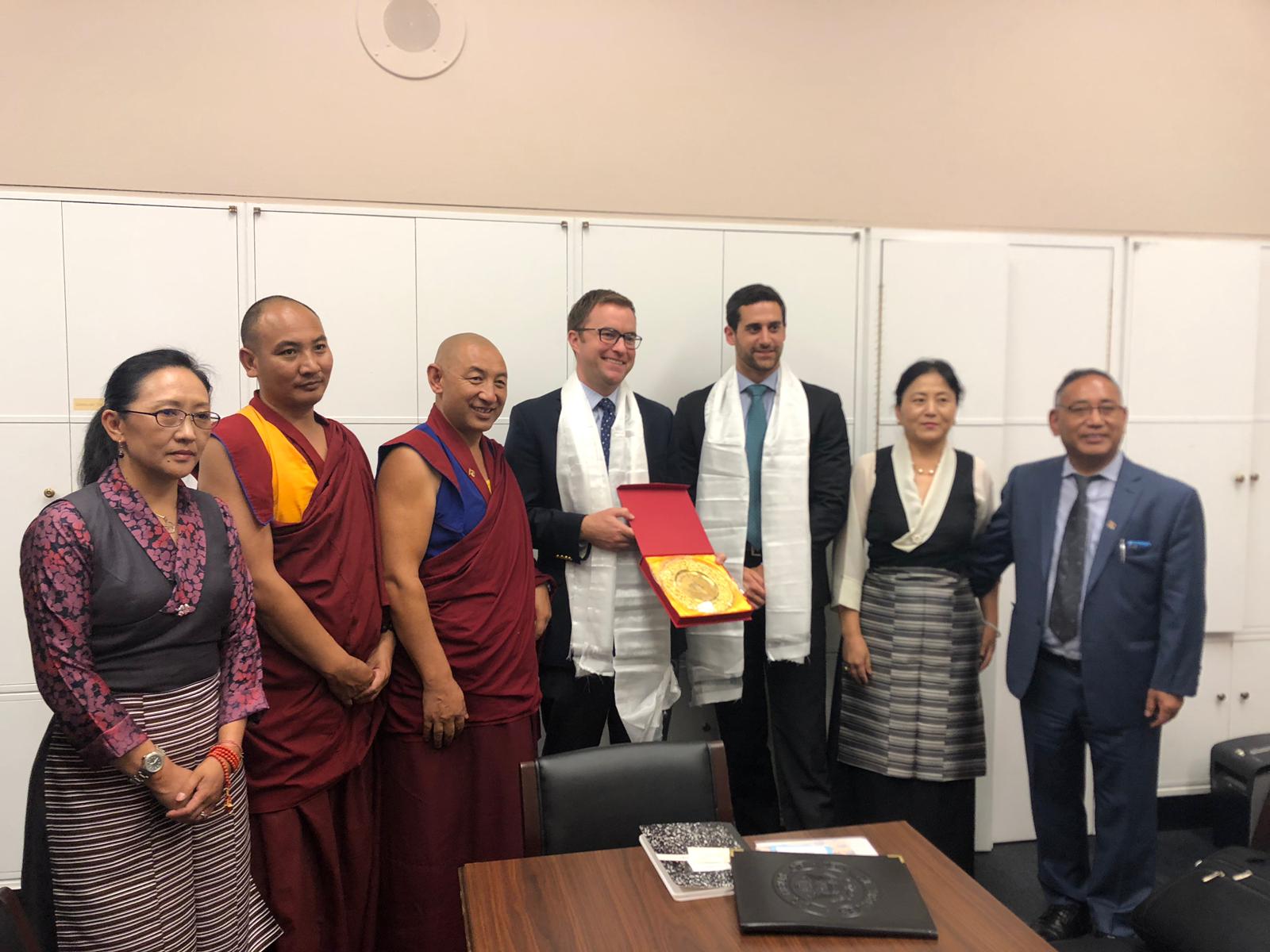 The congressman stated that he and members of Congress are very concerned about the crackdown of religious freedom and human rights etc in Tibet. Congressman assured to extend full support. However, McGovern suggested that it is important to see through the aggressive implementation of the Reciprocal Access to Tibet Act and the appointment of a special coordinator for Tibetan issues as soon as possible. Both are mandatory and he doesn’t see why the special envoy hasn’t been appointed. Congressman promised to continue to raise Tibetan issues through the Congressional Executive Commission on China ( CECC) and advised to continue to think of new ways to raise Tibet issue. He cited the recent Hong Kong protests that recently drew worldwide attention. He mentioned his plan to organize a town hall meeting in NY, where there is the largest Tibetan population in the US, to learn about the immediate concerns of Tibetans.

McGovern was in Tibet in 2015 with Speaker Nancy Pelosi and saw first hand how heavy-handed the Chinese government has been to the Tibetans. Also saw, notwithstanding, that there were many Tibetans who privately told visiting US leaders, to send for blessings to His Holiness.

The TPIE delegation later met with the Chief of Staff and Legislative Assistant to Congressman Sensenbrenner – the Congressman could not be met due to health reasons. The Chief of the Staff started off by saying, “This will be a very easy meeting because we’re on your side”.

The TPIE delegation concluded their first day by meeting with members of the National Democratic Institute (NDI) and the International Campaign for Tibet. At NDI, they met with the Deputy Director of Asia and her colleagues. NDI is currently assessing the Tibetan electoral system in collaboration with CTA’s SARD. NDI is an NGO that works in more than 60 countries. 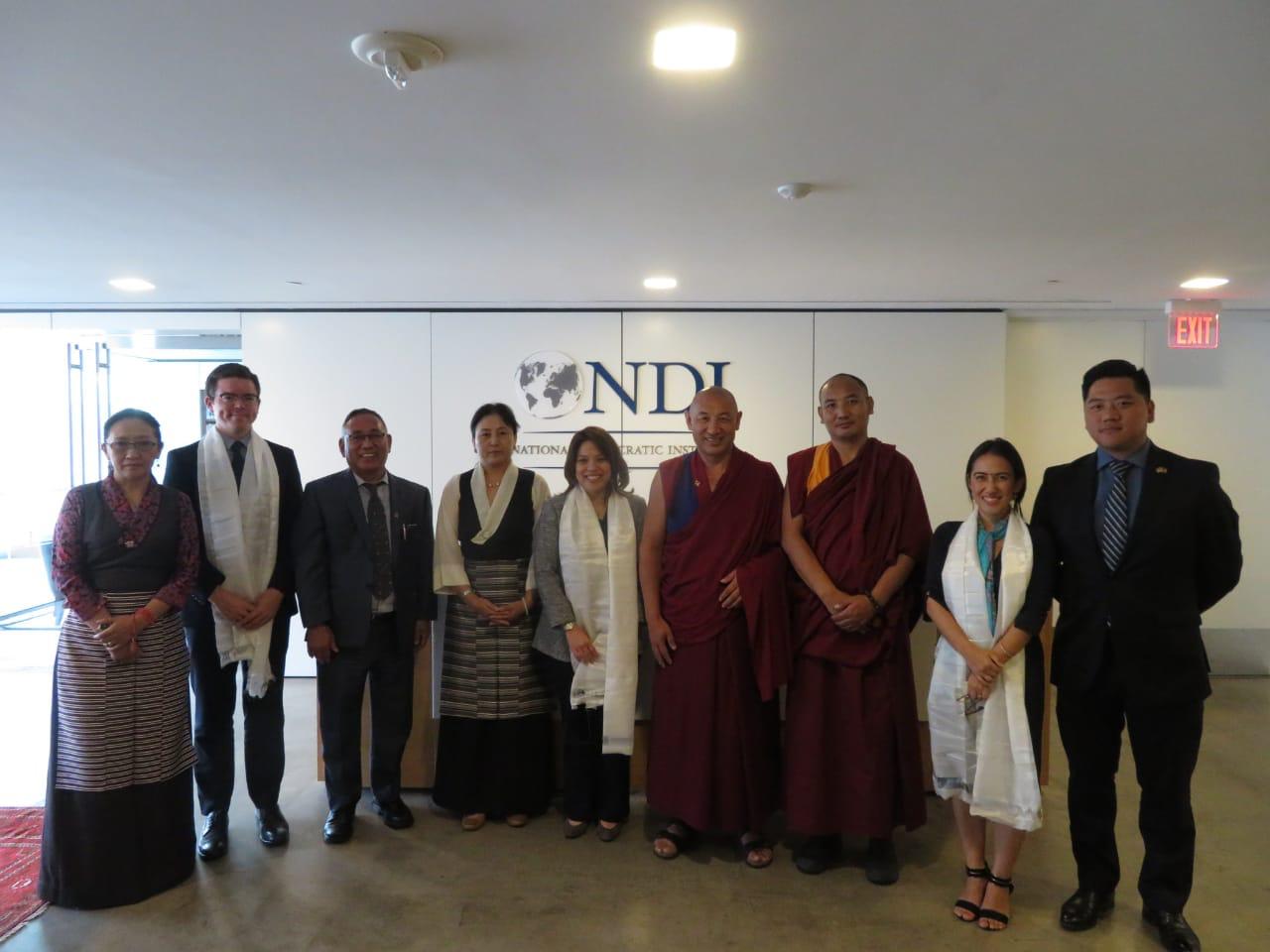 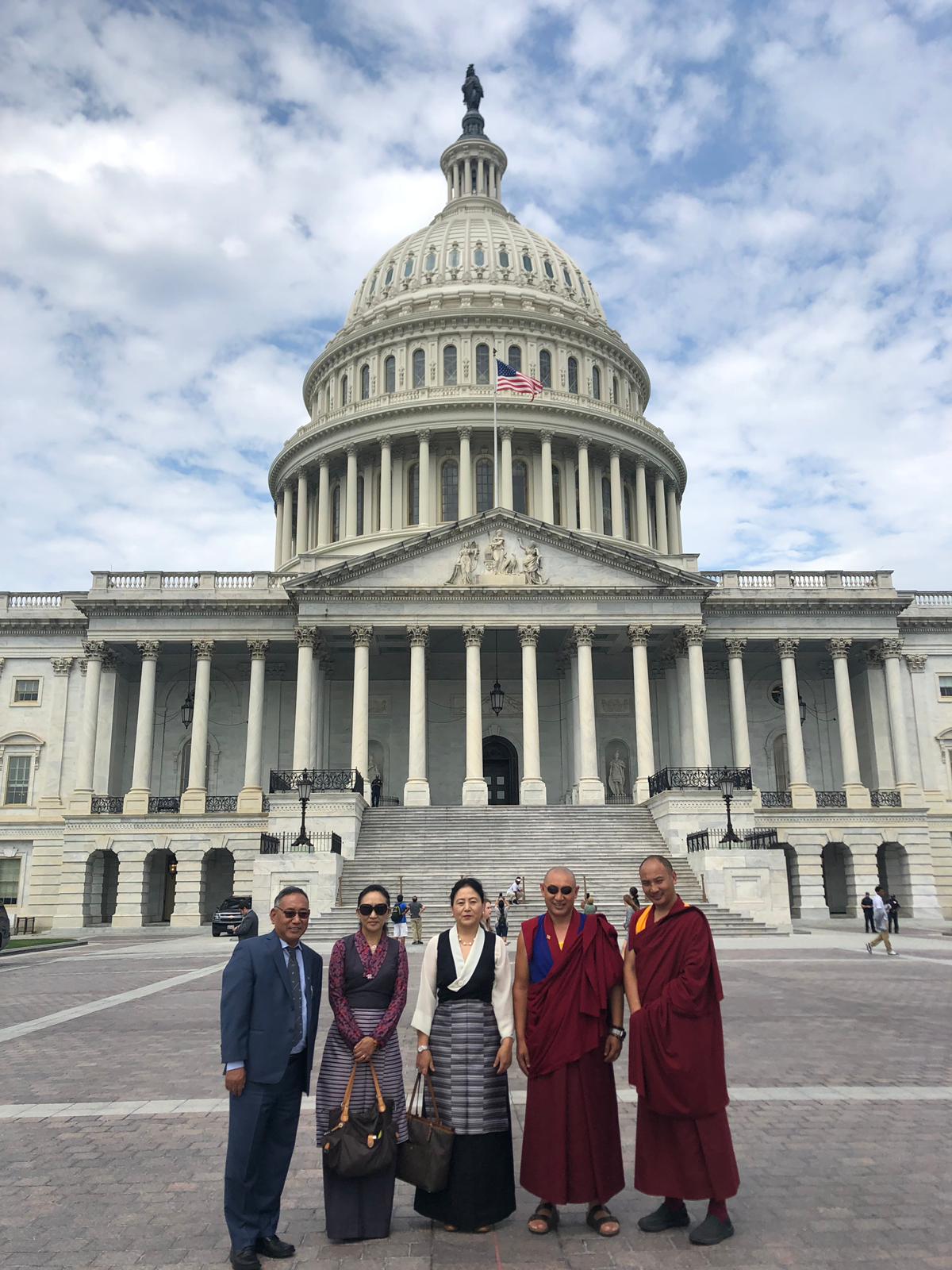 Tibetan parliamentary delegation and Representative Tsering outside the US Capitol building. 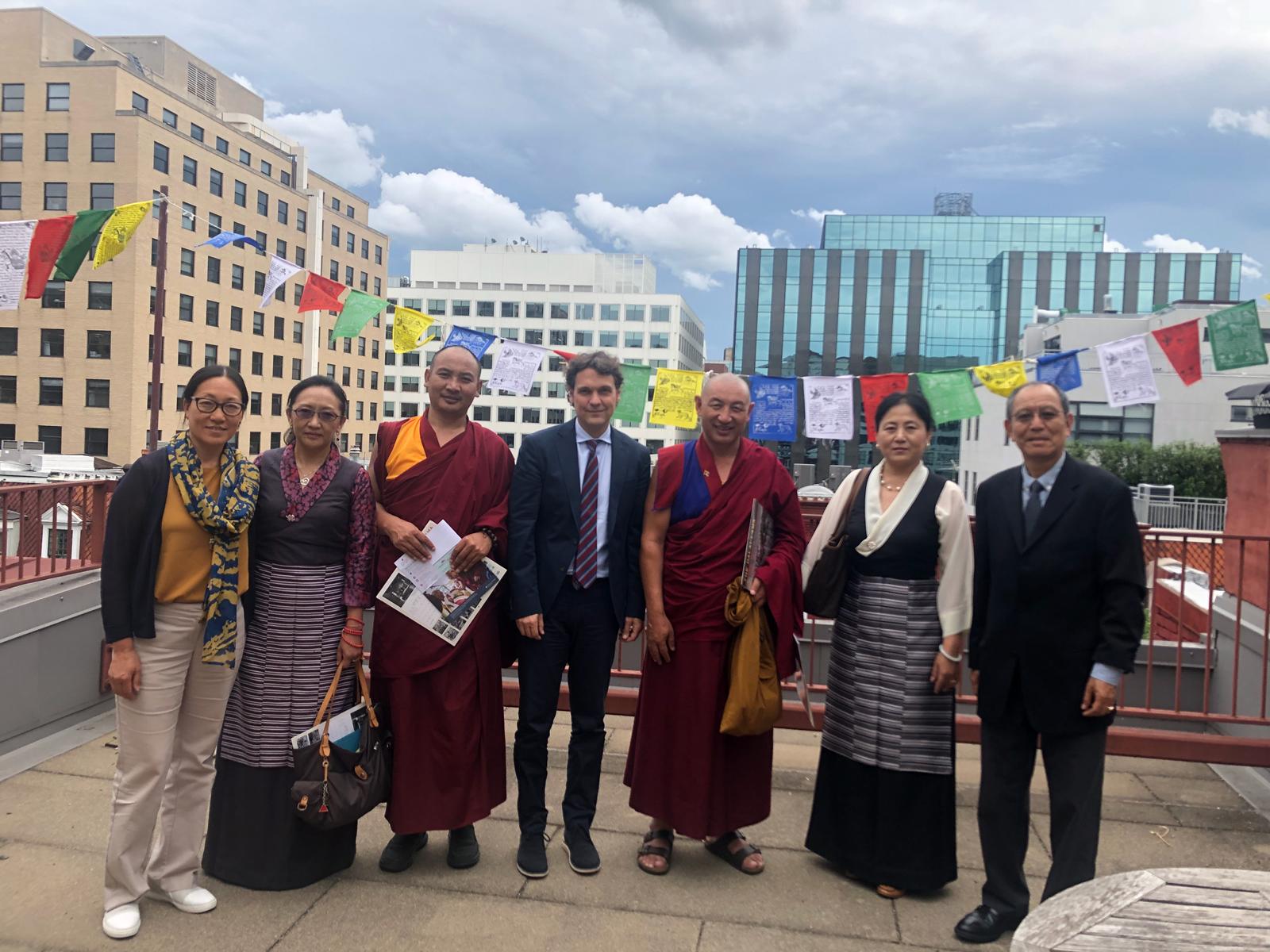