Tibetan Parliamentary Delegation Advocating for Tibet’s Cause and Issue at Arunachal Pradesh, India 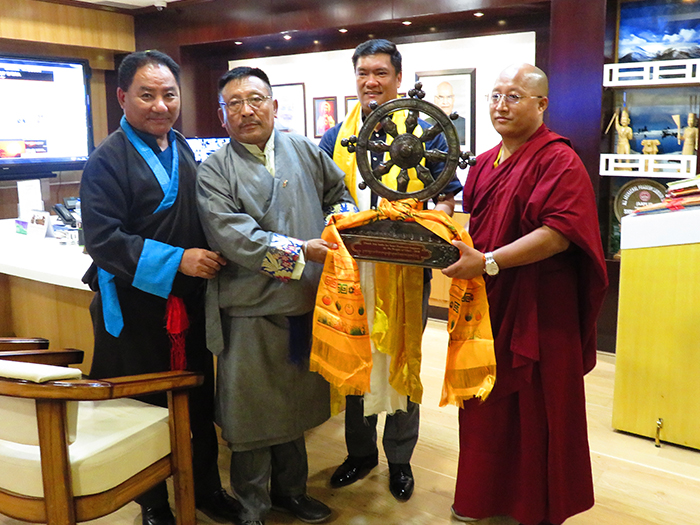 Bomdila: In par with the ongoing Tibet’s cause and issue advocacy by Tibetan Parliamentary delegation in the North-Eastern part of India, delegates Pema Jungney and Ven. Kunga Sotop reached Itanagar (AP) on 9 July and met with the State’s ministers including Jamphel Wangdue, President of Religion and Cultural Affairs in the evening of the same day.

The Tibetan Parliamentary delegates met with Tenzing Norbu Thongdok, Speaker of Arunachal Pradesh Legislative assembly and Secretary of the assembly on the next day. They engaged in vigorous discussion over the probability of the members of State’s assembly to join Tibet support groups and on their visit to Dharamsala in Himachal Pradesh in the future.

On 12 July, Shugmol (sic) meeting was held with the members of Itanagar Buddhist Cultural Society (IBCS) and thereafter, met with Pema Khandu, Chief Minister of Arunachal Pradesh. The delegates apprised the Chief Minister on various issues ranging from the possibility of members of State’s assembly in joining Tibet support groups to SUMAA protest rally against the Tibetan Rehabilitation Policy 2014 since 13 July. Pema Khandu, forthwith rang the police head-quarter in Bomdila while assuring the delegates of both the ongoing matter and the state’s full support for Tibet’s struggle movement.

The delegates also approached B.D.Sharma, Governor of Arunachal Pradesh, to whom the delegates elucidated on the critical situation inside Tibet. In reciprocal, he shared anecdotes from his visit to Tibet till Lake Mansarovar and expressed his solidarity with the circumstances of Tibetans.

On 16 July, they paid a visit to Shanti Deva Vidyalaya and as per the request by the school’s Principal, they spoke on the Tibetan Administration-in-Exile to the students of Class IX and X. In the evening around 3 pm, they met with Dr Sonal Swaroop, District Commissioner of Bomdila. After the formal introduction of the selves and the purpose of their visit, they apprised the District Commissioner on the ongoing protest rally by SUMAA, to which she assured the Tibetan Parliamentary delegation on the welfare and safety of the Tibetan residents of Tenzingang Tibetan settlement and also on the protest rally.

On 18 July, the delegates reached Tawang within the three hours journey from Bomdila. On the same day, residents of Tawang area, belonging to 37 different non-governmental organisations (NGOs) gathered together to condemn the protest rally against Tibetans by SUMAA. The delegation met with Lama Tashi Chogyal, President of India-Tibetan Friendship Society (ITFS) and Lhundup Chosang, President of Bharat-Tibbat Sahyaog Manch, (BTSM Tawang Unit) along with nine other representatives. Thereupon, the representatives informed the Tibetan Parliamentary on the resolution passed to condemn the protest against the Tibetans by the student organisation and also on the gratefulness of His Holiness the Dalai Lama and Central Tibetan Administration to the Mönpa people. They expressed the opposition of the Mönpa people against the protest rally and during the dinner gathering on 19 July, a copy of condemnation letter against the ‘groundless charges and issues roused by the so-called SUMAA (sic)‘ was presented to the Tibetan Parliamentary delegation.

In the evening of 19 July, the delegates met with seven members of Tawang District Students Union, along with its President.

The next day, the delegates met with Sang Phunstok (IAS), District Commissioner, Tawang and discussed on the ongoing protest-rally. Thereafter, the Tibetan parliamentarians left for Bomdila. They also visited a school built under the patronage of Kagyue monastery at the northern part of Tawang. Around 5 in the evening, they reached Bomdila and met with representatives of Bomdila, Rupa, and Shergao including Khen Rinpoche of Bomdila monastery. They denied the allegations of Monpas protesting against the Tibetans as proliferated in various social media and expressed their strong condemnation over a protest by the so-called student’s organisation against the Tibetans.

Likewise, upon meeting with Raja Bhantia (IPS) Superintendent of Police (SP), Bomdila, he also urged the delegates not to worry over the said matter and convinced them of the residing Tibetans’ security. The Tibetan Parliamentary delegates also expressed their gratitude to him on behalf of Tibetan Parliament-in-Exile and Central Tibetan Administration, stating that they had heard of all the assistance and support rendered by the Superintendent of Police to the Tibetans via the locality’s Tibetan Settlement Officer.

On 21 July, they met with Naresh Glow, former MLA and Minister, who expressed deep mortification over the 13 July protest-rally and solicited forbearance over the matter as he thanked the two Tibetan parliamentary delegates for their visit. 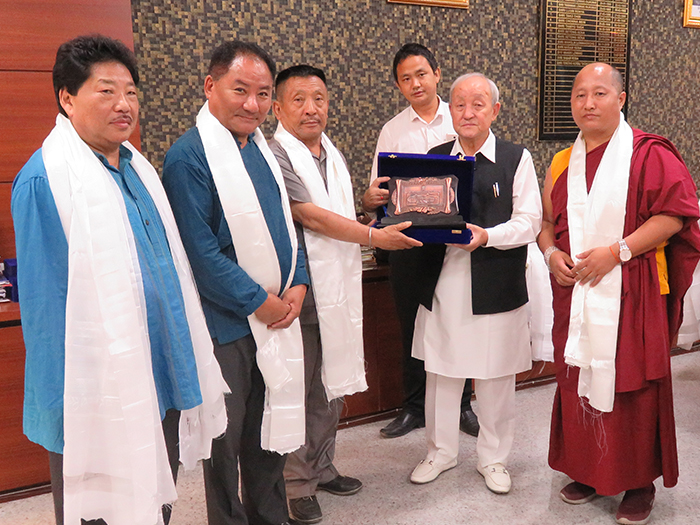 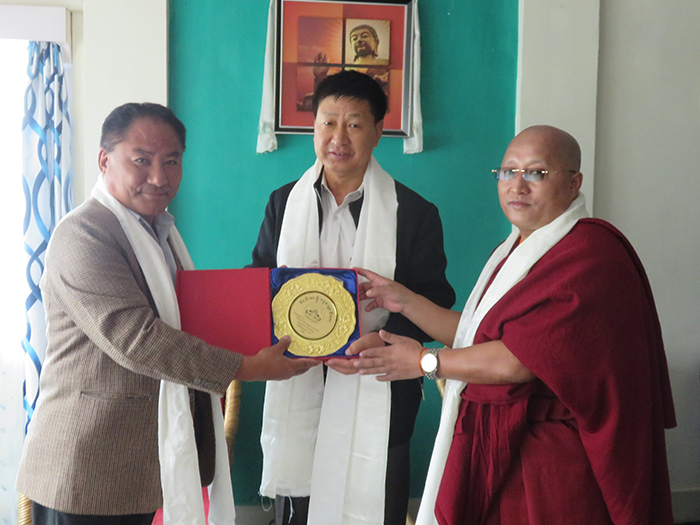 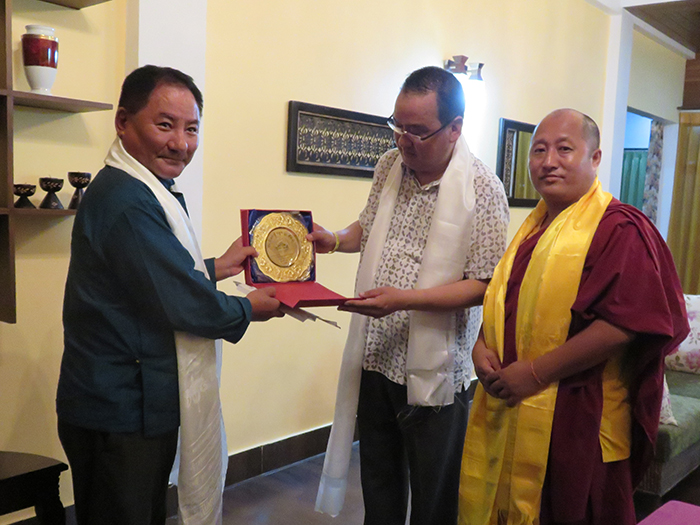 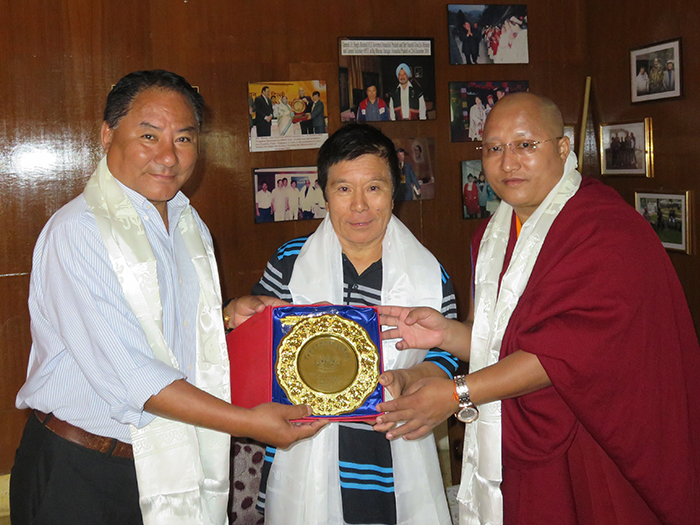 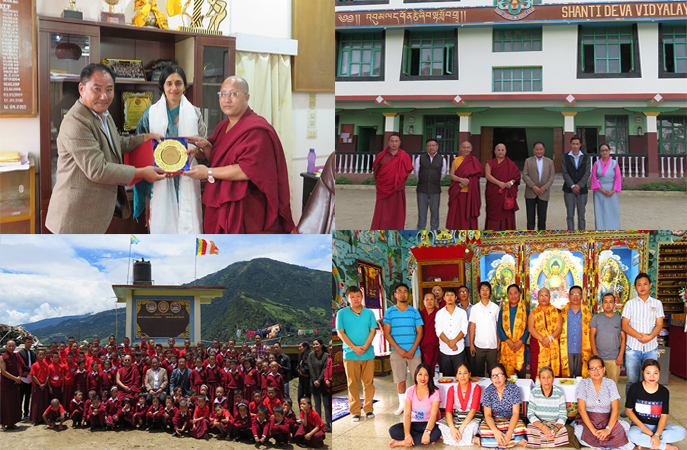