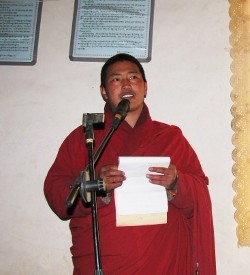 Jinpa Gyatso, 38, a monk from Mayul Samten Choekorling Monastery in Machu, was arrested on 25 October at around 2 pm (local time) while he was on his way to meet an ailing senior lama from his monastery who was receiving treatment at a hospital in Tridu (Ch: Chengdu) city, Sichuan Province, as source told TCHRD.

According to the source, Gyatso was arrested evidently in connection with his social activities, particularly for his efforts at preserving and promoting the use of Tibetan language among fellow Tibetans in Machu County.

Earlier this year also, at around 10 am (local time) on 30 March, local police detained Gyatso who was later interrogated and fined. Gyatso had to pay a fine of Chinese yuan 40,000 to secure his release. It is not clear on what charges he was detained although local Tibetans believe that Gyatso’ arbitrary detention was linked to his social activism work including the founding of Bhoe Amay Rangkey Lasor, an organization dedicated to preservation and promotion of Tibetan language.

Founded jointly by Gyatso and some of his friends in 2009, the organization stressed on speaking pure Tibetan language, organizing classes for the local children during their winter holiday and publishing a Tibetan language journal called Rewei Kanglam (Eng: Path of Hope). Local authorities again detained Gyatso around this time and interrogated him for long hours before his released. Local authorities also issued a ban on the journal for its perceived links with politics.

Jinpa Gyatso was born in Machu County. At 11, he became a monk at Mayul Samten Choekor Ling Monastery in the region. He had also studied at Larung Gar Buddhist Institute in Serta (Ch: Seda) County in Kardze (Ch: Ganzi) Tibetan Autonomous Prefecture, Sichuan Province where he completed a course in Tibetan Grammar and Poetry in 1999. On his return to Machu, he worked as a senior administrator, handling various responsibilities at Mayul Samten Choekor Ling Monastery, among them as an accountant and as a teacher.

The current condition and whereabouts of Jinpa Gyatso remain unknown.

In recent times, TCHRD has noticed a marked rise in the arrests of Tibetan social activists including grassroots educators and environmentalists, and closure of locally-founded Tibetan organizations. In April this year, the Chinese authorities in Kardze (Chinese: Ganzi) Tibetan Autonomous Prefecture in Sichuan Province have issued a notification aimed at restricting the activities of non-governmental organizations (NGOs) in Kardze Prefecture. The notification issued on 26 April 2012 requires all non-governmental ‘social organizations’ to register with the prefectural-level Bureau of Civil Affairs failing which these organizations will be declared illegal, official Chinese media reported.