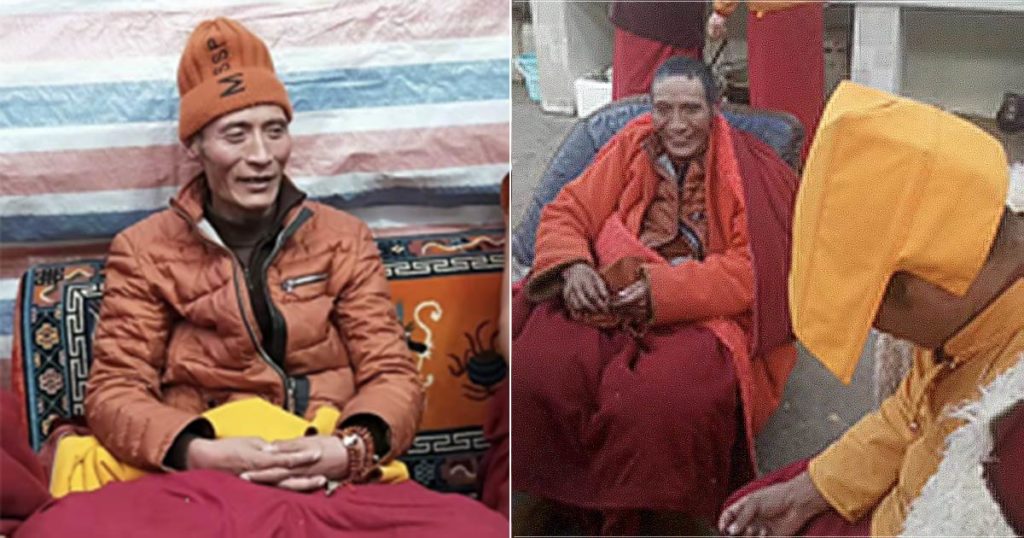 Photos of Tibetan monk Ven. Tashi Phunsok. The right image is reported to be taken when the Nalanda Monastery hosted a reception for him on his return to his homeland. Photo source: ICT

Dharamshala: A Tibetan monk named Tashi Phuntsok, an aide to the late Tulku Tenzin Delek Rinpoche, passed away early last week after prolonged illness and imprisonment. According to the International Campaign for Tibet (ICT), ven. Tashi Phuntsok breathed his last on 16 March 2020. Aides of Tashi Phuntsok reportedly told ICT that his health had been poor ever since his release from Yakra Phuk prison in July 2003.

Ven. Tashi Phuntsok was sentenced by the Chinese authorities, alongside Tulku Tenzin Delek Rinpoche in 2002, and was released early in July 2003 due to his deteriorating health.

In April 2002, Ven. Tashi Phuntsok was detained from his monastery, Jamyang Choekhorling Monastery in Nyachukha (Ch: Yajiang) in eastern Tibet after he was falsely accused of colluding with Tulku Tenzin Delek Rinpoche in trumped-up charges of involvement in a series of bomb explosions. After a sham trial, in November 2002 the Karze People’s Intermediate Court sentenced Ven. Tashi Phuntsok to seven years’ imprisonment on alleged charges of colluding with Tenzin Delek Rinpoche, while the latter, a prominent Tibetan lama and a community leader from Karze was given a suspended death sentence in December 2002 for “causing explosions” and “inciting separation of the state”.

At the time of Ven. Tashi Phuntsok’s arrest, he was reportedly suffering from tuberculosis. Owing to lack of proper medical care and ill-treatment in prison, his health deteriorated while he was serving his seven-year imprisonment. Later in July 2003, he was released prematurely from the Yakra Phuk prison near Dartsedo (Ch: Kangding), incorporated into China’s Sichuan Province, due to his deteriorating health as the Chinese authorities feared that he might die under their watch.

Except for the information that ven. Tashi Phuntsok passed away last week while being taken to hospital for treatment, no further details about his death is known at the time.