A Tibetan activist staging a nearly month long hunger strike outside the United Nations is continuing his protest from a New York hospital Tuesday.

The Tibetan Youth Congress said in a press release that Tibetan-American Dorjee Gyalpo was forced by police to seek medical care late Monday after he was unable to stand up on the 27th day of his hunger strike.  Gyalpo and two other Tibetan activists are demanding a U.N. fact-finding mission be sent to Tibet to assess the situation of human rights and freedom there. 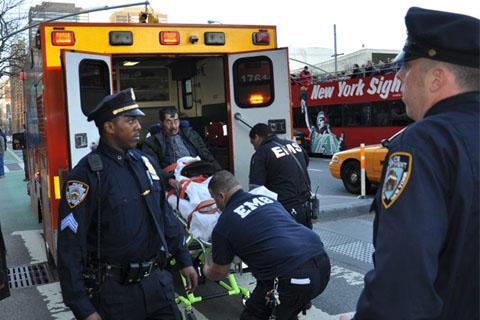 Tibetan-American Dorjee Gyalpo was forced by police to seek medical care late Monday after he was unable to stand up on the 27th day of his hunger strike. Photo: Tibetan Youth Congress

Dr. Allen Keller, who has been monitoring the protesters, tells VOA the 59-year-old activist is still refusing to eat, but is receiving intravenous fluids in the hospital.

Dr. Keller says Gyalpo is at a “particular risk” due to his age.  He says Gyalpo and the two others joining him in the hunger strike are reaching a “very dangerous” point, but are still going because they are drinking water.

“It’s rare individuals will survive beyond 60 to 90 days.  That’s when mortality really kicks in.  But for someone like Dorjee, who is older, his mortality was much higher or the risk of that.”

Gyalpo told VOA earlier this month he is willing to sacrifice his life to achieve several demands the Tibetan Youth Congress submitted in a petition to the United Nations.  The demands include the request for a fact-finding mission, pressure put on China to end what they say is undeclared martial law in Tibet, international media access and the release of all political prisoners.

The activists highlight the growing number of self-immolations over the last year in China’s Tibetan-populated areas, notably in the southwestern Sichuan province.  More than two dozen people have set themselves on fire in the region last year in protest of what they say is China’s suppression of their culture, religion and other freedoms.

Officials in Beijing have condemned self-immolations as a form of terrorism and have accused the Tibetan spiritual leader, the Dalai Lama, and the Tibetan government-in-exile of trying to undermine China’s social harmony.

The Dalai Lama has not supported the self-immolations, but he has not condemned them either.

Gyalpo told VOA Friday the Tibetan people will not give up their fight.

Psychiatrist Dr. Asher Aladjem has evaluated Gyalpo and the other hunger strikers’ mental competency and says they remain psychologically strong and fully understand the risks.

“They’re not suicidal so to speak.  It’s not that they want to kill themselves.  This is not the point.  They know that they may die as a result of the struggle.  But they are not suicidal or dangerous to themselves in this way.”

Gyalpo, a Tibetan-American activist from Minnesota, is protesting with 32-year-old Shingza Rinpoche and 39-year-old Yeshi Tenzing, who have both traveled from India.  The three men have been sitting on thin mattresses under Tibetan flags in a small park across from the United Nations since February 22.