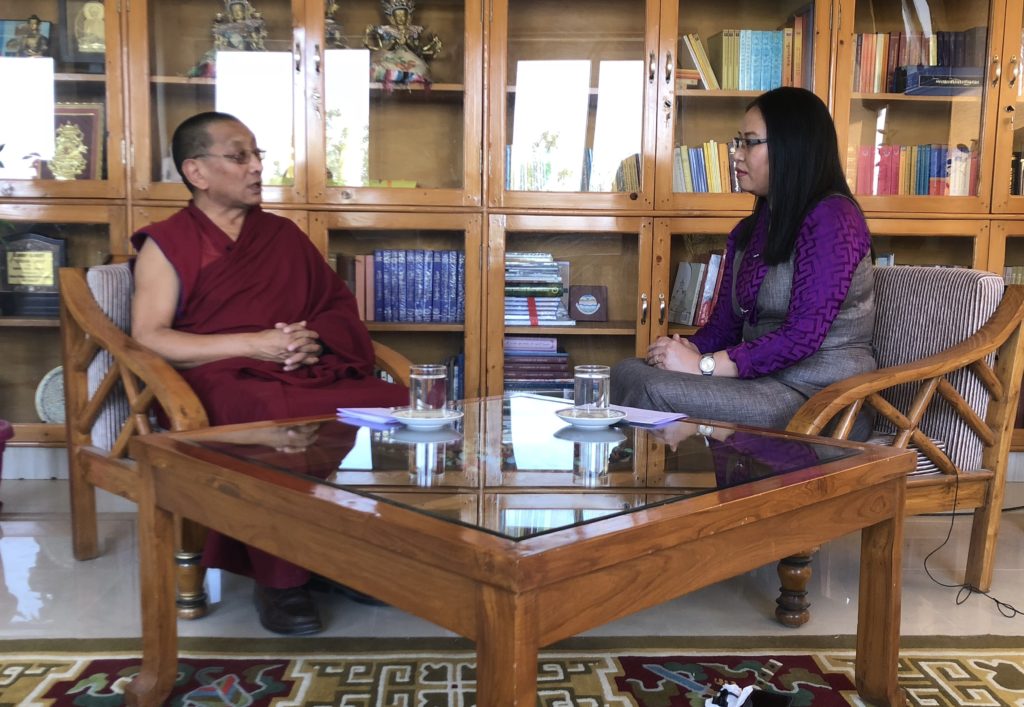 Tibet TV of Department of Information and International Relations interviewed Kalon Karma Gelek Yuthok of Department of Religion and Culture, Central Tibetan Administration, on the occasion of the second anniversary of the 15th Kashag.

Tibet TV: What are the major achievements of the Department of Religion and Culture in its 2-year tenure?

Religion and Culture Kalon: On 1 June 2016, I took office and this week, we have completed two years. Under the leadership of His Holiness the Dalai Lama, the Religion and Culture department has continued its commitment to overseeing the welfare and administration of the Tibetan monasteries and monastic institutions across India, Nepal and Bhutan. We have successfully concluded official visits to the seats of the four schools of Tibetan Buddhism and Bon Tradition. We also had series of productive meetings with the religious heads.

During the 34th Kalachakra teachings which was organised by Central Tibetan Administration, the Department had taken a major responsibility. It was a very successful teaching event. All the CTA departments shouldered various responsibilities and together made it possible.

Tibet TV: What are the important undertakings of the Department this year. The department oversees the workings of all the Tibetan monasteries in India, Nepal and Bhutan. Based on your inspection visits, what has been the assessment on the current status of these monastic institutions.

Religion and Culture Kalon: As we commemorate our 60th year in exile, we must remember that we came to exile in order to preserve our culture and traditions that were under threat at home. To this end, Tibetan monasteries across India, Nepal and Bhutan have been doing excellent work. All of us should come to appreciate and feel proud of it.

However, the Religion and Culture department is currently faced with a challenge regarding the dwindling in numbers of monastics. This is concerning because we are looking at the preservation of our rich culture and religion. However we are making every effort to inform the reality to public. We have been discussing these with members of public whenever we have the opportunity. The department is exploring appropriate means and solutions to this problems that we see ahead.

In past when monasteries had thousands of monks and nuns, they had options to choose between pursuing monastic education or opting for other responsibilities. At present, monastic education has been made mandatory for all monks and nuns. It is mandatory that the institutions have at least 80 to 90 per cent monastics in institution. This is an important implementation and monastic institutions should take their responsibility sincerely.

We are also looking at improving the facilities for the monk students, learning tools, teaching methodology and improving facilities for teachers, improved health care and most importantly, incorporating modern technology in our teaching tools. These are important initiatives that we have been considering for our monastic institutions.

If we fulfill these facilities and enable a conducive environment for Buddhist monks and nuns to study, I believe we will be successful in producing quality scholars and Buddhist masters. With that, we will able to pass the Tibetan Buddhist tradition to the future generations.

In this regard, all of us, including the Department of Religion and Culture, Tibetan monastic institutions and members of Tibetan community have to shoulder equal responsibility in supporting this initiative.

By the kindness and guidance of His Holiness the Dalai Lama, scholarship in Tibetan Buddhist institutions is truly remarkable. As per His Holiness’ guidance, many Tibetan monasteries have included modern science in the monastic curriculum. The Department has been supporting these projects too.

Under our supervision, modern classes have been introduced for young monks and nuns. They are taught the same syllabus as in Tibetan schools. We have also established hospitals with latest medical instruments to provide the best medical care for the monastics. These hospitals are also serving the local community.

Tibet TV: What are the important projects of this year?

Religion and Culture Kalon: The Department is currently providing scholarship for over 6000 monk students at institutions in various Tibetan monasteries. We also support destitute monks, nuns, and practitioners. The Department also provides salary for philosophy, language (including Chinese) and modern science teachers of smaller and financially weaker monasteries and nunneries, including institutions in Himalayan region.

Outside of monastic community, the Department also provides guidelines and finance the activities of Dharma Awareness Organizing Committees formed in various settlements. The objective is to promote learning of Tibetan Buddhist philosophy and science in Tibetan community.

In collaboration with Gyudmed Monastery in Hunsur, the Department is organising a six-month intensive course on Buddhist philosophy and language for Tibetan college students. Every year, we are receiving active participation from students in the program. We also organise yearly visits and short Buddhist introductory teachings for college students in cities across India.

Tibet TV: In the next three years, what new initiatives are you going to undertake?

Religion and Culture Kalon: We will follow up with the projects that I have already mentioned earlier. Moreover, we are organizing a major religious conference in November this year. Usually, the conference is held every two or three years. However, we were not able to hold it for some time. Spiritual heads and high lamas of the major religious schools will attend the conference for discussions and deliberations.

In the winter, there is a series of teachings by His Holiness the Dalai Lama at Bodh Gaya. And we are currently discussing if it’s possible for the Central Tibetan Administration to sponsor the teachings. If not, we will be offering our wholehearted assistance and co-operation in organizing the teachings.

Moreover, in my opinion, there is a need to review and revise the activities of the department. I will do that in consultation with the Kashag and guidance from the Tibetan Parliament. Secondly, the department of religion and culture is one of the smallest departments in the Central Tibetan Administration. However, if we think about its role concerning religion and culture, it is one of the most important. There are several reasons as to why it is one of the smallest departments in the CTA at present. Most of the monasteries are autonomous and self-reliant. It may look as if most of these monasteries doesn’t need backing and support of the department. But we cannot leave it as it is and confine ourselves to such narrow attitudes. So, we will be reviewing everything such as renovation for monasteries. In the future, whoever becomes Kalon of this department, it will be easier for him/her to carry out his/her roles and responsibilities.

Tibet TV: As Kalon of the Department of Religion and Culture, do you have any special or unique experiences that you can share with us?

Religion and Culture Kalon: I don’t have anything special to share. As I said earlier, I always get this feeling of happiness and anxiousness during official tours to assess the situation of the monasteries and nunneries. I carry my responsibilities with Unity, Innovation and Self-reliance as my motto: the three guiding principles of the 14th Kashag led by Sikyong Dr Lobsang Sangay. So when I look at this department based on these three principles, it gives me a sense of great pride. In the case of Unity, the internal unity of the religious schools is of course strong and robust. The relationship between the different religious schools and the spiritual heads are also harmonious and friendly. Even the attitude of an ordinary monk toward his peers from other religious schools have transformed tremendously. If we talk about innovation, schools in monasteries now teach both English and Hindi. In some monasteries and nunneries, there are declining number of Tibetan monks and nuns. So, these monasteries have devised syllabuses based on the monks’ own preferences by building a school and operating exactly like a normal school. For the sustenance of Tibetan religion and culture, such innovation has been quite beneficial. In terms of self-reliance, Tibetan monasteries are one of the most self-reliant organisations in the exile community. As Sikyong Dr Lobsang Sangay have said on numerous occasions, monasteries are one of the pillars of the Tibetan movement. Even in terms of aid, the CTA needs to do only little. The rest is procured by them as they have done since long time back. However, it is still not sufficient to say that they don’t need our support. Their present situation is an achievement that they can take pride in but to continue to be self-reliant, I think, we have to offer our full support and backing.

We also need to reduce the gap between what we call religion and culture, and the general public. We try to bring the knowledge available in religion and culture to the general public through introductory courses and teachings on Buddhism and such. We believe these will help the public tremendously. To say you are a Buddhist without even a basic understanding of this knowledge, it is simply anachronistic and not in accordance with His Holiness the Dalai Lama’s aspirations.

Twenty-first century Buddhism is both practical and filled with ancient wisdom. I have said it earlier, the knowledge and wisdom present in Buddhism can be interpreted as a remedy to the problems of the entire world. Even if we can’t make this knowledge available across the world, we should at least make it available to our citizens or the public. We could incorporate the use of modern technologies or mediums to bring this knowledge directly available to the general public.  Modern technology have made it easy to do it and if we can use it to bring some benefits to the public, it will be quite impactful and beneficial. Similarly, if we use these technologies in the negative direction, it will be quite destructive. But technology in itself is neutral, without any strict positive or negative aspects. How we use technology is in our own hands. So, we should use it in a positive way to stay in tune with the times to bring the benefits of religion and culture to the people. This is also what I hear from people during conferences and visits to different places.