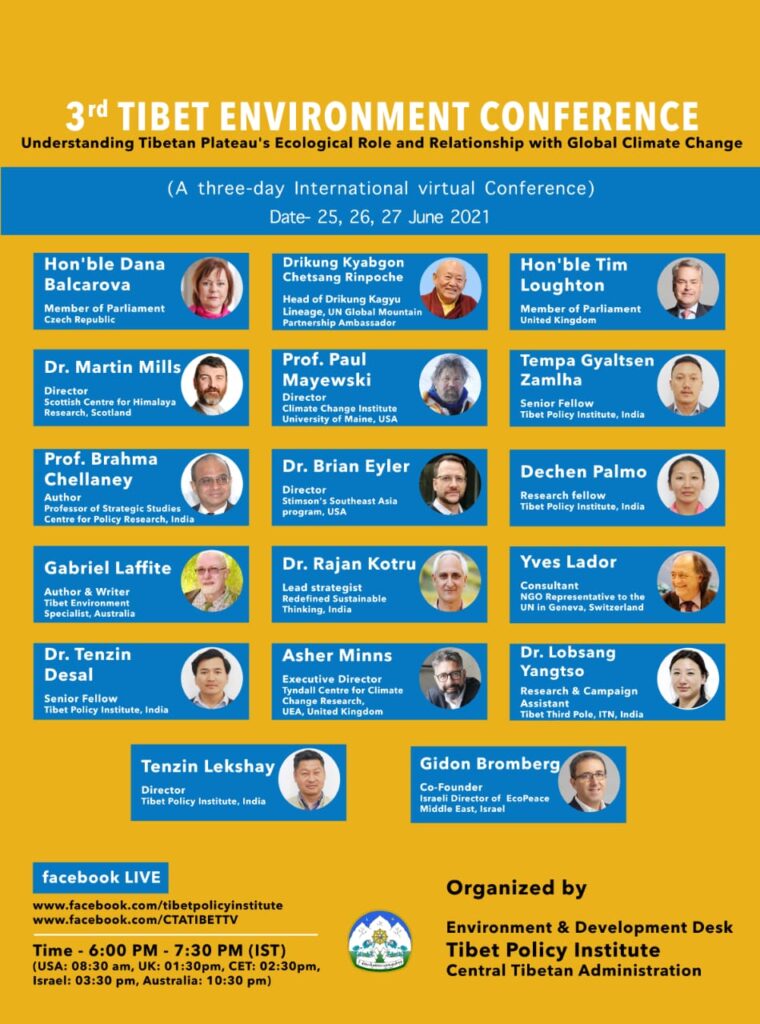 Dharamshala: The Tibet Policy Institute is organising the 3rd Tibet Environment Conference from 25 – 27 June 2021. The three-day international virtual conference will be addressed by two members of parliament from Europe, a spiritual leader and 15 prominent environmental experts from eight different countries.

The theme of the three-day panel conference is “Understanding Tibetan Plateau’s ecological role and relationship with global climate change”.

Mr. Tenzin Lekshay, the Director of Tibet Policy Institute, will open the conference with a welcome address. 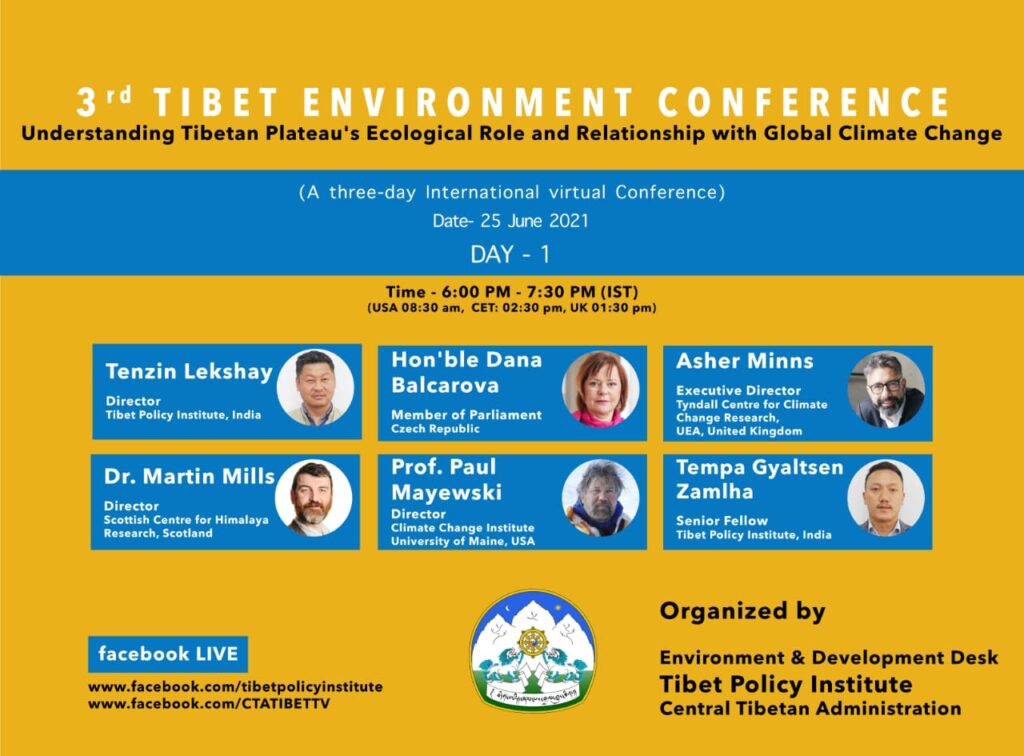 The topic for discussion on the first day of the conference is “global importance of the Tibetan Plateau and possible impacts of Climate Change in Tibet”.

The speakers on the topic include Professor Paul Mayewski (the Director & Professor of the Climate Change Institute University of Maine in USA), Dr. Martin Mills (the Senior Lecturer in Anthropology at the University of Aberdeen and Director of the Scottish Centre for Himalayan Research in Scotland), Asher Minns (the Executive Director of the Tyndall Centre for Climate Change Research at the University of East Anglia in UK), and Tempa Gyaltsen Zamlha, the Head of Environment & Development Desk as well as a Senior Fellow at the Tibet Policy Institute in India.

Tim Loughton, a Member of Parliament from the United Kingdom, will address as the honorary guest speaker on the conference’s second day. Tim Loughton was Shadow Minister for Environment from 2000, Shadow Minister for Health and Children from 2003 during the Conservative Party’s time in opposition. He recently joined the Conservation Against Racism for Equality (CARFE) as an advisory Board Member. 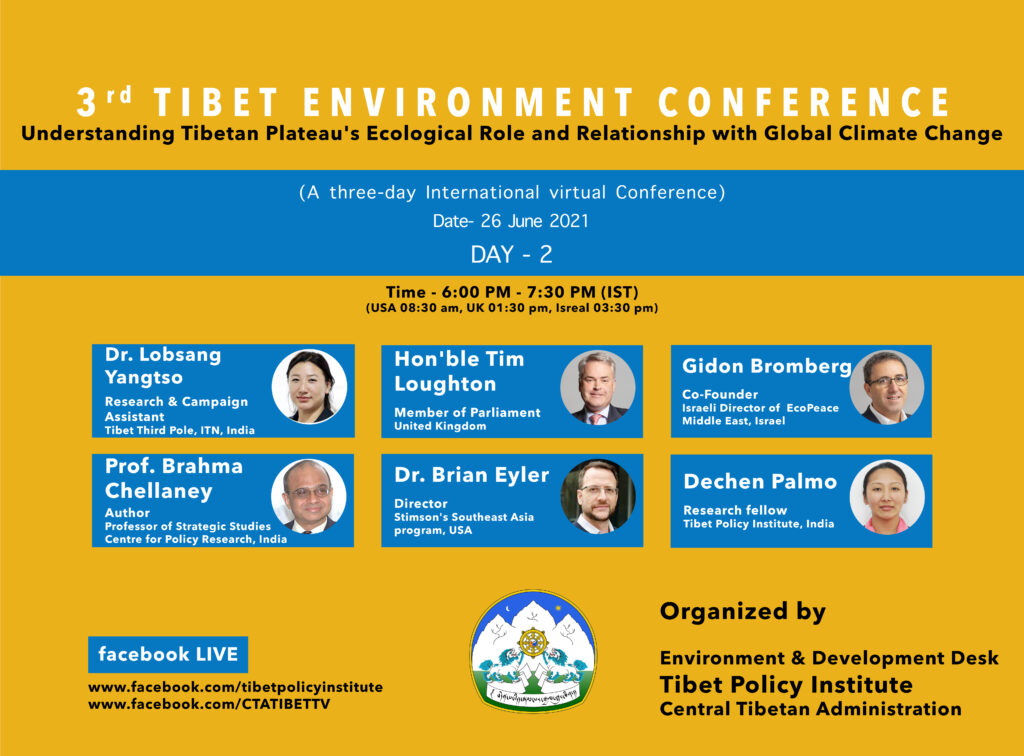 The second day of the conference will focus on ‘Trans-boundary Rivers and the state of Rivers originating from the Tibetan Plateau’ with experts including; Prof. Brahma Chellaney (Professor of Strategic Studies at the Centre for Policy Research in India), Dr. Lobsang Yangtso (Research and Campaign Assistant to Tibet Third Pole of International Tibet Network), Dr. Brian Eyler (a Senior Fellow and Director of Stimson’s Southeast Asia Program in USA), Mrs. Dechen Palmo, Research Fellow at the Tibet Policy Institute in India, and Gidon Bromberg, an International Lawyer and Israeli Director of EcoPeace Middle East.

On the third and final day of the conference, Drikung Kyabgon Chetsang Rinpoche will grace as the honorary guest speaker. Drikung Kyabgon Chetsang Rinpoche was appointed as one of the goodwill ambassador in 2015 by Mountain Partnership, a United Nations voluntary alliance, in recognising his commitment to the environment, education, historical research, and cultural preservation, as well as his pragmatic approach to sustainable development projects in the Himalayan region. 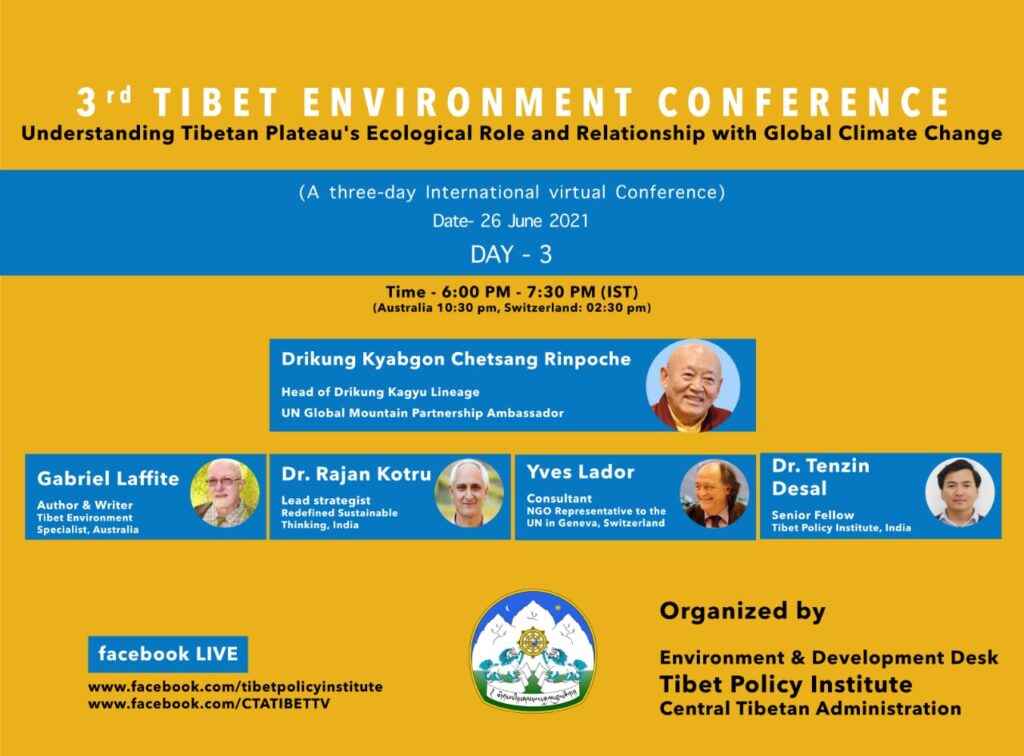 The “role of human rights in environmental conservation” will be discussed by Yves Lador (a Consultant and an NGO Representative to the UN in Geneva), Gabriel Laffitte (an author and a Tibet Environment Specialist from Australia), Rajan Kotru (the Lead Strategist at the Redefined Sustainable Thinking (REST) from India), and Dr. Tenzin Desal, Senior Research Fellow at the Tibet Policy Institute of the Central Tibetan Administration.

The Tibet Environment Conference series is organised by the Environment & Development Desk of the Tibet Policy Institute to highlight the global ecological importance of the Tibetan Plateau and the current environmental situation in Tibet.

The Conference also attempts to understand the impact of climate change in Tibet and its relationship with global climate change.
The ‘1st Tibet Environment Conference’ in 2015 and the ‘2nd Tibet Environment Conference’ in 2019 has successfully brought together a diverse group of experts to both highlight and understand Tibet’s ecological importance, particularly the importance of Tibet’s rivers.