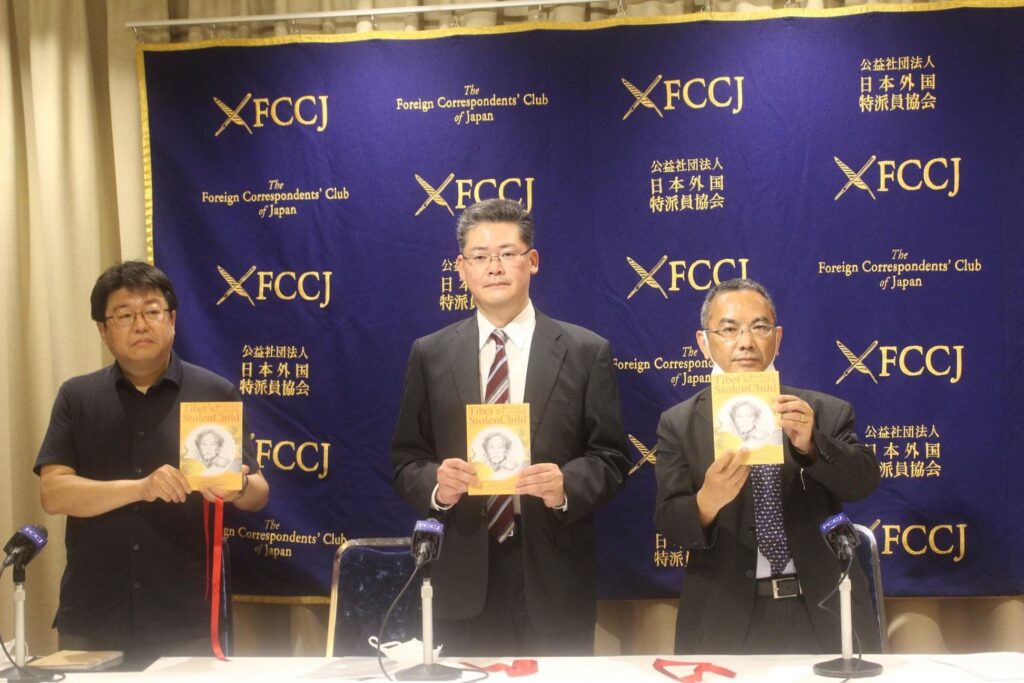 (From right) Representative Dr. Tsewang Gyalpo Arya, Dr. Satoshi Hirano of University of Tokyo and Mr. Daisuke Kitai of Amnesty International Japan release book on the 11th Panchen Lama during a press conference at the Foreign Correspondents’ Club of Japan in Tokyo on 17 May 2021.

Tokyo: Marking the 26th anniversary of the abduction of the 11th Panchen Lama Gedhun Choekyi Nyima by the Chinese government, Tibet House in Japan today released the Japanese edition of the book titled, “Tibet Stolen Child” as part of the persistent campaign of the Central Tibetan Administration (CTA) to seek global support for the release of the world’s youngest political prisoner.

Addressing the book release at the Foreign Correspondents’ Club of Japan (FCCJ) in Tokyo, Dr. Tsewang Gyalpo Arya, Representative of His Holiness the Dalai Lama for Japan and East Asia, said ‘today is a very important day for the Tibetan people and we want to send a clear message to the Chinese leadership that we and the international community have not forgotten the Panchen Lama who was kidnapped by the Chinese communist regime 26 years ago’.

Representative Dr Arya said the Chinese communist regime, which does not believe in religion and knows nothing about reincarnation,  have installed its puppet Panchen Lama Gyaltsen Norbu and forced the Tibetans to revere him, adding that Tibetans have no genuine respect for the fake Panchen Lama.

Demanding the release of the 11th Panchen Lama Gedhun Choekyi Nyima, he said the Chinese government’s kidnapping of the six-year-old Panchen Lama and keeping him and his family incommunicado for the last 26 years is gross violation of child’s rights, human rights and religious freedom of Tibetans in Tibet.

He further said countries that support democracy, human rights and the rule of law need to work together and tell the Chinese government that its repression and violation of fundamental values is wrong.

Speaking at the press conference, Dr. Satoshi Hirano, University of Tokyo, said the fact of the missing Panchen Lama shows the way of the Chinese Communist Party’s human rights violations for more than 26 years and he appealed to the international community to focus on this tragedy of the Panchen Lama. 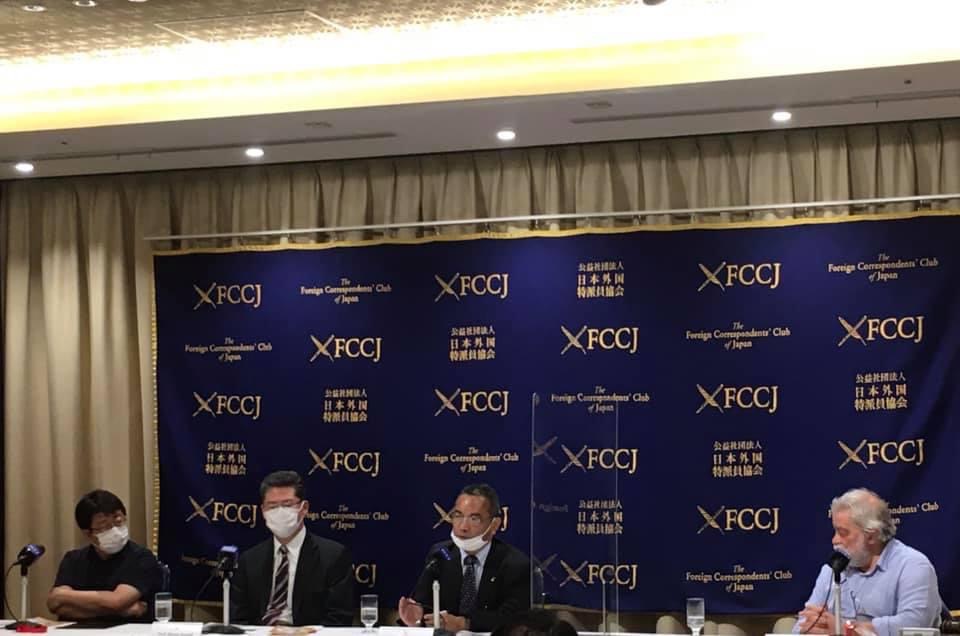 (From right) Representative Dr. Tsewang Gyalpo Arya, Dr. Satoshi Hirano of University of Tokyo and Mr. Daisuke Kitai of Amnesty International Japan release book on the 11th Panchen Lama during a press conference at the Foreign Correspondents’ Club of Japan in Tokyo on 17 May 12021.

Prof Hirano said the Chinese government’s claim to its sovereignty over Tibet based on the selection of Tibet’s reincarnated lamas using the golden urn method during the Qing dynasty is not true as the Tibetans never used this method. He emphasized the paramount importance of the finding and selection of reincarnation by the Tibetans itself.

Mr. Daisuke Kitai, Coordinator, China Team at the Amnesty International Japan, reaffirmed its demand to the Chinese government to disclose the whereabouts of the 11th Panchen Lama and his family, and free them to return to their village to live without restriction and harassment.

He said the international community cannot believe the Chinese government’s claim on the whereabouts of the 11th Panchen Lama Gedhun Choekyi Nyima unless there is independent investigation and evidence.

Mr. Daisuke spoke on the lack of accountability on the part of China concerning human rights in Tibet while expressing deep concern over the increasing restriction to access to and from inside Tibet particularly for journalists, academics and human rights, making it extremely difficult to investigate and document the human rights situation in the region.

He expressed grave concern over China’s effort to distort the mandate of the UN human rights council by promoting the so-called cooperation over accountability and opposing initiative to bring scrutiny of the serious human rights violations in countries around the world.

He said Amnesty International joined the global coalition of civil society groups calling for the urgent creation of an independent international mechanism to investigate and address the Chinese government’s human rights violations. ‘A state that tries to stay above any kind of scrutiny presents a fundamental threat to human rights. Amnesty members will continue to focus on the situation in Tibet and China, urging accountability and protecting human rights’, he said.

Mr. Shimomura Hakubun, Member of the Japanese Parliament and former education minister, issued a statement that was read out by Mrs. Fudetani Karma, executive member of the Tibetan Community Japan. 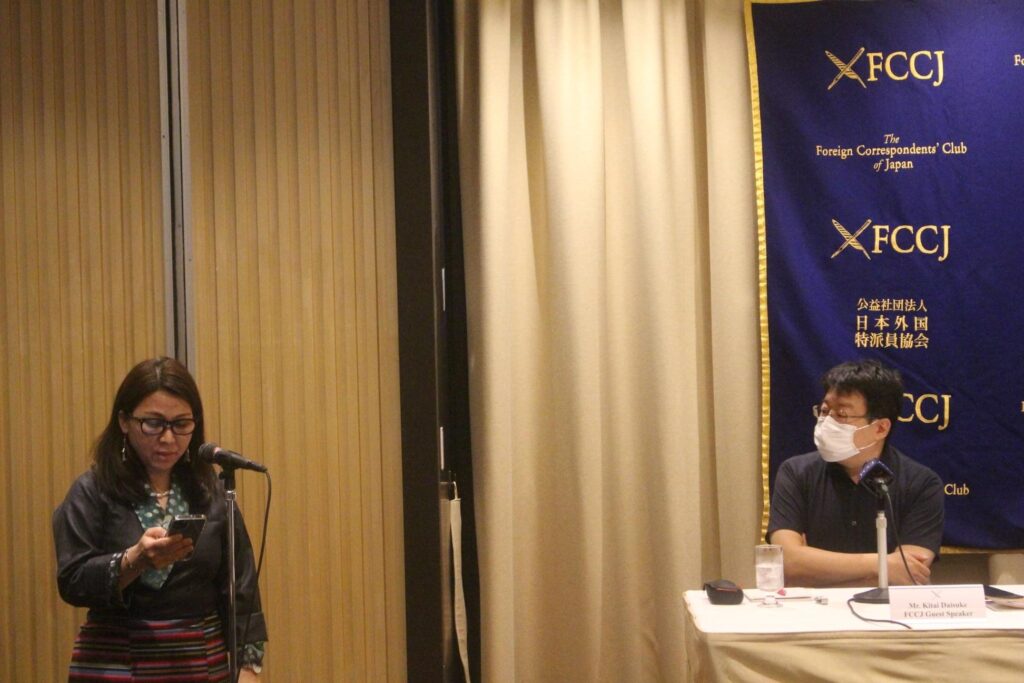 Ms. Fudetani Karma read out the statement of Mr. Shimomura Hakubun, Member of Japanese Parliament, calling for the immediate release of the 11th Panchen Lama.

In his statement, Mr. Shimomura said the Chinese government’s abduction of the Panchen Lama and keeping him in detention for the last 25 years is a serious humanitarian crisis rarely seen in the world, and that it would never be acceptable.

Condemning the Chinese Communist Party’s policies to destroy Tibetan cultural, religious and linguistic identities, Mr. Shimomura said China must announce the whereabouts of the Panchen Lama as soon as possible, and release him immediately by heeding the call of the international community.

‘The Chinese Communist Party has neither the right to select the successor of the Dalai Lama nor the Panchen Lama. No one in the world has this right except the Tibetan people. The Tibetan people, based on their Buddhist tradition, have the right to choose their religious leader and place of worship without interference from any country. The international community should firmly respect and defend such rights,’ Mr. Shimomura said.

Answering to a reporter’s question on the whereabouts of the Panchen Lama, Representative Dr Arya said if the Chinese government is serious about its claim that the Panchen Lama is doing fine then they should let us and the world know where he is and let the international community and diplomats meet him to hear from himself whether he is doing fine or not.