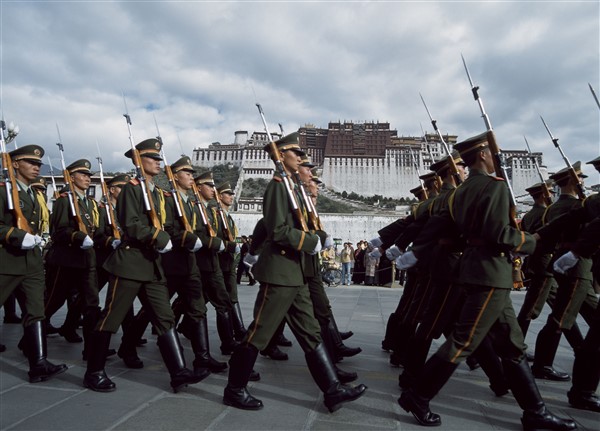 It says, “Tibet has been an inalienable part of China since ancient times. This is the precondition for anyone to talk about the Tibet question. Without it, any criticism is self-serving entertainment that can never have a correct and comprehensive understanding of what has been happening in Tibet.”1

Tibet has been an independent nation since ancient time, and it has never been a part of China anywhere in its history. It was only in 1949, that the communist China forcefully occupied Tibet, and unleashed its draconian rule in the region. If the statehood of Tibet is to be set as a precondition to talk about Tibet, then the communist regime should go hiding behind the bushes of the Great walls.

Since the time of the first King of Tibet, Nyatri Tsanpo [around 400 BCE]2, some 43 kings had ruled Tibet till the middle of 9th century CE. It was followed by Sakya Lamas, Phagdrupas, Rinpungs, Tsangpas and the Dalai Lamas till 1959, the year when China took full control over Tibet. In all these years, Tibet had maintained varied relationships of war, peace, and accommodation with its immediate neighbors: India, China, Mongolia and Nepal. How much China may want to distort, the fact is as early as 7th century, Tang Emperor Taitsung had to kowtow before the might of King Srongtsan Gampo and offer his daughter Princess Wencheng Kungchu’s hand to the Tibetan king.

In 763 CE, during the reign of King Trisrong Deutsan, Tibetan troops captured the Chinese capital Changan, present day Xian, and installed the friendly prince Chengchung as the new Emperor. During King Trirelpachen’s period, a peace treaty was concluded between Tibet and China in 821 CE in which it was proclaimed, “Tibetans shall be happy in Tibet, and Chinese in China. Both shall not intrude into other’s territory”. These events were inscribed on the stone pillars [Tib: rdo ring] erected in the Chinese city of Changan, Tibetan capital Lhasa and the border Gungu Meru. The pillars in Lhasa stand witness to these historical facts.

Later, in the 13th century, like some other countries, both Tibet and China also came under the influence of the Mongolian empire. But China was ruled directly by Mongol emperors under Yuan dynasty [1279-1368]. Tibet enjoyed great autonomy under Priest-patron [Tib: chos yon] relationship between the Mongol Emperors and the Sakya Lamas. However, Tibet later shook off the Mongolian influence in 1350, while China became free only in 1368. Therefore, the Chinese assertion that China inherited Tibet from Mongolian Yuan dynasty does not hold any ground.

During the reign of the Dalai Lamas starting from the mid 17th century, Mongol, China and Nepal influenced Tibet occasionally, but nothing amounted to the loss of Tibetan independence. When Tibet realized the “Great Game” of British and Russian Empire, His Holiness the 13th Dalai Lama declared Tibetan independence on 13th February 1913.

Chinese communist leadership and its scholars should note that no Chinese official documents prior to the founding of the People’s Republic of China show Tibet as a part of China3. Prof Han Shiang Lau, an expert on Chinese history, has in his presentations, stated that old officials documents of Ming [1368 – 1644] and Qing [1644 – 1912] dynasties have recorded Tibet as a foreign entity along with other foreign countries. “Tibet was never a part of China before 1949”4, he clarified to the large audience.

Therefore, Xu Hailin’s assertion that Tibet has been an inalienable part of China since ancient times is wrong and devoid of any historical facts.

Now, coming to the “liberation of 1 million serfs, promotion of democracy, human rights, Tibetan language” etc. by the communist regime, if these were all true, why this restriction to visit Tibet? Why Tibet is still closed? Why the increased number of security personals, army tanks, surveillance cameras, restrictions and arrests in the Tibetan areas? Why the construction of new gulags in Tibet5?

China’s Deputy Foreign Minister Le Yucheng has recently said, “Tibet enjoys stability and development, and people in Tibet enjoy [a] free and happy life,” at the UN Human Rights Council (HRC)6. If this is true why China rejected the United Nation HRC delegations’ request to visit Tibet to verify the claims?

China must answer to these ‘whys’ and convince the Tibetans and the international community of its honesty. This should, in fact, be the precondition for China before it claims of any achievement and happy life in Tibet!