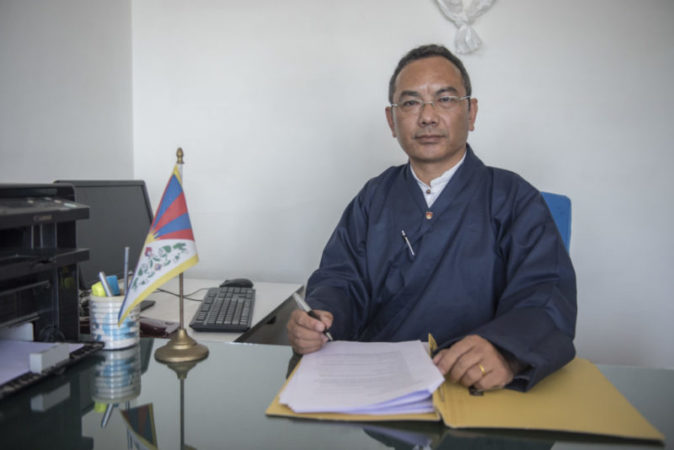 Amid the escalating U.S-China tensions, US Congressman Scott Perry has introduced a bill in the US Congress that would “authorise the President to recognise the Tibet Autonomous Region (TAR) of the People’s Republic of China as a separate, independent country.” A similar bill was also introduced for Hong Kong. The two bills have been referred to the House Committee on Foreign Affairs.

To get a deeper insight into what the bill if gets signed into law would mean for the Tibetan people, Mr Tsewang Gyalpo Arya, Information Secretary of the CTA spoke exclusively to The Kootneeti on Congressman Perry’s bill, the need to review the Tibet issue as strategic to understand and challenge China’s growing aggression in its neighbouring countries as well as over international waters and China’s unwarranted claim and interference in Tibet’s centuries-old religious traditions.

The Kootneeti is a New Delhi-based publication on International Relations & Diplomacy.

Below is the transcript of the interview:

Q: How does the Central Tibetan Administration see US lawmaker Scott Perry’s proposed legislation in the US Congress? A similar call was made by 32 US Congresspersons in 2019 who signed the Tom Lantos Human Rights Commission’s bipartisan letter to the Secretary of State in May 2019 urging the Trump administration to implement two key legislations, Tibet Policy Act of 2002 and the 2018 Reciprocal Access to Tibet Act—passed by Congress to guide United States policy on Tibet.

Tsewang Gyalpo Arya: The US lawmaker Scott Perry has proposed a bill to authorise the US president to recognise Tibet Autonomous Region (TAR) as separate from China and as an independent country. The Central Tibetan Administration (CTA) does not recognise this TAR because this includes only half of the real Tibet, mostly U-Tsang province. The autonomous region that the Tibetans are demanding comprises of three provinces of Tibet, i.e. U-Tsang, Amdo, and Kham. The CTA is demanding genuine autonomy for these three regions as one autonomous entity. This is what our delegation has submitted as per the “Memorandum on Genuine Autonomy for the Tibetan People” to the Chinese authorities in 2008.

The US government has passed the 2002 Tibet Policy Act, and the 2018 Reciprocal Access to Tibet Act and signed them into law. This has greatly helped us to promote the issue of Tibet and sustain our struggle for freedom and justice in Tibet. We are hopeful that the 2020 Tibet Policy and Support Act will also be passed and made into a law. This will strengthen the Tibetan struggle and pressure China to resolve the Tibetan issue on mutually acceptable terms.

Tsewang Gyalpo Arya: The 2018 zero budget for Tibet was later found to be due to some financial procedure. Tibet was not specifically targeted. It was later remedied and the support has since been continued. As the United States stands for democracy and human rights, we are hopeful of their continued support.

Congressman Scott Perry’s bill is the result of the international community’s support for Tibet and their realisation that Tibet was indeed an occupied country. This will definitely generate greater awareness on the Tibet issue in the US and at the international level.

Tsewang Gyalpo Arya: We have been able to make Tibet an international issue because our issue stands for truth, justice, and freedom. However, because of Chinese economic and trade offers, many countries have befriended China and the Tibetan issue has suffered to some extent. But lately, because of the coronavirus pandemic and the way the Chinese government mishandled it, the international community has come to realise how irresponsible, brutal, and insensitive the Chinese government is. They have also realised that even Chinese people are suffering under the repressive communist regime. The world has come to see the Chinese Communist Party as an impediment to international peace, development, and democracy. Hong Kong’s people eschew the Chinese rule and Taiwanese have chosen the path of democracy and freedom. This has offered great hope and opportunity for Tibet to raise its issue and the international community is beginning to understand the Tibetan aspirations. We are hopeful.

Tsewang Gyalpo Arya: Yes, definitely. The world has come to understand the real face of the Chinese communist regime. The Chinese have made aggressive moves in the South China Sea, in Japan and Taiwan seas, the Indian Ocean and the Australian harbour; have made border incursions in several places in India; have made debt traps in the developing countries, and have sent faulty medical kits abroad in this difficult time. All of this has revealed the real draconian and hegemonic intentions of China. This is all happening because China is ruled by the Communist dictatorship and not by the Chinese people. Therefore, the democratisation of China has become necessary not only for the Chinese people but for world peace and harmony. Even Chinese people have begun to show solidarity with the Tibetan people. Therefore, in this changed perception of China, we are hopeful that a solution to the Tibet issue will be found soon.

Q: Beijing has said their approval would be a “must” for the Dalai Lama’s appointment. Do you believe that when the question of reincarnation, or the future of the institution of the Dalai Lama, comes, the world would support it? How do you see this?

The Chinese communist party is an atheist and does not believe in religions. Mao has said religion is poison. But CCP claims authority to select the reincarnation of the High Lamas of Tibet including the Dalai Lama. This is contradictory, and it is a gross violation of religious freedom. The United States and the lawmakers of European Union countries have condemned this Chinese interference in Tibetan religious affairs. Besides Tibetans, China has been persecuting Christians, Falungong practitioners, and Muslims. So the international community including Chinese people’s perception of CCP is not positive.”

In meetings of the Tibetan representatives, the International Tibet Support Group, and Tibetan Religious Heads, held last years in October and November, unanimous resolutions were passed that the power to select the reincarnation of the Dalai Lama rests with the Dalai Lama and his Office only, and any interference from China shall be strongly refuted.

Therefore, China will face international wrath and condemnation if it insists on interfering in religious matters and in the reincarnation of the Dalai Lama. Tibetans and the Buddhists around the world will not accept the Dalai Lama selected by the communist atheist.