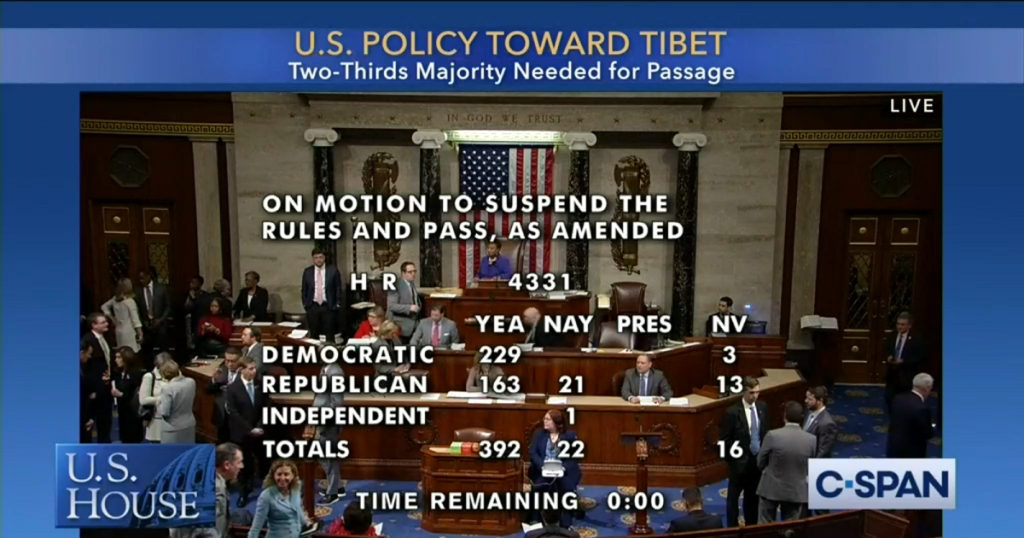 The US House of Representatives passed the Tibetan Policy and Support Act with a supermajority of 392 votes in support.

Washington DC: In yet another landmark victory for Tibetans and Tibet supporters around the world, the US House of Representatives today overwhelmingly passed the Tibetan Policy and Support Act (HR 4331), the most comprehensive policy bill on Tibet since the Tibet Policy Act- 2002.

The supermajority vote on the legislation is a landmark show of support by the US for the Central Tibetan Administration, the Middle Way Policy and genuine autonomy for Tibetans, religious freedom, environmental protection of Tibetan plateau and restoration of freedom in Tibet.

“On behalf of six million Tibetans I extend profound gratitude to the Chairs of the Congressional-Executive Commission on China and to all the co-sponsors for supporting the Tibetan Policy and Support Act,” CTA President Dr Lobsang Sangay said.

The President especially thanked Speaker Nancy Pelosi, Congressman Jim McGovern(D-Mass.), Congressman Chris Smith(R-NJ) and a longtime Tibet supporting Republican Congressman Ted Yoho who spoke strongly in support of the bill in the House as well as others.

“Thanks to everyone who have worked towards this important landmark.” The President had written to all 535 members of Congress and senators through the Office of Tibet, Washington DC to urge their support.

Speaking on the House floor earlier today, the Chairman of the Congressional-Executive Commission on China, Congressman Jim McGovern, who introduced the bill in House, stated, “The Central Tibetan Administration represents the legitimate aspirations of the Tibetan people” and recounted how China is the most prominent human rights abuser. “It should be clear that we support a positive and productive US-China relationship but it is essential that human rights of all the people of China are respected by their government.”

Congresswoman Eleanor Holmes Norton said: “The US will not cease to help Tibetan people until they get freedom”.

Congressman Ted Yoho reaffirmed that the Tibetan issue has and will continue to attract bi-partisan support, and he promoted his place to invite His Holiness the Dalai Lama to address members of Congress through a video conference.

“We are supporting the Tibetan people’s right to religious freedom and genuine autonomy by formally establishing a US policy that the Tibetan Buddhist community has the exclusive right to choose its religious leaders, including the future 15th Dalai Lama,” she said.

The bill was passed with a supermajority of 392 votes.

Built on the Tibetan Policy Act of 2002, the bill was introduced in the US House on 13 September 2019 by Rep. James McGovern (D-Mass.), chair of the Congressional-Executive Commission on China, and introduced in the Senate on 24 September by the commission’s Co-Chair Sen. Marco Rubio (R-Fla.) and Senator Ben Cardin. The bill has 35 bipartisan co-sponsors.

“This is an extremely significant and empowering day for Tibetans all over the world. We are grateful for the House of Representatives for standing up for the human rights of Tibetan people, as this is strong and clear support of truth, justice, and human rights. It also sends a strong message to the Chinese Government about the US government’s sentiments for Tibet, Tibetans, and human rights. We are confident that the bill will pass through the Senate and move to become a historic Act on Tibet”, stated Representative Ngodup Tsering.

Earlier that morning, Representative Tsering and Kelsang met with Congressman McGovern and discussed the bill. The four staff members of the Office of Tibet, including the Representative, attended the entire proceedings of the House.

The next step is to go through the Senate where there is a significant show of support for the smooth passage. After the Senate, it will be sent to President Trump to be signed and become law. Read the text of the bill.

The bill makes it official US policy that the decisions regarding the selection, education, and veneration of Tibetan Buddhist religious leaders are exclusively spiritual matters that should be made by the appropriate religious authorities within the Tibetan Buddhist tradition and in the context of the will of practitioners of Tibetan Buddhism; the wishes of the 14th Dalai Lama, including any written instructions, should play a determinative role in the selection, education, and veneration of a future 15th Dalai Lama.

With this bill, the US sends a clear message that senior officials of the Government of the People’s Republic of China who are responsible for, complicit in, or have directly or indirectly engaged in the identification or installation of a candidate chosen by China as the future 15th Dalai Lama of Tibetan Buddhism will be considered to have committed —

(1) a gross violation of internationally recognized human rights for purposes of imposing sanctions with respect to such officials under the Global Magnitsky Human Rights Accountability Act (22 U.S.C. 2656 note); and

(2) a particularly severe violation of religious freedom for purposes of applying section 212(a)(2)(G) of the Immigration and Nationality Act (8 U.S.C. 1182(a)(2)(G)) with respect to such officials.

The policy also denotes that interference by the Government of the People’s Republic of China or any other government in the process of recognizing a successor or reincarnation of the 14th Dalai Lama and any future Dalai Lamas would represent a clear violation of the fundamental religious freedoms of Tibetan Buddhists and the Tibetan people.

This bill commends the Tibetan exile communities around the world for the adoption of a system of self-governance with democratic institutions to choose their leaders; and His Holiness the 14th Dalai Lama for his decision to devolve political authority to elected leaders in accordance with democratic principles.

The bill emphasises His Holiness the Dalai Lama’s advocacy for the Middle Way Approach, ‘which seeks genuine autonomy for the six million Tibetans in Tibet’ and how His Holiness has overseen a process of democratization within the Tibetan polity, beginning in Tibet in the 1950s and continuing in exile from the 1960s to the present and to address the needs of the Tibetan people until such time as genuine autonomy in Tibet is realized, the 14th Dalai Lama devolved his political responsibilities to the elected representatives of the Tibetan people in exile in 2011.

The bill also affirmed upon the ‘free and fair’ assessment of the International Observers during the monitoring of the 2011 and 2016 elections of political leaders to serve the CTA’s parliament and as chief executive.

The bill concludes with the following suggestion: ‘as consistent with section 621(d)(3) of the Tibetan Policy Act of 2002 (22 U.S.C. 6901 note), the United States Special Coordinator for Tibetan Issues should continue to maintain close contact with the religious, cultural, and political leaders of the Tibetan people.’

The bill recognizes the key role of Tibetan plateau as it contains glaciers, rivers, grasslands, and other geographical and ecological features that are crucial for supporting vegetation growth and biodiversity, regulating water flow and supply for an estimated 1.8 billion people. The bill states that Global warming threatens the glaciers in Tibet that feed the major rivers of South and East Asia, which supply freshwater to an estimated 1.8 billion people.

The bill also found that the construction in Tibet of large hydroelectric power dams intended to be used in part to transmit power to Chinese provinces outside of Tibet, as well as other infrastructure projects, including the Sichuan-Tibet railroad, may also lead to the resettlement of thousands of Tibetans and transform the environment. And that the People’s Republic of China has already completed water transfer programs diverting billions of cubic meters of water yearly and has plans to divert more waters from the Tibetan plateau in China.

The legislation, therefore, calls the Secretary of State, in coordination with relevant agencies of the United States Government, to— pursue collaborative efforts with Chinese and international scientific institutions, as appropriate, to monitor the environment on the Tibetan Plateau, including glacial retreat, temperature rise, and carbon levels, in order to promote a greater understanding of the effects on permafrost, river flows, grasslands and desertification, and the monsoon cycle; Engage with the Government of the People’s Republic of China, the Tibetan people, and nongovernmental organizations to encourage the participation of Tibetan nomads and other Tibetan stakeholders in the development and implementation of grassland management policies, in order to utilize their indigenous experience in mitigation and stewardship of the land and to assess policies on the forced resettlement of nomads; and Encourage a regional framework on water security, or use existing frameworks, such as the Lower Mekong Initiative, to facilitate cooperative agreements among all riparian nations that would promote transparency, sharing of information, pollution regulation, and arrangements on impounding and diversion of waters that originate on the Tibetan Plateau.

To promote access to Tibet as enumerated in the Reciprocal Access to Tibet Act, 2019, the bill mandates for the establishment of US Consulate in Lhasa, Tibet. As a matter of policy, the bill calls upon the Secretary to not authorize the establishment in the United States of any additional consulate of the People’s Republic of China until such time as a United States consulate in Lhasa, Tibet, is established.

The bill further enshrines the objectives of the Special Coordinator as to— promote substantive dialogue without preconditions between the Government of the People’s Republic of China and the Dalai Lama or his representatives or democratically-elected leaders of the Tibetan community leading to a negotiated agreement on Tibet and coordinate with other governments in multilateral efforts toward this goal; Encourage the Government of the People’s Republic of China to address the aspirations of the Tibetan people with regard to their distinct historical, cultural, religious, and linguistic identity; Promote the human rights of the Tibetan people; Promote activities to preserve environment and water resources of the Tibetan plateau; Encourage sustainable development in accordance with section 616(d), cultural and historical preservation, health care, education, and environmental sustainability projects for Tibetan communities in Tibet; and Promote access to Tibet in accordance with the Reciprocal Access to Tibet Act of 2018 (Public Law 115–330).”;

-with inputs from Office of Tibet, DC