The Real Cause behind Tibet’s Garbage Crisis 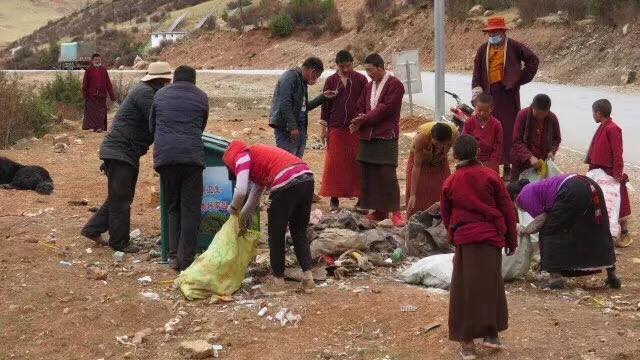 Local communities in Nangchen collect garbage left over on a roadside.

Twenty years ago, garbage was never a prevalent issue in Tibet. Domestic waste was ingeniously managed and processed into manure for farm use. But in recent years, the rampant littering on the Tibetan Plateau has become an obnoxious reality and a rapidly evolving crisis.

The waste crisis left an indelible impression on Tashi, whose 2016 visit to Tibet completely changed his childhood memory of the beautiful and garbage-free village that he grew up in. Frustrated, he lamented that Tibet is no longer the same, and there is garbage everywhere. Tashi also found that garbage had been dumped into the rivers due to the lack of basic waste-management facilities in rural areas.

The situation further presented itself as numerous writings and photos of the garbage began to emerge from Tibet. The photos highlighted construction leftovers, pilgrimage leftovers, tourist leftovers, festival leftovers and domestic dumping, contributing to the rampant littering on the mountains and in the rivers. The extent and severity of the problem has compelled different local communities in Tibet to look for solutions. Some environmental groups were formed to collect plastic waste from their surroundings.

Observing this rapidly evolving crisis, I was impelled to write an article titled ” Garbage Rampage in Tibet” in 2017, highlighting the urgent need of governance on basic waste management infrastructure and the importance of educating the general public about the health hazards of littering

The garbage situation was echoed in a recent article called “The Litter Collecting Monk of Tibet,” by Feng Hao, a researcher at the China Dialogue website. Feng wrote how plastics were found in the stomachs of livestock died inexplicably.

*Garbage problems in other mountainous regions

Littering has been a serious problem in many mountainous regions. Even beautiful Bhutan is facing grave concerns from growing volume of garbage. The situation is utterly out of control in Nepal and many mountainous regions of northern India. The enormity of the garbage problem has made various efforts in these regions seem futile. According to a report by Science Advances (19 July 2017), humans have created 6,300 million tons of plastic waste as of 2015, and if the trend continues, there will be roughly 12,000 million tons of plastic waste in the natural environment by 2050.

With rapid urbanization and a massive influx of tourists in the region, Tibet stands at a critical junction in waste management. Unless the Chinese government takes a bold and effective course of action, the world’s highest plateau could plunge into the same fate as other developing countries. There is a high possibility of the garbage problem quickly spiraling out of control.

To address the impending crisis, a clear understanding of the factors that encourage littering is essential. Feng’s article seems to insinuate that the local communities are the primary contributors to the garbage problem. Whereas, my 2017 article clearly cited three alternative primary factors that lie at the root of the problem: the lack of governance and basic infrastructure needs for waste management, the lack of public awareness programs to highlight the health hazards and environmental impact of garbage, and the lack of firm tourist regulations, which allows millions of tourists in Tibet to leave behind proportional volume of waste.

In our respective articles, Feng and I have tried to highlight a problem that could either explode out of control or could be tackled if the right measures are quickly taken. Upon careful analysis of the two articles, there are discernable parallels. Could it have been my article posted last summer that prompted Feng to travel to Tibet this summer to investigate the facts?

The absolute absence of governance on waste management in rural areas in Tibet has compelled local communities to dump or burn their domestic waste. Even the garbage collected by Environmental Groups cleaning up nearby mountains ends up being burnt. This is due to the state’s utter failure to provide very basic infrastructure to its citizens. Tsering Tsomo, who recently returned from a visit to Tibet, said there are simply no government waste-collection trucks in rural areas, and the problem is left to deteriorate.

Feng’s article also highlights the absence of waste management in many parts of Tibet. Quoting Sangay, who founded the Ganjia Environmental Volunteers Association in 2013, he states that a little more money and labour from the government to build waste sorting points in villages would make greater impacts in rural areas.

Surprisingly, Feng tries to portray the government’s inability to provide very basic waste management facilities as an ordinary issue. Quoting Peng Kui, a conservation expert with the Global Environmental Institute, Feng highlights that the lack of governance on waste management is not only restricted to rural areas, but also widely prevalent in cities and county-level towns. He states that there is simply no spare funding for waste management in townships and villages.

This is absurd. China is the world’s second largest economy which continues to grow rapidly. The Chinese government has deployed hundreds of thousands of security personals across Tibet and funds the world most expensive network of roads, known as the “Belt and Road Initiative.” Since the garbage problem in Tibet is in an early stage, only a fraction of that cost and manpower could fix it.

Feng’s interest in the waste issue in Tibet is seemingly stimulated by my earlier article. But much of his writing is presumably influenced by the tight surveillance he might have encountered while travelling in Tibet. Despite the apparent difficulty of investigating the real causes of the garbage problem in Tibet, such articles will likely alarm the Chinese government into action to protect Tibet from garbage inundation.

The vast Tibetan Plateau, standing at an average elevation of more than 4,000 meters above sea level, is not only the world’s highest plateau but is also the source of Asia’s largest rivers. Any damage done to this majestic plateau will have catastrophic repercussions for Tibet, China and the world.

Currently there is a massive public effort underway in Tibet, but a feasible solution is not possible without strong government support. 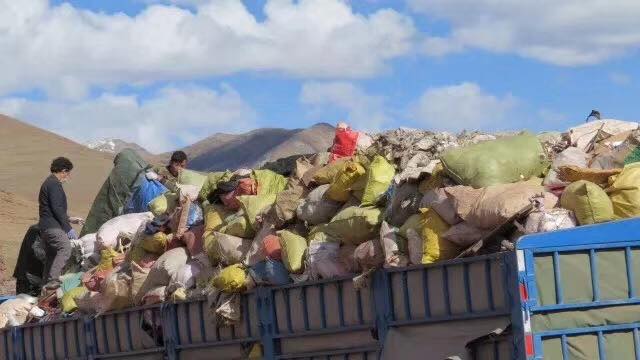 Local communities in Nangchen in Tibet loads trucks with garbage collected from nearby mountains.