The Real Beauty of a Human Being Lies in its Smile: His Holiness the 14th Dalai Lama 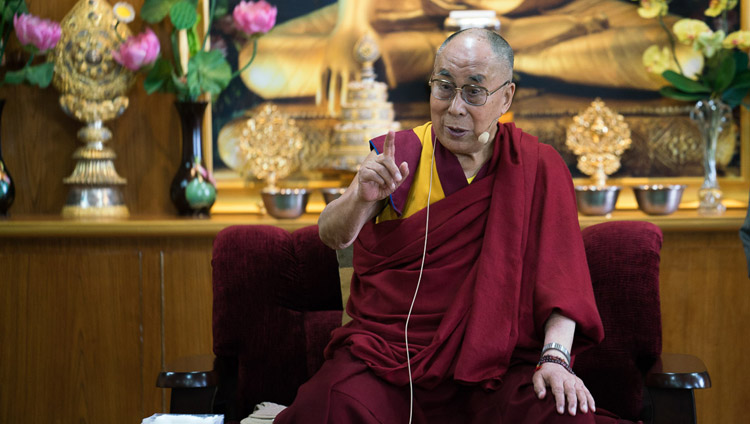 His Holiness the Dalai Lama speaking at his residence in Dharamshala, HP, India on September 6, 2017. Photo by Tenzin Choejor/OHHDL

Dharamshala: His Holiness the 14th Dalai Lama interacted with students and faculty members of University of California San Diego and a handful of attendees from Mumbai, at his residence in Tsuglagkhang, Dharamshala today.

His Holiness began his address by imparting, in brief, knowledge based on the history of Tibet. He mentioned the cultural ties shared between India and Tibet that dates back to the seventh Century.

“The seventh century Tibetan emperor married a Chinese princess but as far as culture was concerned he preferred India. In order to improve the Tibetan language and script, he copied the Devnagri script of India.”

“Later in the eighth century, Trisong Detsen, who himself was a son of a Chinese princess, wanted to introduce Buddhism on a greater scale. So he invited the then great scholar of Nalanda, Shantarakshita, who introduced Buddhism in Tibet based on the Nalanda tradition. We have been following and preserving that tradition.”

“When I first came to India after being sent to exile, I found that the Nalanda Buddhism introduced by Shantarakshita was very helpful. It teaches us on ways to promote inner strength and self-confidence. The essence of all religious traditions carry the same message, the message of love, forgiveness and tolerance. However, the Nalanda tradition teaches us how to use extensively our intelligence to promote and strengthen these inner values.”

“All these knowledge, they come from India. So spiritually speaking, India is our home. So now one of my commitments is to try to revive this ancient Indian knowledge in India. This ancient knowledge is also relevant in today’s world. Many crisis that we face is actually our own creation. Natural disasters are different. All the violence in the world today are ultimately related with emotions. Lack of peace of mind, lack of compassionate mind and lack of spiritual tolerance causes such problems. We have to ponder on how to develop our inner strength (secular ethics, moral principles). Inner warm-heartedness leads to healthier physical conditions which in turn leads to peace of mind. Too much self-centered attitude leads to fear and distrust.”

He said- “The real beauty of a human being lies in its smile, smile that expresses warm-heartedness, love and respect”. 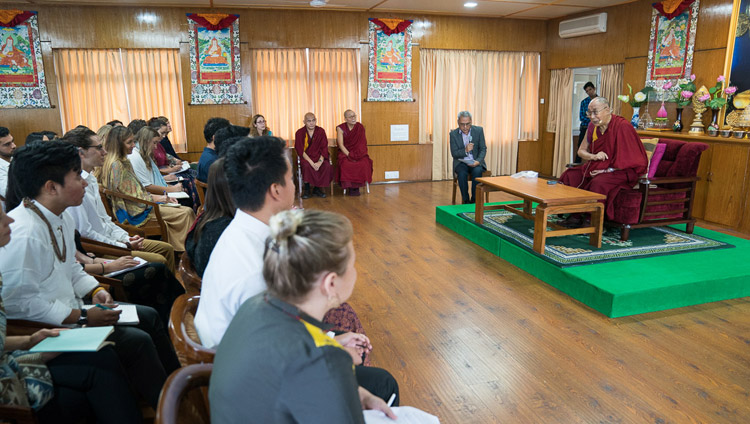 His Holiness the Dalai Lama speaking to groups from Mumbai and the University of California San Diego at his residence in Dharamshala, HP, India on September 6, 2017. Photo by Tenzin Choejor/OHHDL

“From an article that I recently read, out of seven billion human beings, one billion are non-believers. Frankly speaking, among the six billion believers, there are some who use their faith for non-violence. Therefore, according to their actions, they are in fact non-believers and not believers. It shows the lack of conviction for inner values. If there is a full conviction, then all religious traditions have the same potential to promote these deeper values.”

” According to some religious traditions, there is no previous life. This very life is created by God. So like our father, we are all children of God. God infused love. Nobody says that God is full of anger. We are children of such a wonderful God as our father. We should show more conviction, more faith to our creator which will have a positive impact in our minds that will help us in being a more compassionate and loving person.”

“Samkhya, Jainism and Buddhism, these three religious traditions of India bear no concept of God, but rather self-creation, hence there is no beginning. Everything depends on your own hands and your own actions and mental attitude. If you are compassionate and carry out compassionate acts then your future life will be happier. If you harm others you get negative consequences. That also, for some people, is very effective and powerful”.

“Therefore different religions through different philosophical ways of approach have the same goal. Love, kindness and compassion and tolerance”.

The promotion of deeper human values and love should start from education, from kindergarten level to university level, about the inner values based entirely on scientific findings, common sense and common experience. That remains one of my main commitments which I wanted to share today with you, my friends.

Nearing the conclusion to His Holiness’ address he said, “Being indifferent is being immoral.” He stated that when it comes to humanity, we as human beings must work together in achieving the goal of world peace.

After his address, His Holiness engaged himself in a question and answer session brought forward by the University students.