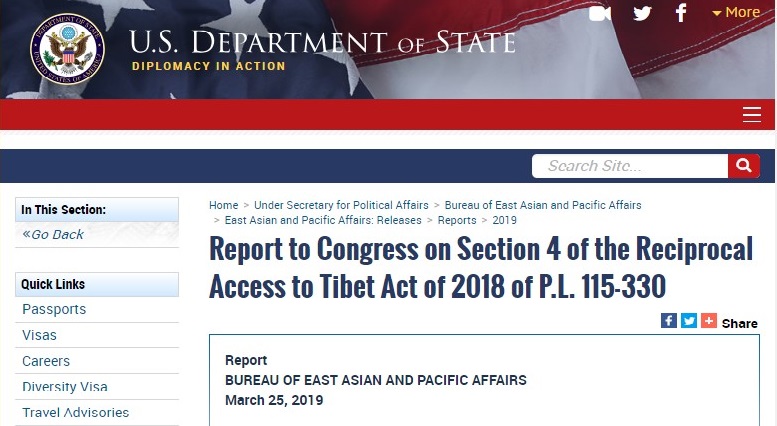 File Photo|Screengrab|Report to Congress on Section 4 of the Reciprocal Access to Tibet Act of 2018 P.L. 115-330

The Bureau of East Asian and Pacific Affairs, US Department of State has submitted its report to the US Congress under the Reciprocal Access to Tibet Act regarding “the level of access Chinese authorities granted to US diplomats and officials, journalists, and tourists” to the Tibet Autonomous Region and Tibetan areas in China in 2018. The report analyses the level of access to Tibet Autonomous Region (TAR) and Tibetan areas in comparison to other Chinese areas in 2018 while also drawing comparison to access level in 2017.

The damning report denounces the Chinese government for systematically impeding the travel of US diplomats, officials, journalists and tourists to TAR and the Tibetan areas incorporated into other Chinese provinces. The level of access to TAR is heavily regulated, restricted, controlled and regularly denied. The report also noted a disturbing development of increase in the restrictions and prohibitions in the level of access to Tibet in 2018 compared to 2017.

The report highlights that TAR remains the only area of China for which the Chinese government mandates separate prior permission to access TAR and such requests are regularly denied. Out of nine official requests for visit to TAR only four were granted, of which the majority was for routine counsellor access.

The report details various instances where the diplomats, tourists and journalists travelling within TAR and the Tibetan areas were subjected to interrogations, detentions, threats, physical blocking, restrictions, prohibitions, expulsions and conspicuous monitoring and unlawful surveillance to create an atmosphere of intimidation.

The report also brought to the fore excessive scrutiny suffered by the US citizens of Tibetan heritage applying for visas at Chinese embassies who are often denied visas. The report also detailed the infliction of self-censorship by Tibetan-Americans in a bid to obtain visas to Tibet.

The report also quotes the 2018 annual report Foreign Correspondents’ Club of China (FCCC) which stated that “Tibet proper remains off-limits to foreign journalists.” In the FCCC’s 2017 survey, 80% of the responding journalists stated that “they encountered officials and security agents who prohibited or restricted them from reporting in Tibetan areas.”

While responding to the report, Sonam Norbu Dagpo, Spokesperson of Central Tibetan Administration and Secretary of Department of Information and International Relations remarked, “We have often raised the issue of restricted access to Tibet. This US State Department report solidifies our stand with concrete instances of threats and intimidations suffered by the US diplomats, officials, journalists and tourists while traveling in Tibet. The looming question is why China is hell-bent on isolating Tibet. Is China worried about getting exposed on the deplorable human rights conditions in Tibet? Even in the free world, Tibetans living in exile are forced to inflict upon themselves self-censorship to protect their families and relatives back in Tibet. We cannot fathom how much Tibetans within Tibet under the oppressive Chinese rule must be suffering.”

The Freedom House in its Freedom in the World 2019 report has once again ranked Tibet as the second least free region in the world.