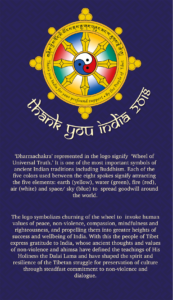 March 31, 2018 marks the beginning of the 60th year, since His Holiness the Dalai Lama stepped on the sacred land of India.

Tibet is inextricably linked to India through geography, history, culture, and spiritually, Tibetans refer to India as ‘Gyagar Phagpay Yul’ or-India the land of Aryas.’

His Holiness the Dalai Lama calls India the ‘Guru’ and Tibet its ‘Chela’ and refers to himself the ‘Son of India’ and a true follower of Mahatma Gandhi. He continues to advocate the revival of India’s ancient wisdom based on the Nalanda tradition. Today, His Holiness is the best ambassador for Indian values of non-violence, ahimsa and inter-religious harmony and the promotion of basic human values: compassion and kindness.

India has been a second home for Tibetan people and provided profound support for the Tibetan freedom struggle. CTA President Dr Losang Sangay called the Tibetan struggle ‘Made in India’ and said that ‘the success of the Tibetan struggle will be India’s success story.’
With the blessings of His Holiness the Dalai Lama and under the leadership of the Central Tibetan Administration, Tibetan people across India are observing the year 2018 with a series of Pan-India events spanning 12 months both on the physical and virtual space to publicly express gratitude to the Government and people of India, for ensuring the success of the efforts of Tibetan people: promoting its rich ancient culture and unique identity, assuring the viability and sustainability of Tibetan leadership and Tibetan communities, and leading the Tibetan struggle through steadfast commitment to non-violence and dialogue.

CALENDER OF EVENTS TO OBSERVE

March 17- March 31, 2018  60 Indian friends will begin a peace march from Chuthangmo/ Khenzimani in Arunachal Pradesh and will culminate in the marches arriving in Delhi on March 31 to symbolize 60 years since His Holiness stepped on the Indian soil.

May 29, 2018: On the 15th day of Saka Dawa (Budha’s birth, enlightenment and death) Tibetan monasteries and nunneries across India will observe an interfaith prayer meeting titled ‘Pray for India’ where Buddhist monks along with leaders of different religious tradition and faith will pray for India’s success and wellbeing of the Indian people.

Toward a Green India

June 5, 2018: On World Environment Day, Tibetans in India will engage in a mass tree plantation drive.

Toward a Healthy India

June 21, 2018: On International Yoga Day, Tibetans in India will take part in Yoga day events organized by Ministry of Ayush, Government of India.

July 6, 2018: On the occasion of the 83rd birthday of His Holiness the Dalai Lama, Tibetans across India will feed the hungry and the homeless.

Toward a Clean India

October 2, 2018: On the occasion of the observing of Swach Bharat, an initiative of the Indian Ministry of Drinking Water and Sanitation, Tibetans in India will initiate a mass cleanliness drive.

December 10, 2018: On the occasion of World Human Rights day and 29th anniversary of conferment of Noble Peace Prize on His Holiness the Dalai Lama, Tibetans across India will distribute blankets and warm clothes to the homeless.