Ten Tibetans sentenced after a sham “anti-gang” trial in Tibet 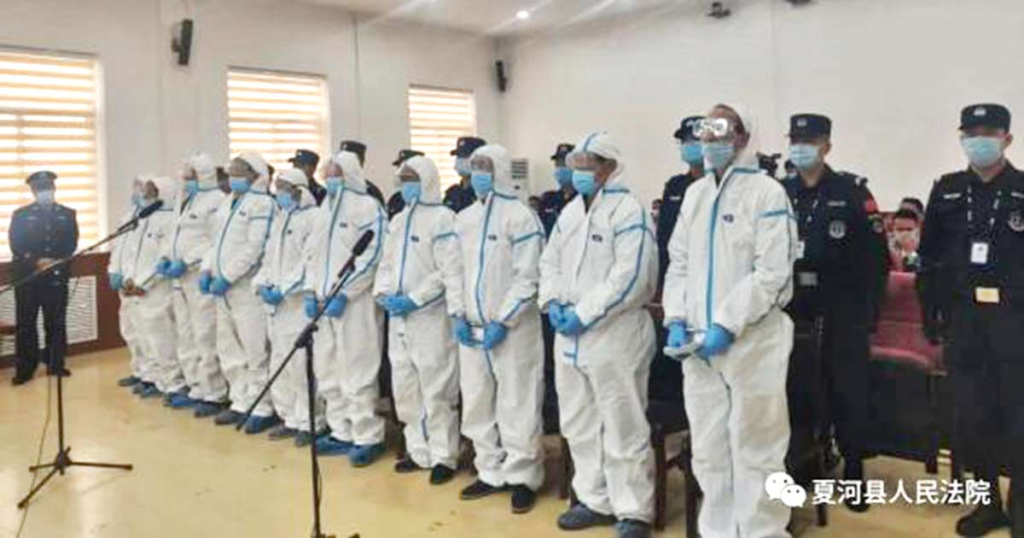 Dharamshala: The US-based The International Campaign for Tibet came out with a 28-page report “The ‘Evil’ Trial of 10 Sangchu Tibetans” exposing a sham “anti-gang” trial of ten Tibetans from Tibet’s traditional Amdo region in June this year. FreeTibet, a UK-based rights group filed a brief report on the same in July.

According to the ICT report, the ten were sentenced by a Chinese court in Kanlho with prison terms varying from 9 to 14 years for “extortion” and “forced trading”. ICT had identified the ten Tibetans as Tashi Gyatso, Nyingchak, Gyalo, Sonam Gyal, Takthar Gyal, Tsewang, Tenpa Gyatso, Tamding Dorjee, Tamding Tsering and Choepa Tsering, who were all members of a volunteer group called Namlha Monastery’s Folk Management Committee.

The report mentioned that the findings came out after analysing a rare ten-hour video recording of a two-day trial that took place on 28-29 June 2020 in the Sangchu (Ch: Xiahe) County People’s Court in Gansu province’s Kanlho (Gannan) Tibetan Autonomous Prefecture.

The report cited how China uses “anti-gang” measures to silence Tibetans and deny them free trial. It is not known for Chinese courts to hold “open court sessions” in trails relating to Tibetans, hence, it was clearly an impression of Chinese courts adhering and following the due process during the trial in which they provided opportunity for the defense counsels.

The defense attorney asserted that the ten Tibetans did not extort anyone. However, all the defenses put forward by the Tibetans were dishonoured and disregarded regardless of their merits. The defense also raised concerns about the year-long delay in charging the ten Tibetans and other procedural flaws. In the guise of due process, political punishment was rendered at the end.

Throughout the court trial proceedings, prosecutors and judges repeatedly and explicitly referred the ten Tibetans as an “evil gang”. The report finds that the ten defendants are respected Tibetan community leaders who were asking nothing but voicing for their legitimate rights. They were “requesting for compensation for the property damage from state highway projects; raising concerns about a slaughterhouse in their hometown; fundraising and procuring a piece of abandoned land for the monastery’s use”, cited the ICT report.

The report mentioned the construction of a slaughterhouse in Banggurthang township in Sangchu county in 2012. The local Tibetans were worried and voiced their concern to the slaughterhouse company. The company then provided 1 million yuan and years later the Chinese authorities distorted the facts and described the 1 million yuan as “extortion” when they put the ten Tibetans on trial.  Similar to this, the local Tibetans received compensation for damage done to their home from the Lin-He expressway construction around 2013 and during the recent trial of 10 Tibetan people the Chinese authorities projected that as evidence of extortion.

“The Chinese Communist Party always considers the grassroots Tibetan community leadership as destructive to the stability of their political power. This is one such example of how the CCP is abusing the laws by subjecting Tibetans to arbitrary arrests and unfair trials, sentencing local Tibetans leaders under different false charges to intimidate the local populace and solidify its political power at the grassroots level in Tibet,” remarked Ms Tenzin Dhadon of DIIR’s UN, EU and Human Rights Desk.

The court proceedings were broadcasted live on Gansu Court Trial Live Network and the Tibetans defendants were seen begging for leniency and expressing their ignorance of the law even though it was clear that they had not violated the law.