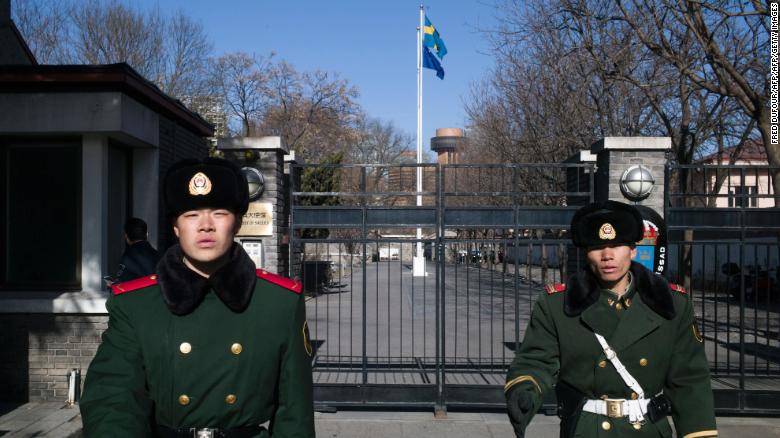 Paramilitary guards stand in front of the gates of Sweden’s embassy in Beijing. Photo/CNN

Dharamshala: A Swedish court has moved a decision to deport a Tibetan man who was convicted and sentenced to a 22-month jail term on spying for fellow Tibetans in Sweden for China.

His expulsion was appealed by Swedish security service, SAPO after the ‘Chinese agent’ completed his jail term. The security service deemed his presence “a threat to the country’s security and demanded that he should be forced to leave the country”, as reported by Göteborgs-Posten, prominent Swedish news daily.

Dorjee Gyantsan, 52-year old of Tibetan origin, was convicted of “gross illegal intelligence activity” carried out from July 2015 to February 2017, by the Sodertorn District Court on 15 June 2018. He was arrested at midnight, 26 February 2017 by SAPO.

The court judgement said that Gyantsan on several occasions traveled to Poland to meet a Chinese intelligence officer as part of a comprehensive operation to spy on Tibetans living in Sweden.

The Chinese intelligence officer reportedly received details of the Tibetan community’s political activities, meetings, trips, housing and personal relations which the court said “may have caused great damage to Tibetans both in Sweden and abroad”. Gyantsan was paid for the information he shared.

Swedish media also reported that he had received 50,000 kronor ($6,000) on at least one occasion and had his expenses paid.

“This is not the first time a Chinese spy has snooped in the community but it is the first known case of a Western government prosecuting a Tibetan accused of espionage. I hope other countries will follow Sweden’s example and take the necessary actions to deter such sinister operations by China on foreign soils,” Jamyang Chodon, former president of the Tibetan community in Sweden, and ex vice president of Swedish Tibet Committee told Tibet TV in an exclusive interview. (Watch here)

“Ostracizing the suspects and fear-mongering is the last resort. We are simply playing into China’s hands if we give in to fears and disintegration; that would eventually hamper our movement”. The former Tibetan leader had been closely following the case and have represented the community on various media platforms during the entire course of prosecution.

“Most importantly, we must remember that the real threat is the PRC government, the CCP party; It is them we need to challenge, not their paid spies,” she said. “So next time, feel free to welcome a new Tibetan into your circle if you have to, but remain alert at all times so that our movement continues unhindered.”

In what appears to be an intensifying array of China’s espionage operations, a New York City police officer was recently charged with being an “intelligence asset” for the Chinese government in its effort to suppress the Tibetan freedom movement.

The reports of China’s espionage come on the heels of the PRC government’s global effort to monitor activities of Chinese dissidents in exile as well as within China.

Beijing’s efforts aimed at co-opting members of Tibetan community are just one part of its broader intimidation campaign against Tibetans both within and outside Tibet; it also includes cyberattacks against the community, especially in Dharamshala, the capital of Tibetan diaspora. China also engages heavily through its numerous Confucius institutes and the Chinese Students and Scholars Association set up across the world to monitor voices that run contrary to the official Chinese narrative.

Sweden was the first country in Europe to close all Confucius Institutes and Classrooms across the country by May 2020.

Other countries including the US is following suit. Earlier this month, Secretary of State Mike Pompeo remarked that Chinese Confucius Institute cultural centers on US university campuses would all be shut down by year-end.