Survivors of earthquake under surveillance and uncertainty 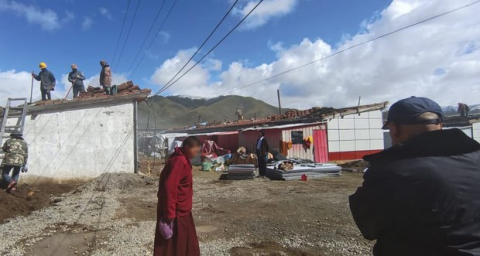 Tibetan homes torn down for reconstruction and 1216 children relocated to distant boarding schools.

Tibet Watch received reports that in early September this year, Chinese authorities in Matoe county  (Ch:Maduo, Tib:རྨ་སྟོད་རྫོང་།) of Golog Tibetan Autonomous Prefecture in the eastern Tibetan province of Amdo started demolishing Lungkya monastery (Tib:ལུང་སྐྱ་དགོན།), an unidentified nunnery and a number of Tibetan homes as part of infrastructure reconstruction following the 7.4 magnitude earthquake that happened on 22 May 2021. The demolitions are being carried out regardless of whether or not the houses were damaged by the earthquake. All the monks, nuns and residents were forced to temporarily take shelter in the newly built camps with  steel roofs.

A source from the area confided that “the demolition of Lungkya monastery and nunnery started a month ago but the authorities have still not yet given any information about when it will end and when the reconstruction would be completed. They have only told us about rebuilding a better monastery and its assembly hall.”

Explaining further on the uncertainty of their situation, the source added, “Local residents worry about how long they might remain under the steel-roof shelters. The main concern of local people is that they are uncertain if the Chinese authorities would reconstruct the monastery and Tibetan homes after everything is torn down. Many homes were neither damaged nor affected by the earthquake but the authorities forced the residents of those unaffected homes to move to the camps along with others and even proceeded with demolishing the houses.”

The local government authorities have warned local residents not to share or post any pictures, videos or updated information about the demolition and activities currently underway on social media for security reasons. Continue reading