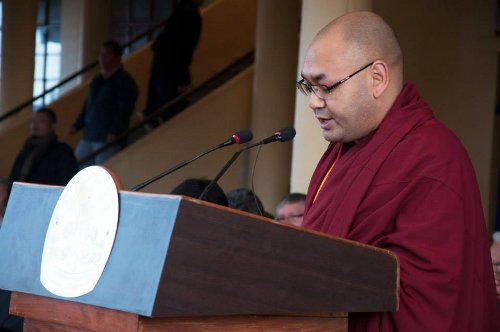 Deputy Speaker Khenpo Sonam Tenphel delivers the statement of Tibetan Parliament-in-Exile on the 24th anniversary of the conferment of the Nobel Peace Prize on His Holiness the Dalai Lama, in Dharamsala, India, on 10 December 2013/DIIR Photo

Today is the 24th anniversary of an outstandingly momentous occasion when His Holiness the Dalai Lama, the supreme protector and guide to all Tibetans in Tibet and in exile; and a champion of peace in this world, received the universally acclaimed Nobel Peace Prize. On this unique day, I, on behalf of the Tibetan Parliament in Exile, offer my greetings and congratulations with the deepest obeisance of body, speech and mind to His Holiness the Dalai Lama. His continuing deeds of unreserved generosity for the benefit of all sentient beings everywhere remain beyond anyone’s capacity to repay.

On the World Human Rights Day of 10 December 1989, when His Holiness the Dalai Lama was presented the especially renowned Nobel Peace Prize, all the Tibetan people in general, and, in particular, all people across the world who covet democracy, freedom, and peace exalted him and expressed elation, reverence and admiration for His outstanding deeds. It was therefore a unique day of perfect, joyous occasion apt for such celebrations. His Holiness the Dalai Lama has ensured the survival and preservation of the fine culture of the religiously inculcated land of Tibet which in turn has its source in the pristine ideals of the unrivalled Buddha Shakyamuni. By this means, His Holiness has guided the Tibetan people on the path of peace and non-violence in this highly degeneration afflicted world with a great commitment to turn the land of Tibet into a zone of peace. He also embarked on the great and noble deed of striving to resolve the dispute between Tibet and China on the basis of a nobly conceived, mutually beneficial middle way proposal. And on the basis of enhancing the moral ethics, which constitutes the foundation on which rests the aspiration of all living beings who desire to achieve happiness and to avoid suffering, His Holiness has striven to promote environmental protection and religious harmony, to resolve wars and disputes, and so on. For these enormous deeds of unfathomable importance which He has carried out, and continues to carry out, with a sense of universal responsibility for the purposes of helping to bring peace in this world, His Holiness the Dalai Lama has been greatly praised by all the discerning people everywhere and was honoured with the Nobel Peace Prize. He has undertaken these tasks with a sense of joy for the purposes of ensuring benefits to all sentient beings. Hence, as rightly honoured with recognition as a great champion of world peace, His Holiness continues with untiring efforts across the barriers of time and geography to carry out his secret body, speech, and mind deeds of unfathomable benefits to mankind. I therefore take this opportunity to offer countless thanks of enormous gratitude to Him.

Today is also an important day observed as the World Human Rights Day. Recently, on 22nd October, the human rights situation in China was the subject of the 17th Universal Periodic Review session of the Human Rights Council of the United Nations, which is located in the Swiss city of Geneva. At that time, representatives of a section of the member countries of the council urged China to take meaningful steps to be implemented for the purposes of improving the human rights situation in Tibet. In particular, the representatives of Canada, the Czech Republic, France, Germany, New Zealand, Switzerland, the United States, The United Kingdom, Iceland, Japan, Poland, and Australia made it clear that the human rights situation in Tibet was continuing to worsen considerably and expressed serious concerns over the development. They made emphatic criticisms over the Chinese government’s ongoing disregard for the religious and cultural rights and freedom of speech of the people of Tibet. Besides, they offered specific recommendations on the ways in which the government of China should ensure the protection of the rights of the ethnic minorities, including the Tibetan people, and urged that these be acted upon.

The government of China has thus far nothing positive to show in terms of accomplishments in the area of human rights. Besides, it is common knowledge everywhere that the government of China continues to implement a policy of an extremely brutal and merciless repression that grossly violates the human rights of the people not only in China itself but also, especially, in the ethnic minority areas such as Tibet. Nevertheless, in efforts it made recently to rejoin the Human Rights Council of the United Nations, the government of China gave undertakings to implement, all the international human rights instruments and to respect the rights of the ethnic minorities within the People’s Republic of China. It was for these assurances that China again became a member of the United Nations Human Rights Council. It is only to be expected, therefore, that China will remain true to its promises. I therefore take this opportunity to ask China to implement its promises and also urge the international community to closely scrutinize China on this issue.

The government of China routinely speaks about the importance of harmony, stability, and so on. Nevertheless, in an article titled “Ensuring the Security of Tibet’s Ideological Realm with the Spirit of Daring to Show the Sword,” which was published recently on 1st November in an official party journal as well as carried by other Chinese government publicity channels, which was in keeping with his official comments, Mr. Chen Quanguo, the Chinese Communist Party General Secretary of Tibet Autonomous Region, said: “We should thoroughly expose and criticise the Dalai Clique’s reactionary scheme of the so-called ‘Middle Way’, ‘Greater Tibet’ and ‘high degree of autonomy’. We should educate and guide cadres and ordinary people of various ethnic groups to separate Tibetan Buddhism from the fourteenth Dalai Lama, and separate the fourteenth Dalai lama from the title of the Dalai Lama so that they will consciously make a clear break from the fourteenth Dalai Lama’s clique. Their standpoint on the important political principles like the anti-separatist struggle should be thereby rendered firm and made highly consistent with standpoints of the Central Party Committee. We should try our best to enable the voices and images of the Central Party Committee to be heard and seen in the vast territory of over 1.2 million square kilometres, and prevent voices and images of hostile forces and the fourteenth Dalai Lama’s clique from being heard and seen.” However, what he has said in that article and his comments in it have absolutely no historical or factual basis. It is a futile attempt on his part to mislead the ordinary Tibetan people and to widen sense of resentment between the Tibetan and Chinese peoples. Such talks are easily vanquished by the power of truth and are not at all believed or supported by anyone. There is therefore no need for us to make a point-by-point rebuttal of his claims. As regards the relationship between His Holiness the Dalai Lama and Tibetan Buddhism, the connection between him and his Dalai Lama reincarnations, and so on, an atheist government which does not even believe in rebirth has no power to make comments and in any case cannot know how to comment. As regards the truth about His Holiness the Dalai Lama’s wondrous deeds and the closeness of the mental connection between Him and the people of Tibet, they are obvious to people across the world who have witnessed them with unbiased interest. It is therefore a futile exercise on the part of the regional communist party general secretary Mr. Chen Quanguo to burden himself with such a fruitless labour.

No matter how much efforts China makes to boost its image, trying to mislead others with lies about having liberated a million Tibetan serfs from exploitation by the three rich classes of landlords, after having occupied their land, the glaring truth remains that it has converted Tibet into a colonial dominion. It has carried out, and still implements today, a series of highly brutal and hardline policies of unimaginable political repression, ethnic and economic discrimination, and cultural and environmental destruction. As a result, most of the three traditional provinces of Tibet saw large scale peaceful protests, involving tens of thousands of Tibetans, spreading rapidly from 10 March 2008, when the demonstrations began in the capital Lhasa. In particular, since the year 2009, a total of 123 heroic men and women in Tibet have set fire even to their own precious bodies in protest against the hardline policies of the Chinese government and in the struggle for freedom for the Tibetan people. With utter selflessness and indomitable courage, they carried out their struggle with a high level of non-violent protest. However, the government of China has refused to try to understand or to carry out an impartial investigation of the causes underlying these self-immolation protests and to implement a policy which is in keeping with the tenet of seeking truth from facts. Instead, it has taken recourse to a resolute policy of deceiving people with the monetary temptations to whatever extent it can on the one hand and with a brutally violent repression through use of troops and arms on the other hand. Such behaviours show that the communist party government of China is totally backward: out of step with the rest of the world today in every respect and not in keeping with the transformations that have taken place in modern human society. There is no trace of the moral ethics, nor a slightest whiff of the virtuous traditions and culture of the great ancient Han Chinese people remaining in this government. This represents an enormous loss to the people across the world and, especially, to the entire 1.3 billion people of China today.

We have taken to heart the wishes, the well being, and the urgency of the situation in Tibet highlighted by the indomitable courage shown by the people there in protesting against the government of China, displaying selflessness in struggling for the greater Tibetan cause. Given this urgency, the Tibetan Parliament in Exile has, for the purposes of ensuring a speedy resolution of the Tibetan issue and, in particular, to address the serious hardship and critical situation being faced by the Tibetans in Tibet, initiated a campaign last year. Keeping in view the local circumstances from place to place, the Tibetan parliament in Exile has carried out that campaign to lobby support for the Tibetan cause through meetings with government leaders and parliaments, as well as with important public figures and with the general public, including in India. This remains a continuing series of campaign actions. Recently, a delegation of member of the Tibetan Parliament in Exile, led by the Speaker, toured five countries of Europe from 3 to 25 November. The delegation visited Belgium, France, Holland, Germany and the United Kingdom to especially lobby for the Tibetan cause. And we plan to carry out more such activities for the remaining term of the 15th Tibetan Parliament in Exile.

Including the government and people of India, our appeals for support for our just cause from governments, parliaments, and likewise, from the general public have received attention, sympathy, solidarity and high levels of support. And I take this opportunity to express heartfelt thanks and gratitude to them all. At the same time, I also strongly appeal to them to continue to render even greater support to us in future.

Finally, I pray that His Holiness the Dalai Lama continue live for a hundred aeons, that all His wishes be fulfilled with spontaneity, that the just cause of Tibet prevails with utmost urgency so that the Tibetans in Tibet and in exile be happily reunited.

The Tibetan Parliament in Exile