Statement of the Tibetan Parliament in Exile on Losar

Statement of the Tibetan Parliament-in-Exile (TPiE) on the occasion of the  day-long Hunger Strike by its Members and the public on the first day of the Water-Dragon Tibetan New Year on 22nd February, 2012 at the Theckchen Choling, Main Temple, Dharamsala. 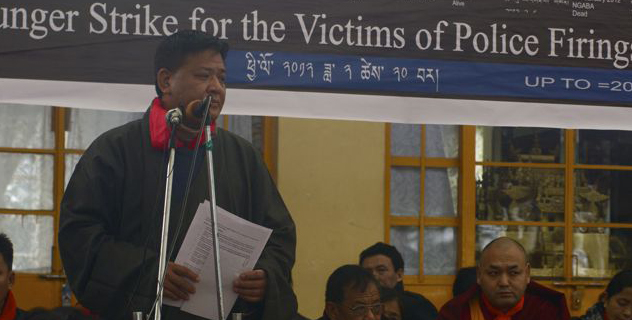 Speaker Mr. Penpa Tsering delivering the Statement of the Tibetan Parliament in Exile during the Solidarity Hunger Strike on the first day of Tibetan Losar at Tsuglhakhang, Dharamshala

Amongst the patriotic Tibetan men and women who have been committing the heroic act of self-immolations in Tibet under the two main slogans demanding “the return of His Holiness the Dalai Lama to Tibet” and “freedom and human rights for the Tibetan people”, Venerable Tapey of Kirti Monastery set the trend on 27th of February, 2009. Since then, between the 16th of March, 2011 and 19th of February, 2012, some 23 Tibetans both lay and ordained, have committed self-immolation in Tibet for the sake of Tibet and its people. Two Tibetans have done the same outside of Tibet totaling 25 so far. Fifteen of them including three nuns have lost their precious lives in the process and we have not been able to ascertain the condition and whereabouts of the rest.

We have also come to know from reliable sources that on the 23rd of January, 2012 which was the occasion of the celebration of the Chinese New Year, Tibetans in Tibet observed it as a day of mourning by holding peaceful demonstrations. But the Chinese police and the militia opened indiscriminate gun-fire on them and 4 Tibetans in Draggo, 2 in Serta and 1 in Zamthang totalling 7 were massacred. We have further come to know that on the 8th of February of this year, the same type of peaceful demonstrations had taken place in other places like Nangchen, Trindu, Zatoe, Golok, Chuchen, Chabcha etc while observing ‘White Wednesday’ which is the favourable prayer day for the long life of His Holiness The Dalai Lama. However, as the Chinese government had sealed of all internet and phone connection in most of the places in Tibet and especially those where demonstrations had taken place, we have not been able to ascertain the scale of oppression and the number of people killed, tortured or arrested. There is in effect, an unapparent military rule in Tibet at present and the Chinese government has declared an open “war” on the Tibetan people as whole.

The Tibetan Parliament-in-Exile has continuously been appealing to the Government of China and the International Community regarding the urgent situation in Tibet through its series of press statements. Recently, a special delegation of the TPiE travelled to New Delhi to brief a number of Embassies of different countries about the fast deteriorating conditions in Tibet. We also wrote an open letter to the Chinese President.

Through this statement, we once again appeal to the Government of China and the International Community as follows:

Appeal to the Chinese leaders:

1. Withdraw the large reinforcement of military to reduce tension immediately and take measures to give due consideration to the aspirations of the Tibetan people.

4. Stop sedentarization of Tibetan nomads and include Tibetan participation in environmental stewardship by using their centuries old wisdom of having lived on the Tibetan Plateau.

5. All developmental activities in Tibet must give due consideration to Tibet’s fragile environment and should accrue due benefit to the native Tibetans.

6. Release all political prisoners including Panchen Rinpoche Gedun Choekyi Nyima, just as Burma did so to create more trust between the people and the government.

7. Resume dialogue with the Tibetans with the commitment and conviction to seek a lasting solution to the Issue of Tibet, and peace and stability in the whole geo- strategic region.

Similarly to the International Community, we call upon the leaders of the free world to not only express your concern but also seek your intervention in de-escalating the prevailing dangerous situation inside Tibet and help find a lasting solution to the Issue of Tibet for a mutually beneficial agreement through dialogue.

We are confident that while engaging constructively with China, you will not refrain from voicing your concern for the values of democracy, equality, justice and basic human rights that you so very much cherish.