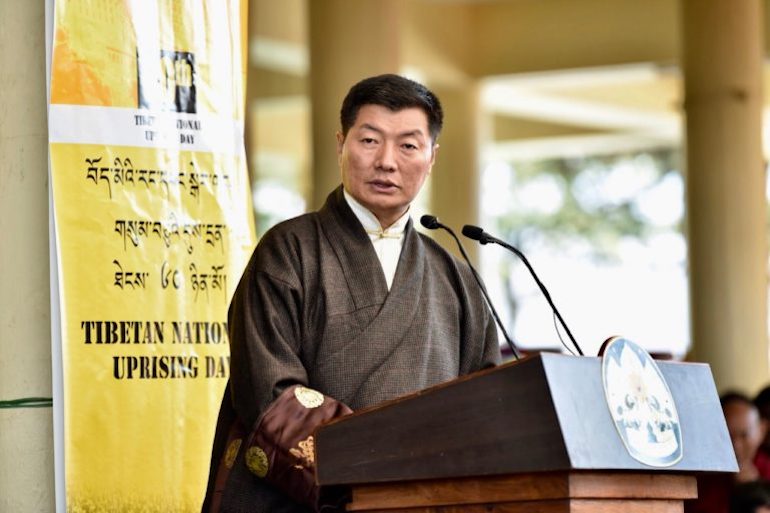 When the People’s Liberation Army (PLA) of China first marched into Tibet, they promised to build “One Road” which would bring “peace and prosperity” for the Tibetan people. However, once the Road was completed, the PLA’s tanks, guns and more soldiers came and occupied the entire Tibetan Plateau.

Sixty years ago, on this very day in 1959, the Tibetan people rose up against the occupying Chinese army. With their fists raised in the air, our brothers and sisters marched together to make it clear that the Land of Snow is a Tibetan territory. “Tibet belongs to Tibetans,” they shouted. Standing steadfast in unity, they protected and ensured the safety of our root guru, our tsawai lama, His Holiness the Great 14th Dalai Lama.

Over the last six decades, the government in Beijing has brutally repressed the Tibetan people, denied us our basic rights and has consistently pursued systematic policies to crackdown on Tibetan language, culture, unique identity, and spiritual practices. In essence, China has deliberately aimed to eradicate Tibet’s civilization from the face of this earth.

In this year’s annual report, Human Rights Watch states that the Chinese authorities have used a “nationwide anti-crime campaign to encourage people to denounce members of their communities on the slightest suspicion of sympathy” for His Holiness the Dalai Lama.

Furthermore, crackdown on human rights defenders has intensified in recent years. Language advocate Tashi Wangchuk is currently serving an arbitrary five-year jail sentence. His only crime was advocating for the Tibetan people’s cultural and linguistic rights as enshrined in the PRC’s own Constitution. Recently, China has also banned Tibetan children from attending informal language classes held at their local monasteries.

As a prelude to its ambition to control the global surveillance network, China uses Tibet as a testing ground for high-tech surveillance methods. Using a “grid system of social management,” the Communist Party strengthens its Orwellian control over both the electronic and physical surveillance of Tibet. Additionally, since 2008, road blocks and check points have increasingly dotted all major roads in urban areas as well as in remote areas of the Tibetan Plateau. Chinese authorities have assigned at least one officer for every 20 Tibetans in the so-called Tibet Autonomous Region (TAR). In a dystopian world it has created, often a son is pitted against his father, a daughter against her mother, and sibling against sibling.

Commonly known as the “Third Pole”, the Tibetan Plateau holds the world’s largest reservoir of glaciers apart from the two poles. Tibet, therefore, is the source of some of the largest rivers in Asia with over one billion people depending on these waters. Consequently, rising temperatures on the high plateau endangers the livelihood of hundreds of millions of people in Asia and also negatively amplifies global climate change. China’s deeply flawed environmental policies have already turned the Tibetan Plateau into destructive mining hubs, and the unbridled damming of rivers makes the situation even more dangerous.

The assaults on Tibet and her people have always been multi-pronged. Over two million Tibetans, particularly nomads, have been forcibly removed from their ancestral land and relocated into large-scale ghettos without any alternative opportunities to lead a dignified and traditional life.

As a resentment to these harsh and repressive policies, 153 Tibetans have self-immolated since 2009 with the most recent one committed by a 23-year-old man named Dopo on November 4, 2018. While committing self-immolation, the protestors have called to restore freedom for Tibetans and the return of His Holiness to Tibet.

Freedom House has listed Tibet as the world’s second least free region for the last four consecutive years. Likewise, Reporters Without Borders expressed “outrage over the systematic violation of press freedom” and has stated that it is harder for journalists to get access to Tibet than to North Korea.

My Tibetan brothers and sisters around the world, in spite of living through the darkest period in our history, we have stood together in unity and achieved a great many things against all odds. Our journey over the past six decades has also been that of hope, resilience, and resistance.

Beginning in the early 1950s in Eastern Tibet, each of China’s tyrannical policy has been met with resolute defiance. The Tibetan National Uprising in March 1959; brave resistance in prisons and concentration camps in the 1960s and 1970s; and the large-scale demonstrations in the 1980s have all shown that the Tibetan people have consistently and collectively fought for their rights, freedom, and justice.

In 2008, the whole world witnessed a new generation of Tibetans in a nationwide uprising against the Chinese occupation and ignited a spark of unwavering courage to assert for their identity and dignity. They declared: “Our voices will not be suppressed; our commitment will not falter.” This resolute resistance continues.

Similarly, in exile, we have not only rebuilt ourselves but also become a successful and thriving community. When our grandfathers and grandmothers first arrived in India 60 years ago, their fate was uncertain and their future unknown. But under the guidance of His Holiness the Dalai Lama, they re-established themselves. Shovel by shovel and brick by brick, they built schools, monasteries, nunneries, and settlements. Families formed communities to sow seeds of hope in their corn fields. Men and women renewed their skills to weave carpets and pave a better future for their children.

Through these institutions and communities, we have managed to restore and revive our language, culture and most importantly, our identity. The depth of our history, traditions, spirituality and determination enabled us to transform our narrative from that of victims to survivors. The strength of our cause and our ability to efficiently implement development programmes over the decades have won us continued support and admiration from our friends, supporters, and aid groups around the globe.

Under His Holiness’ leadership, the Central Tibetan Administration (CTA) has evolved into a robust democracy in exile based on the rule of law, gender equality and universal suffrage. In 2011, His Holiness devolved his political authority to a democratically-elected leader. The CTA today represents the aspirations of Tibetans inside Tibet and Tibetans-in-exile scattered over 40 countries around the world. It oversees 71 Tibetan settlements; 276 monasteries and nunneries, 68 schools – having a literacy rate higher than many countries in South-and Southeast Asia – hospitals, clinics, and old age homes. All of these institutions and centres cater to the needs of Tibetan refugees in India, Nepal, and Bhutan. Our thirteen Offices of Tibet serve as official liaison channels in as many countries.

However, our success is not confined to our communities alone. The Tibetan freedom movement has garnered insurmountable international support with Tibet Support Groups (TSGs) in 54 different countries and 40 countries hosting Parliamentary Support Groups. Today, Japan hosts the largest All-Party Parliamentary TSG comprising of 90 members. Similarly, the Czech Parliamentary Group for Tibet is the largest in Europe with over 50 representatives from both the Chamber of Deputies and the Senate.

In 2018, some of the most powerful Member States at the UN Human Rights Council called upon China to stop the gross human rights violations in Tibet. We are both inspired and encouraged by support for Tibet from countries like Australia, Austria, Belgium, Canada, Denmark, France, Germany, Japan, New Zealand, Sweden, Switzerland, the United Kingdom, and the United States at China’s Third Cycle of Universal Periodic Review.

Just as importantly, in December last year the United States took an unprecedented step by passing the Reciprocal Access to Tibet Act. This bi-partisan law denies entry to America to Chinese officials deemed responsible for restricting American officials’ and journalists’ access to Tibet. The President of the United States further strengthened support for Tibet with the Asia Reassurance Initiative Act, which secures special economic support to promote and preserve Tibetan culture, education, and environmental conservation as well as sustainable development.

We are aware that the Chinese government pays only lip service to words like “co-operation” and “dialogue”. If indeed it earnestly believes that “co-operation can bring world peace,” it should renew its dialogues with the envoys of His Holiness the Dalai Lama. As we have stated repeatedly, the envoys are ready to talk and peacefully resolve the issue of Tibet through the Middle Way Approach.

Instead of looking to end the 60 years of repression in Tibet, the Chinese government has come out with a “Zero and 100 strategy.” Under this new strategy, zero news from international media and exile Tibetans will be allowed into Tibet and projects 100 percent official propaganda about Tibet to the outside world and the Tibetan community in exile. Hence, we must remain vigilant.

The Chinese government assumes that the issue of Tibet will fade with time. But our experience of over half-a-century makes us believe otherwise. The young Tibetans in Tibet experience repression and resistance, whereas, young Tibetans live in exile and learn about freedom and democracy. Together, the young generation in Tibet and in exile are determined in seeking truth and justice. This new generation of Tibetans is committed to preserving their unique identity and pursuing their dignity. They are prepared to carry forward the baton of the struggle until the Tibet issue is resolved. Ultimately, it is for the Tibetan people to decide their own destiny and that of Tibet.

To honour and offer our deep gratitude for the support we have received for the last 60 years, the Kashag dedicated 2018 as the “Year of Gratitude.” Accordingly, we began with “Thank You, India” and ended with “Thank You, America” with programmes in many other countries in between to express our profound appreciation to old and new friends of Tibet. I once again want to convey our sincere thank you to our dear friends in India and all around the world.

My friends, the tragic case of Tibet is a stark reminder of how much work is left to be done. Sixty years of the occupation of Tibet and the repression of Tibetans is far too long.

To ensure that Tibet’s freedom struggle marches forward, the Kashag today officially declares 2019 as the “Year of Commitment.” I want to call upon freedom-loving people of the world to commit to end oppression in Tibet and to commit to fight against impunity. To Tibetan people everywhere, let us continue our commitment to struggle for justice. Let us continue to strengthen our resilience so we can be united with our brothers and sisters in Tibet in freedom. Let us commit to the return of His Holiness the Great 14th Dalai Lama to the Potala Palace in Lhasa – where he rightfully belongs.