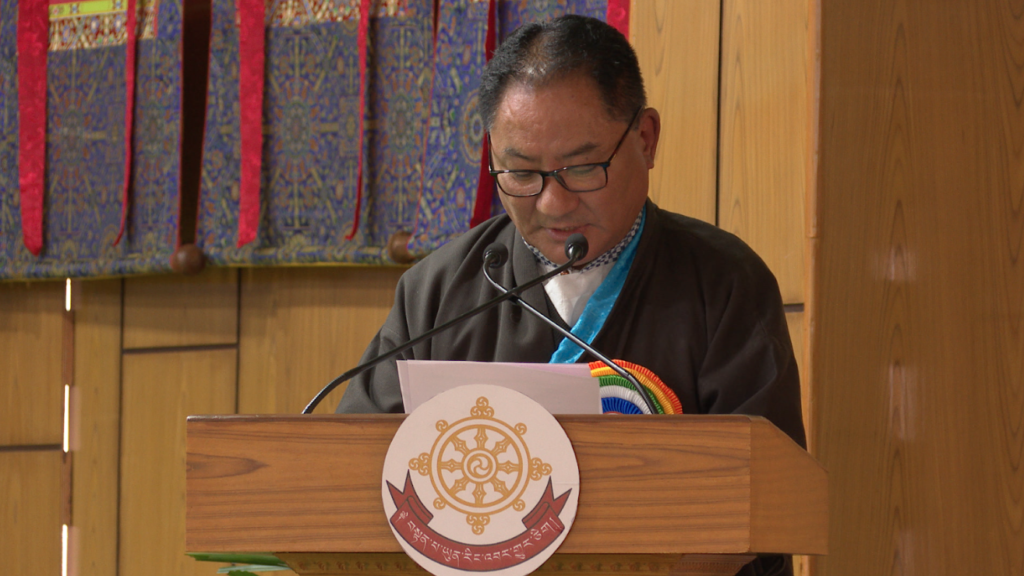 The supreme Dharma Raja of the three realms, the refuge of all beings including gods of the heavenly realm, His Holiness the Great 14th Dalai Lama, I reverently offer my homage to you through the body, speech, and mind. Today, on the 14th Religious Conference, on behalf of Tibetan Parliament-in-Exile, I respectfully extend my warm greetings to all the attendees: the Lamas and Tülkus representing their Buddhist sects, the representative of the Lamas and Tülkus from the Himalayan belt, the Honorable Minister of Religion and Cultural, and the former ministers, the Rinpoches and abbots from different monastic universities in India, the head Lopöns, the directors, and the representatives from different nunneries and monasteries.

It is only through the blessing and kindness of His Holiness the Dalai Lama that the heads and representatives of respective Buddhist sects, including the high Lamas, have been able to come together time and again. It is very fortunate that for the benefit of all the religious sects, and also for the welfare of all sentient beings, the Department of Religion and Culture has a custom of organizing such religious conference. His Holiness the Dalai Lama has always advised all the religious sects to keep their unity, and more importantly, work cooperatively. As a result, unlike any time in our history, all the religious sects, including Bon, have a very cordial relationship and mutual respect among each other. It is a matter of great joy that when it comes to the wellbeing of all sentient beings, particularly for our national cause, there is great enthusiasm and a sense of unity among all.

1. Although politically Tibet has undergone tremendous hardships, these are not unresolvable. These hardships are not merely political in nature but rather they are religious, as religious freedom being its root cause. The existence of Tibetan Buddhism lies in the collective fate of all Tibetans. With our mind endowed with the great Bodhicitta, on the one hand, we are working on political front as a cooperative cause to realize our goal, and on the other, it is extremely important that those having the title of religious heads should work for Tibet’s cause.

2. Buddhism needs to preserve by the masses and not by few learned and accomplished scholars in their remote solitary caves. Therefore, Buddhism needs to be protected, preserved, and spread by wider Tibetan masses.

3. It is impossible for youngsters to have any inclination towards Buddha Dharma if the majority of people who have been parents do not have a semblance of religious mind and fragrance. If our schools do not have considerate religious curriculum, the younger generation will face hardships. Hence, it is extremely important to teach the essence of Dharma and its fundamentals to people and especially to children in schools.

4. Since day one when we became refugees, we have given importance to the preservation of Tibetan religion, culture, and identity.

*In case of any discrepancy between this English translation and its Tibetan original, the latter should be considered as authoritative and final for all purposes.