Something there is that doesn’t love a wall

Something there is that doesn’t love a wall

CONTRARY to popular myth, the Great Wall of China is not visible from space to the naked eye. But on a large wall in a small American town, there is a politically charged painting that has somehow come into the view of officials at China’s consulate in San Francisco, more than 900km away, or ten hours by car. 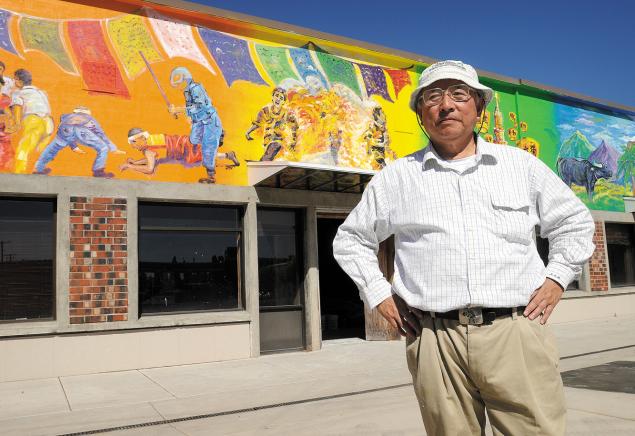 That the Chinese diplomats did not like what they saw in far off Corvallis, Oregon comes as no surprise. The mural, some 30 metres long and three metres high, carries messages in support of independence for Taiwan and greater freedom for Tibet. In vivid imagery and brash colours, it depicts one Tibetan monk burning himself to death in protest against Chinese rule and another monk being beaten by Chinese security forces.

What is surprising, however, is that these diplomats thought they could cajole city officials in Corvallis (population 54,520) into having the mural removed. They first sent a letter, dated August 8th, asking the city to “adopt effective measures to stop the activities advocating ‘Tibet independence’ and ‘Taiwan independence’ in Corvallis.”

This, the diplomats wrote, would help “avoid our precious friendship from being tainted.” They also mentioned a trade delegation set to be led by Oregon’s governor to China in mid-October, and promised to do their best to make “mutually beneficial co-operation between us” even more rewarding.

The mayor, Julie Manning, replied to the consulate by letter on August 20th, saying she had no authority to do anything about the mural. “As you are aware,” Ms Manning wrote, “the First Amendment of the United States Constitution guarantees freedom of speech in this country, and this includes freedom of artistic expression.”

Not all art will be to everyone’s personal liking, she acknowledged. “However, we as a local governmental entity do not have the right or authority to prescribe what types of art may be shown.”

Apparently unsatisfied with this answer, two San Francisco-based Chinese diplomats, Vice-Consul Zhang Hao and Deputy Consul General Song Ru’an, made the journey to Corvallis for a meeting with the mayor and another city official on September 4th. Once there, they heard more talk about the First Amendment, but nothing about anyone’s intention to do anything at all about the offending artwork.

According to Ms Manning, the diplomats did not seem surprised by what they heard. “I think at their office in San Francisco they are very familiar with the Constitution and the First Amendment, and the concept of a mural as artistic expression,” she told The Economist by telephone.

Nor did the diplomats seek a meeting with the man who commissioned the mural, a man named David Lin who was born in Taiwan. He has lived in Corvallis since 1980 and owns the building on which the mural is painted. Mr Lin, said Ms Manning, “is aware of the concerns that were expressed by our recent visitors, and he has confirmed his intent that the mural will remain.”

China usually stands firmly against any attempt by any country to “interfere in the internal affairs” of any other, and has not provided a coherent answer as to why the Chinese diplomats thought they had grounds to request help from officials in a small American town in censoring an expression that China finds objectionable.

In Beijing on Tuesday, a spokesman for the foreign ministry declined to say whether the officials at the San Francisco consulate had acted on their own initiative, or on instructions from above. But he said that Chinese diplomats have a duty to expound on China’s views and positions to the outside world. Fair enough—expounding is usually useful, especially for diplomats.

The spokesman also said China hopes the international community will not provide any platform for anyone to conduct activities in support of Tibetan or Taiwanese independence. Also understandable; hope, too, is a fine thing.

But for a country that openly proclaims a desire to expand its soft power, this kind of clumsy attempt to intervene in the artistic life of a small town like Corvallis does not look like a shrewd step.