Sikyong stresses importance of Tibet in the geopolitical context of India, China and America at CSIS virtual meet 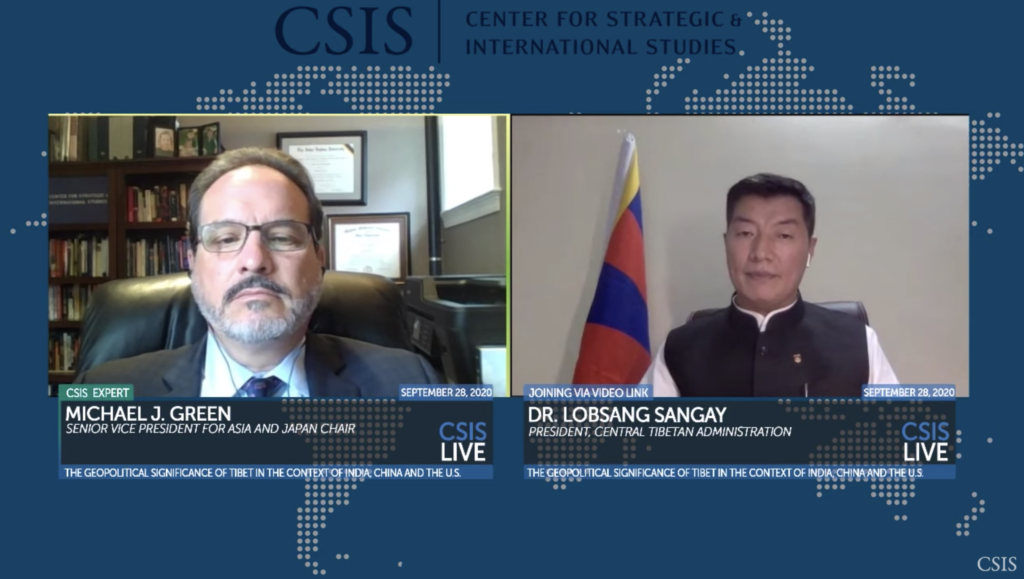 Washington, DC: The Center for Strategic and International Studies hosted Sikyong Dr. Lobsang Sangay for a virtual event this morning. The topic of today’s event is “The Geopolitical Significance of Tibet in the Context of India, China and the U.S..” Last year, CSIS hosted an event titled, “Reincarnation in Tibetan Buddhism: The Importance of Religious Freedom” with Dr. Sangay.

Dr. Mike Green, the senior vice president for Asia and Japan Chair at the CSIS and director of Asian Studies at the Edmund A. Walsh School of Foreign Service at Georgetown University, hosted and moderated the event.

After being introduced by Dr. Green, Dr. Sangay gave the keynote speech. Dr. Sangay began his speech by quoting Mao Zedong’s infamous quote, where he emphasized the need to control Tibet in order to control India; Mao is remembered saying that the Tibetan plateau is the palm, with Indian states bordering China as the fingers.

Sikyong then discussed the history of Tibet’s history with the United States. Dr. Sangay traced Tibet’s history with former US presidents, notably when President Eisenhower tracked the movement of His Holiness the Dalai Lama’s passage through the Himalayas when escaping Tibet for asylum in India. Sikyong then urged a more practical approach of competition with China rather than easy cooperation, given China’s ideological differences with the West and disregard for human rights. He said Kissinger’s policy of abandoning Tibet for China’s appeasement was a grave mistake. Sikyong ended the speech by emphasizing the importance of Tibet in the geopolitical context of India.

The event then moved into a question and answer with Dr. Green. Dr. Green asked about the current sentiments of the Middle Way Approach with Tibetans and the current status of the Tibetan Policy and Support Act. Amy Lehr, the director and senior fellow of the Human Rights Initiative (HRI) at CSIS, then moderated—she asked about the ethnic policies in Tibet and how it links to other ethnic persecution for those living under China.

The recorded virtual event can be found here: https://www.csis.org/events/online-event-geopolitical-significance-tibet-context-india-china-and-us

–Filed by the Office of Tibet, Washington-DC