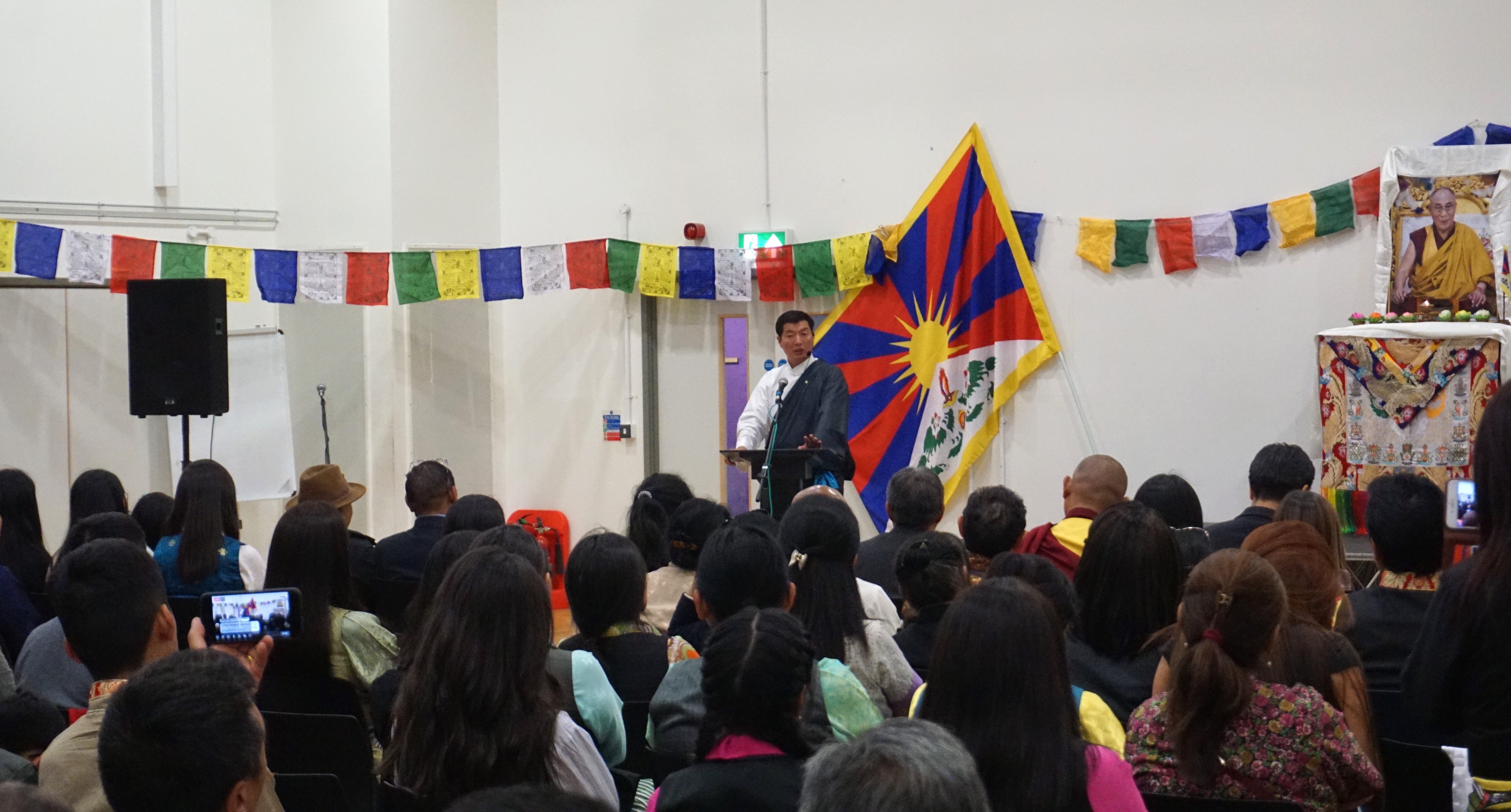 25th June 2019, Edinburgh: It was overcast and windy as Sikyong Dr Lobsang Sangay arrived late in the afternoon at Edinburgh on 24th June.

As the primary host of his visit to the UK this time, the Secretary of the Cross Party Group for Tibet in Scottish Parliament, Dr Martin Mills, welcomed the Sikyong at the dinner hosted by the Tibetan Community in Scotland.

Earlier in the evening, twelve Tibetans along with their young children hosted the Sikyong at The Balmoral where he was accorded a traditional Scottish welcome with a piper leading the Sikyong from the hotel entrance into the meeting room.

Preserving Tibetan identity including language and culture is of paramount importance, the Sikyong said to the Tibetans. He thanked them all for coming to meet with him and to hear him speak. He explained the functioning of the Central Tibetan Administration and noted some of the achievements in the field of education and community development. He took questions from the audience and replied with further information and statistics.

Over the weekend (on 22nd June) in London, the Sikyong met with the Tibetan Community in Britain (TCB) at Stratford, located in the East End of London. More than 350 Tibetans, including young children in their traditional attire, accorded traditional droso-chemar welcome to the Sikyong as he entered the auditorium.

In his address to the Tibetans in Britain, he referred to TCB Chair’s remarks about unity in the community & the member’s steadfastness and expressed his appreciation, while urging for continuity. Providing a report on the work done by the administration, the Sikyong mentioned about the progress made in the field of education over the past 8 years; tangible results in terms of providing care to the needy and elderly; restructuring of infrastructure in Gangchen Kyishong to traditional Tibetan architecture; strengthening of advocacy work around the world for the Tibetan cause with his visits abroad etc. Speaking on the Middle Way Approach, he expressed optimism that dialogue can be re-established with the Chinese authorities. Applauding the initiative of the Tibetans in Britain sponsoring the education of the Tibetan school students in exile in India, through TCB’s Tibetan Refugee Charitable Trust, he thanked the Tibetan sponsors and urged for more participation. He referred to the 5-50 Youth Forum to be held in Dharamshala in the autumn and expressed hope that several youths from England will partake in this. Explaining the advantages of sending one’s children to Tibetan weekend school, like the London School of Tibetan Language & Culture, he commended the teachers and parents for their contribution in keeping the Tibetan language and culture alive in the younger generation of Tibetan abroad. The Sikyong later took on some questions and replied to them all. Before dinner and gorshey, the Sikyong joined all Tibetans in a group photo, including one separately with the current council members of the Tibetan Community in Britain.

Taking opportunity of the Sikyong’s presence at the large gathering of Tibetans, the Representative of His Holiness the Dalai Lama at the Office of Tibet London, Mr Sonam T Frasi, who is also Chair of Tibet House Trust, requested the Sikyong to release the Silver Jubilee souvenir magazine of Tibet House Trust – which is celebrating 25thfounding anniversary this year.

Earlier the cultural group of the Tibetan Community in Britain performed a few Tibetan songs and dances, including traditional dranyen-shabdro, drawing much applaud from the Sikyong and the crowd.

Before the meeting program drew to a close, the Sikyong was invited to give away Certificates of Appreciation to five outstanding members of the Tibetan Community in Britain, selected by the public as well as by the current council members. 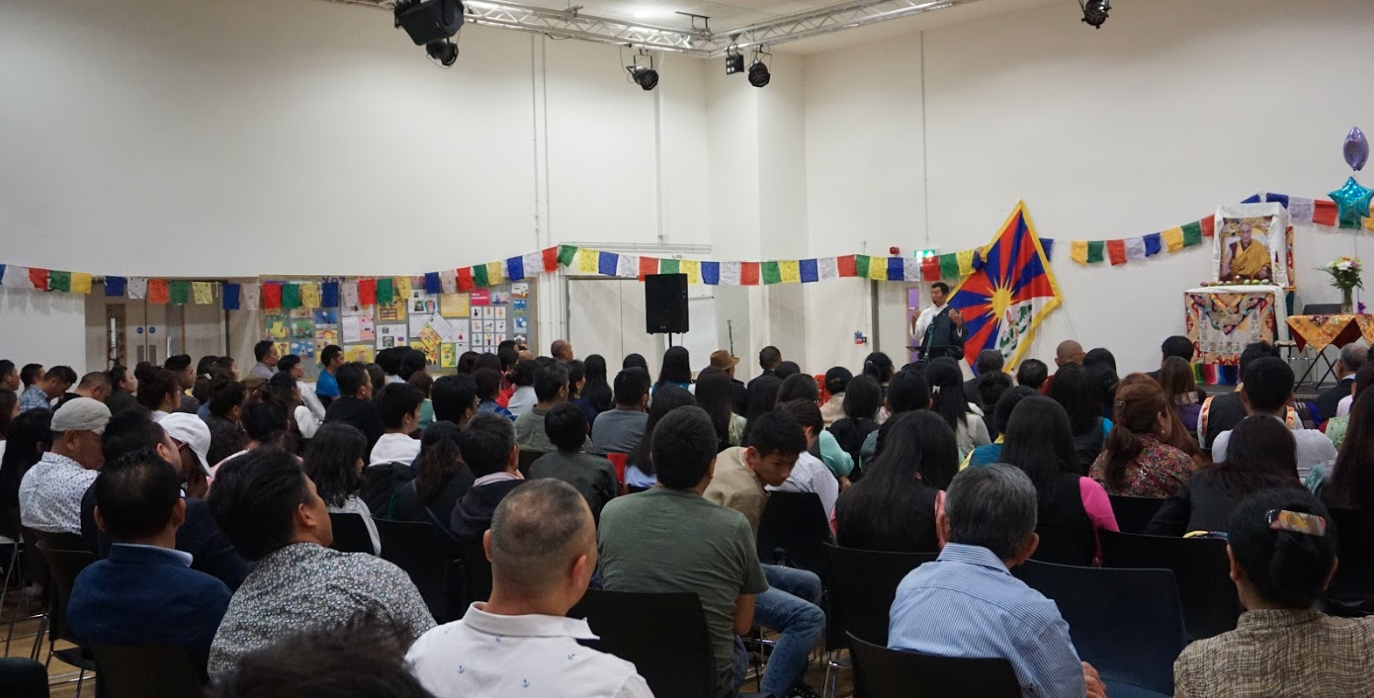 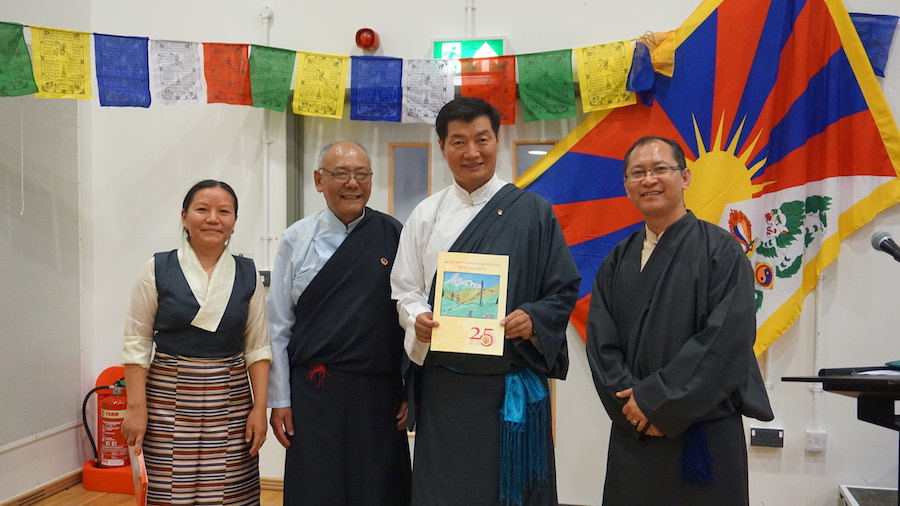 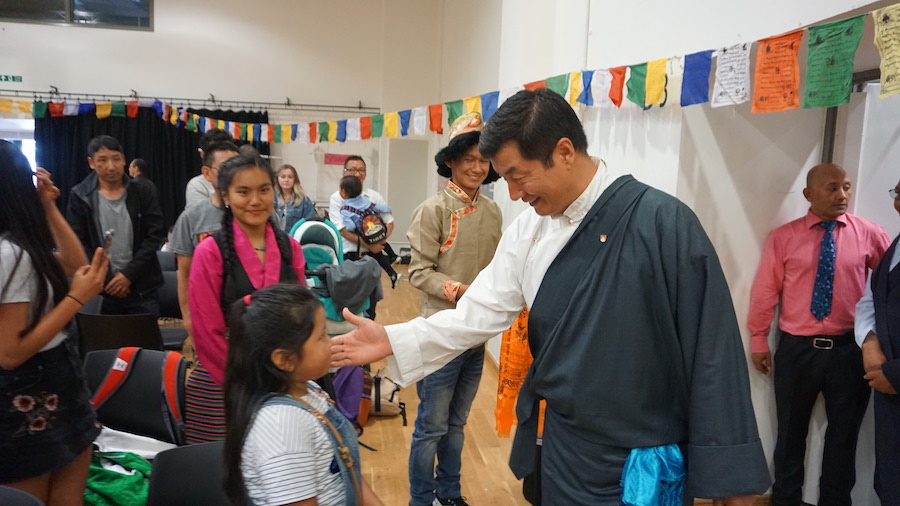 Sikyong Dr Sangay is greeted by a young Tibetan as he arrives for the meeting with the Tibetan community in Britain. 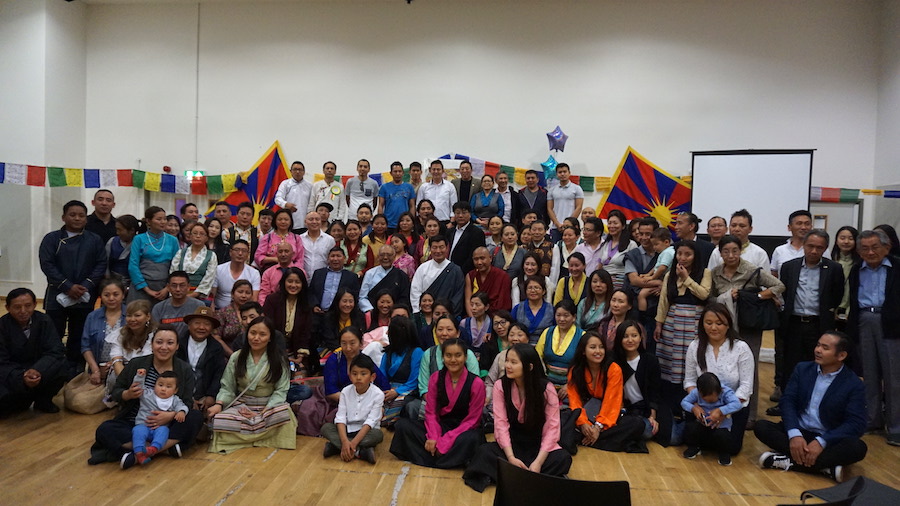 Tibetans in Edinburgh host the Sikyong at The Balmoral for a brief interaction.