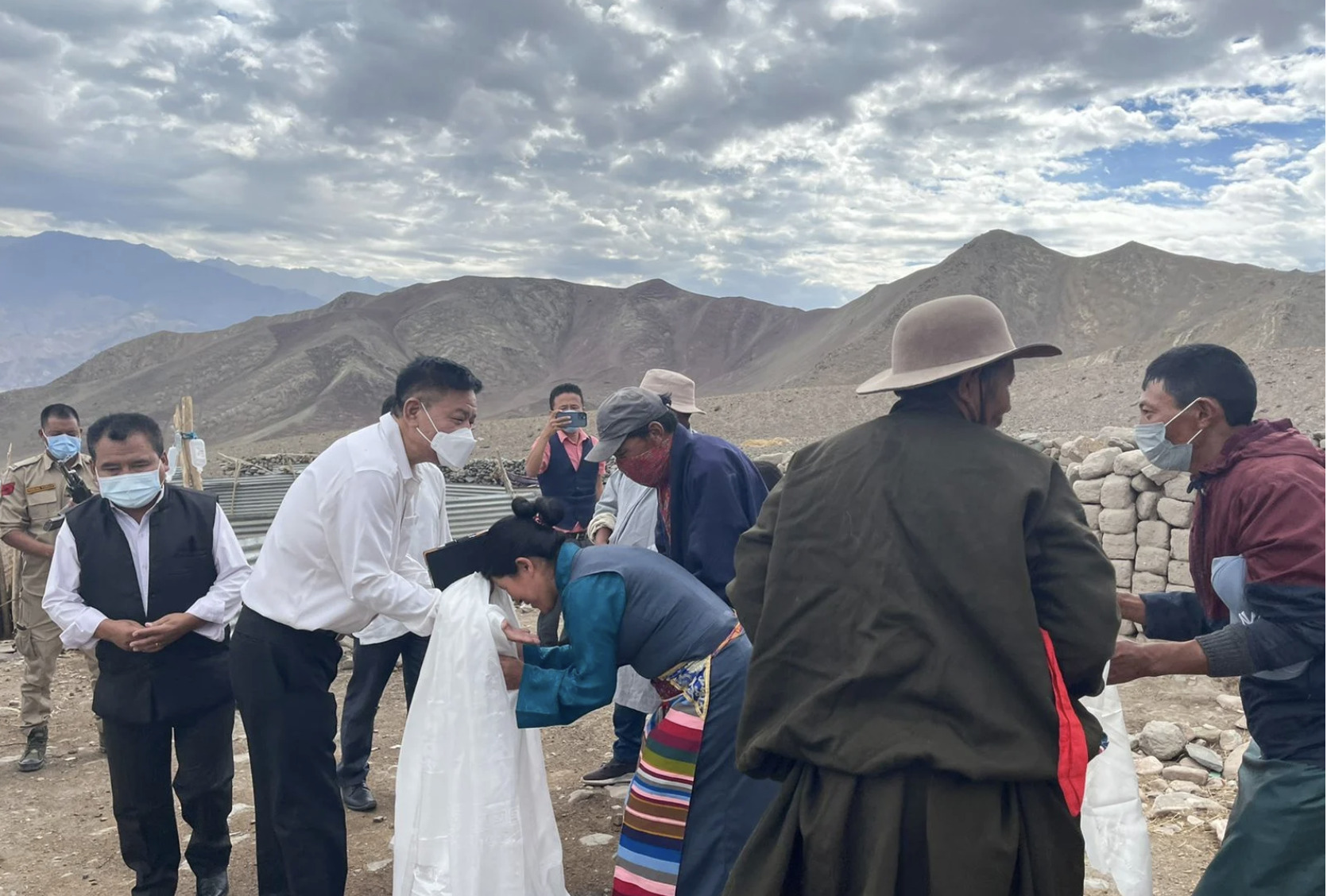 Leh: Sikyong Penpa Tsering of the Central Tibetan Administration visited Duchik nomadic settlement on the second day of his ongoing official visit to Ladakh on 21 August. At Duchik, Sikyong met the eight nomadic families and discussed the recent livestock epidemic that killed 1250 goats and sheep. Sikyong explained that the Tibetan public has raised funds through crowdfunding to compensate for the losses and also informed the local administration’s offer to provide medical help. Expressing his gratitude to the donors, Sikyong also advised the nomads to prepare in advance to avert such disasters in the future.

Following his visit to Duchik, Sikyong visited the Shey monastery and Thiksey monastery to offer his prayers and obeisance. He also received blessings from Thiksey Rinpoche during the visit. In the afternoon, Sikyong visited the TCV old age home to meet the elderly Tibetans residing there. Afterward, Sikyong held an informal meeting with the chief representative, local justice commissioner, manager of Co-operative society, staff of the regional Tibetan freedom movement of Leh and Jhangthang, and staff from other governmental and non-governmental organisations in Ladakh.

During the informal meeting, Sikyong expressed his long-held desire to visit Ladakh and explained that he has stated during his campaign that he would make Ladakh his first official destination if he wins the Sikyong election. He also welcomed the participants of the informal meeting to express the difficulties and challenges that they face and also asked them what the local and central government has done to resolve the difficulties. He further urged them on the importance of studying Tibetan history and the Tibetan charter.

Explaining the main objectives of his Kashag, he said he has three main goals as Sikyong namely the resumption of Sino-Tibetan dialogue to resolve the Tibet issue based on the mutually beneficial Middle Way Approach envisioned by His Holiness the Dalai Lama, looking after the welfare of Tibetans in exile by strengthening the bond between the Tibetan public and Central Tibetan Administration, and finally reinforcing the Tibet cause on the global stage by meeting world leaders and diplomats.

Sikyong also advised the local Tibetan leaders to maintain productive relations with the local administration and dignitaries. He further stressed the importance of understanding the local situation before planning future projects particularly the population of the area and creating awareness about the benefits of the projects to the public.

The next day on 22 August, Sikyong visited the three monasteries and the 12 camps of Sonamling Tibetan settlement followed by visits to Makhyu and Chushul nomadic settlements. He met the family members of soldier Tenzin Nyima who passed away last year during the Sino-Indian clash. He then met destitute and elderly Tibetans and the camp leaders of Sonamling settlement. He assured the camp leaders that he will raise their grievances during his meeting with the leaders of Ladakh Hill Council and the member of Parliament from Ladakh. He also assured the CTA’s continuous assistance and support.

During the meetings, Sikyong informed the public about the tasks that he has focused on in the past two and half months since assuming the responsibility of Sikyong. He said that the two main tasks that he has focused on are the resumption of Sino-Tibetan dialogue, and looking after the welfare of the Tibetan public particularly the poor and elderly. He said that if he can achieve these two tasks, he would be fulfilling the aspirations of His Holiness the Dalai Lama. Sikyong visited the TCV branch school in Agling in the evening.

The following day on 23 August, Sikyong visited Ngari monastery and offered his prayers. At 09:15 am, Sikyong met Thupten Tsewang, former member of the Indian parliament and President of the Ladakh Buddhist Association at his residence. He was accompanied by the Chief Representative, chair of local Tibetan assembly, Director of TCV school, chairman of cooperative society, and Director of the primary healthcare center. He then visited the Ladakh Jokhang temple where a grand welcome reception was organised for the Sikyong. Following the reception, Sikyong met Jamyang Tsering Namgyal, the honorable member of Indian Parliament from Ladakh at his residence. Afterward, he met DC Shri Shrikant Balasaheb Suse at his official residence. 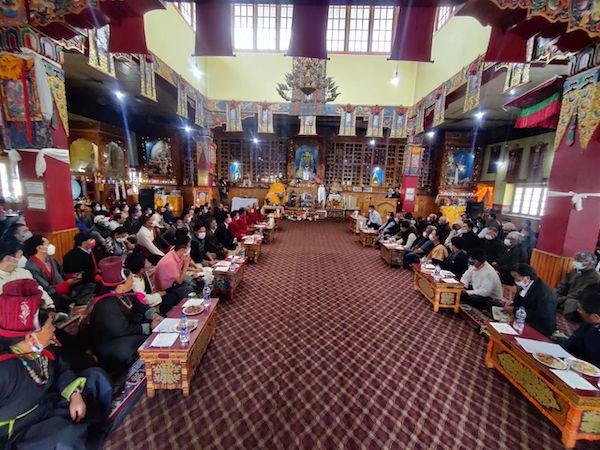 Sikyong was accorded a warm welcome reception at Ladakh Jokhang temple at Leh. 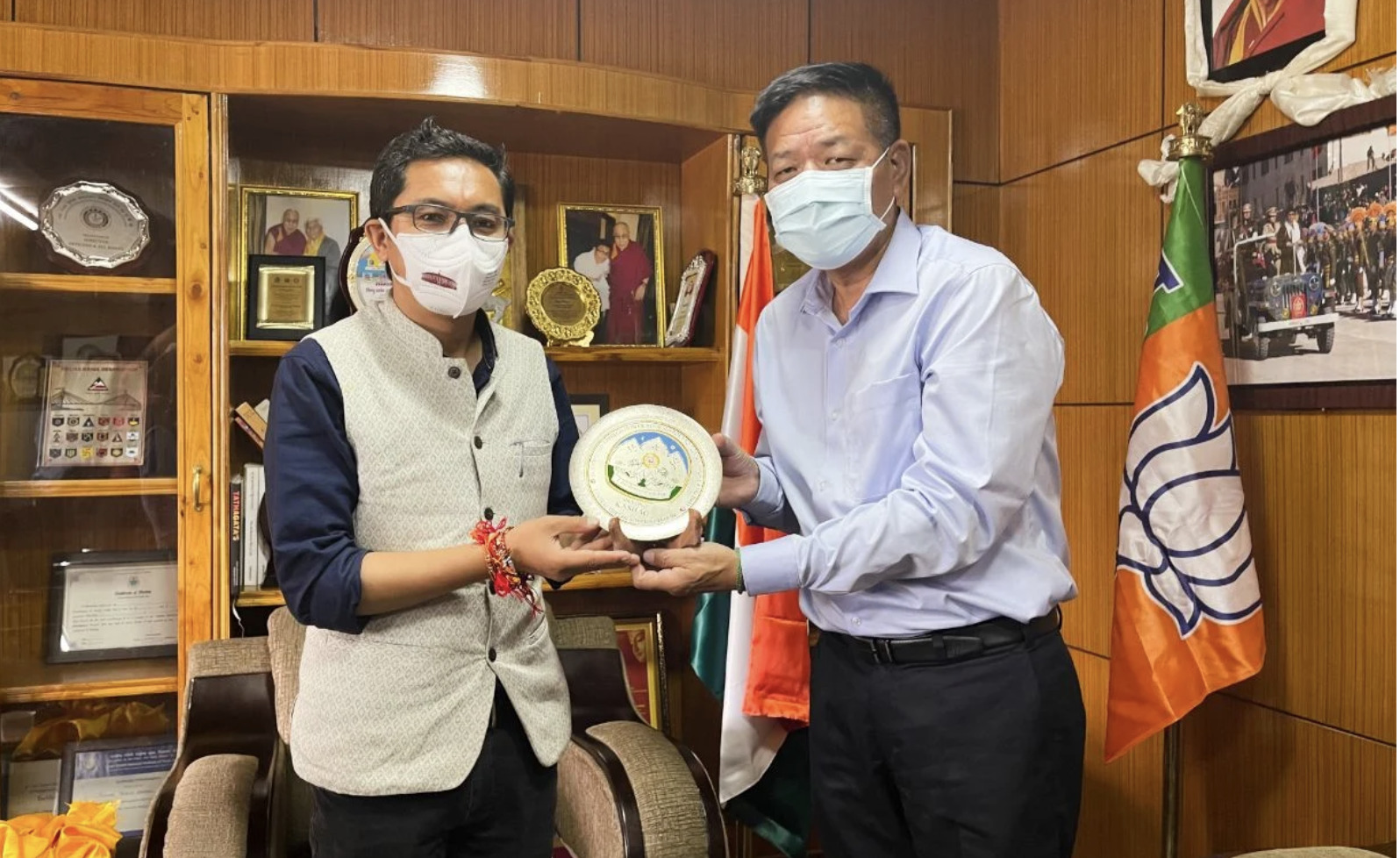 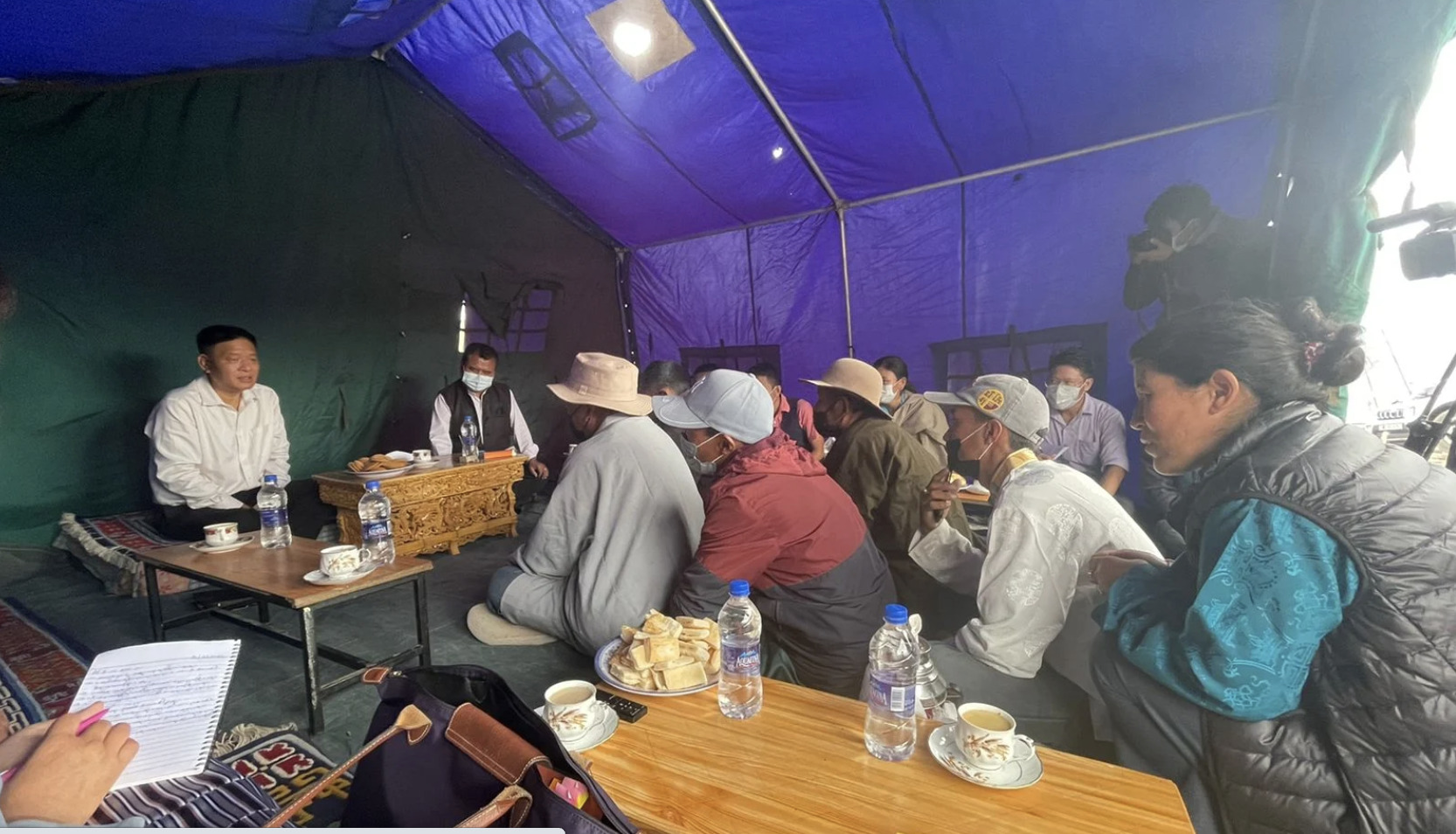 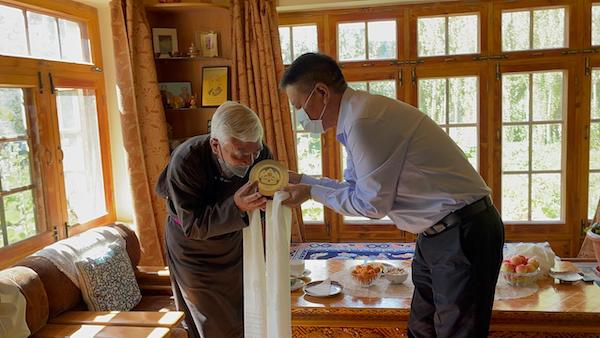 Sikyong offering an emblem of CTA as a memento to Shri Thupten TSewang, former member of Indian Parliament from Ladakh. 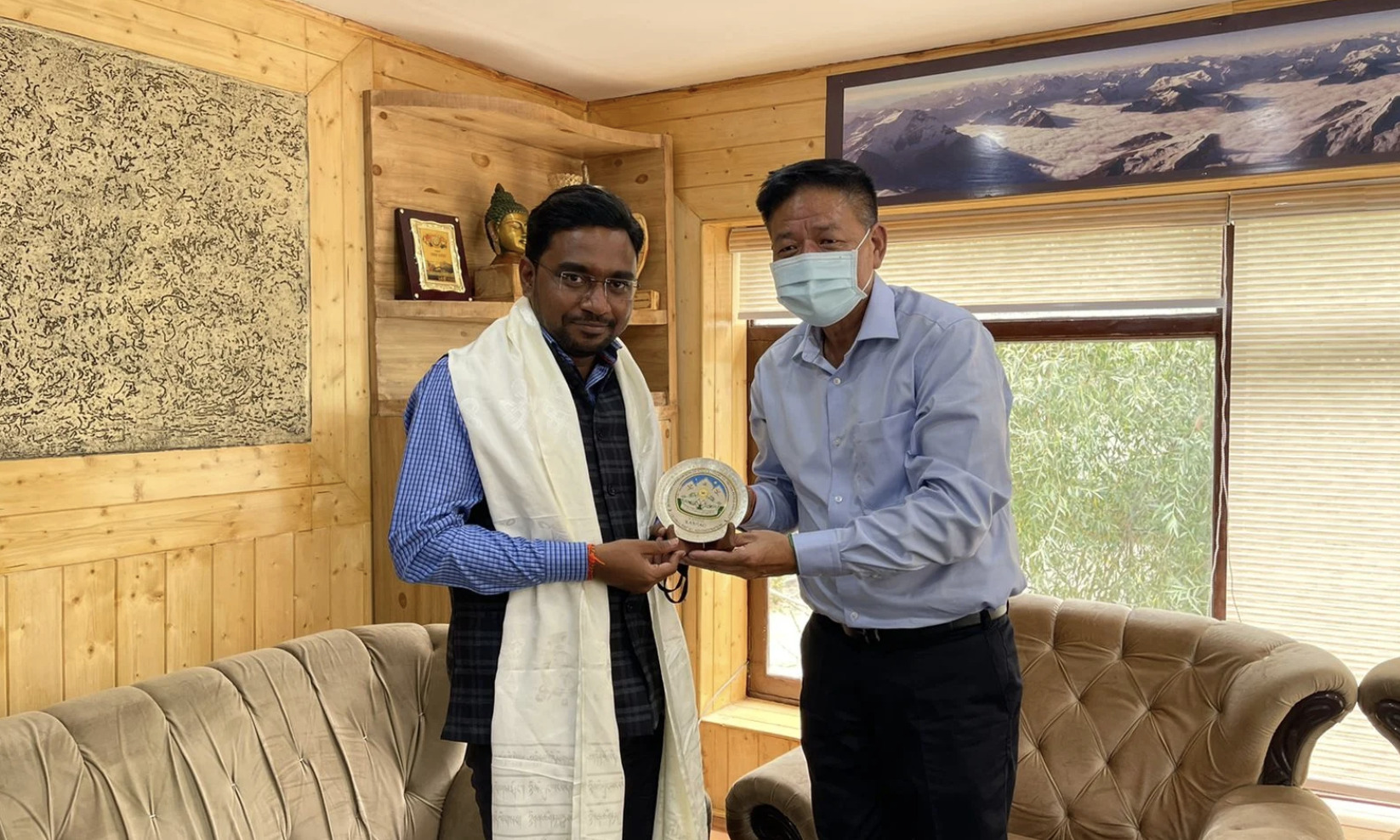