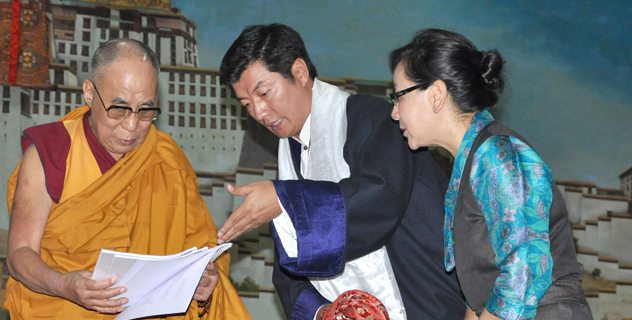 Tibetan political leader Dr Lobsang Sangay presents documents to His Holiness the Dalai Lama on Middle Way policy campaign at TCV school in Dharamsala, India, on 5 June 2014.. Also seen in the picture is Dicki Chhoyang, the Kalon for the Department of Information & International Relations of the Central Tibetan Administration, which is spearheading the Middle Way Approach Campaign/DIIR photo

Four years after talks reached a stalemate in 2010 and following the self-immolation of 130 Tibetans since 2009, Dr. Lobsang Sangay said the Middle Way Approach Campaign would help people across the globe understand exactly what the Tibetan people were calling for – genuine autonomy.

“The Middle Way Approach information materials – including an interactive website, short documentary video, Social Media campaign, timeline of the Tibetan struggle and FAQs – many of them available in 7 languages including Chinese – will make it very easy for people around the world to understand exactly what the Tibetan administration is proposing in terms of genuine autonomy within China,” Dr. Sangay said.

“With the Middle Way Approach Campaign, we are trying to engage the international community – young people, diplomats, media, people from all walks of life across different nations — to counter the Chinese Government’s misinformation campaign about the policy.

“By visiting our website (www.middlewayapproach.org OR www.tibet.net/mwa) they will learn the exact nature and intent of the policy, and then by clicking on through to such forums as our UMAYLAM page on Facebook and making a ‘Like’ or ‘Share’ they can show their support for the Middle Way.”

The Middle Way Approach is already supported by international leaders including US President Barack Obama and many Chinese intellectuals, such as imprisoned Nobel Peace Laureate, Liu Xiaobo. The name, the Middle Way, refers to ‘the middle way’ between repression and separation.

Dr. Sangay said the Central Tibetan Administration (CTA) had spent the past year creating a set of documents and multimedia materials that would make it clear how long His Holiness and the Tibetan administration had stuck firm to this policy, about its impact to date and its intentions for the future.

During an auspicious inauguration ceremony today, the Sikyong presented His Holiness the Dalai Lama – who has devolved his political responsibilities to the elected leader – with the information package.

He said that His Holiness and the then-Tibetan administration formulated the “Middle Away Approach” policy in 1974 as a realistic option to solve the issue of Tibet.  This foresight of His Holiness was affirmed in 1979 when Chinese paramount leader, Deng Xiaoping, stated that, “apart from independence, all issues can be discussed” and offered talks with His Holiness.

His Holiness presented the Middle Way Approach to the Chinese leader, and a long period of contact and discussions between Dharamsala and Beijing resulted.

“Since this time, there have been 9 Rounds of Talks, four fact-finding delegations to Tibet and regular visits by Tibetans to the Tibetan regions,” Dr. Sangay said

“We are calling on the people of the world – young and old – to join the UMAYLAM: Middle Way Approach Campaign and help secure the future of the Tibetan people.”

There are 6 million Tibetans in Tibet, and another 150,000 around the world.